what i'm reading: the skin we're in by desmond cole 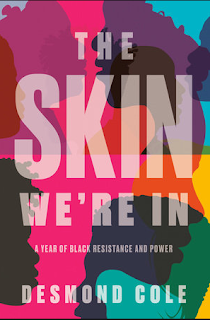 Alternative title: It Happens in Canada, Too.

Desmond Cole's book, The Skin We're In: A Year of Black Resistance and Power may be a difficult book for white Canadians to read. That's exactly why they should read it.

Cole documents events most Canadians would call "US-style" racism -- except they all take place in Canada. He uncovers historical anti-Black bias in Canada's immigration policies, ongoing anti-Black racism in its public schools, racism embedded in false historical narratives, and racist policing on the streets -- in short, systemic racism.

In the early days of this blog, before we had even emigrated to Canada, my partner asked if there was a Canadian equivalent of Howard Zinn's A People's History of the United States -- a counternarrative that tells the often invisible stories of injustice and resistance. Readers  said that kind of history wasn't really necessary in Canada, because Canada's view of itself and its own history was more honest than America's.

That deserves one massive call of bullshit.

I'm not suggesting that wmtc readers were bullshitting us. Merely that Canadians think they know the real history of Canada, flaws and faults along with pride and heroics. This is simply not true. Exhibit A: the revelations about the Residential School system that attempted to destroy Indigenous culture and subjugate Indigenous people. Most Canadians were not taught about this in public schools. It was not part of Canada's official history. Without the Truth and Reconciliation Commission and the Calls to Action, this ignorance would have continued in perpetuity.
Is it better in Canada than in the US? I think so. But that's easy for me to say, I'll never personally experience systemic racism. Desmond Cole has been stopped by police more than 50 times. And if Canada is better than the U.S., is that the best we can do?
What does "better than the US" mean to Dafonte Miller? To Regis Korchinski-Paquet and Chantel Moore? To the thousands of young Black men subjected to random stops and searches -- known as carding in Canada and but more aptly named stop-and-frisk in New York City. To the Somali refugees and Haitian immigrants whose families have been illegally broken up and put at grave risk? To the Black Canadian school children subjected to the presence of police in their schools?
This excellent article in the Guardian from June 2020 -- "Canada urged to open its eyes to systemic racism in wake of police violence" -- puts it clearly and succinctly.

... political leaders’ resistance to the idea that systemic racism exists within state institutions often comes from a poor understanding of the country’s past, says educator and historian Natasha Henry, president of the Ontario Black History Society.
“It’s part of the Canadian national narrative of positioning ourselves in juxtaposition to the United States. That’s how we get this ‘exceptional Canada’ of being welcoming and warm – and not paying attention to our own parallel history of racial exclusion and the dispossession.”
In addition to being factually inaccurate, this popular view speaks to a “refusal to take responsibility” for two centuries of slavery within the country’s history, says Henry.
For generations, Canadian history has concentrated on the country’s position as the last stop on the Underground Railroad – a place which meant freedom for those who escaped slavery in the US. But the same narrative omits the experiences of thousands of enslaved people within Canada, says Henry.
According to Henry’s research, the earliest record of African enslavement in colonial Canada was the sale of a young boy, named Olivier LeJeune in 1629.
Slavery was formally ended in the British empire in 1834, including British North America, but legislation was repeatedly passed that would weaken anti-slavery laws in the years leading up to abolition.
After emancipation, black people in Canada still faced segregation, and the looming threat of hate groups like the Ku Klux Klan.
“You have to decide – are you going to accept all of Canada or none of Canada?” said Henry. “Because you can’t parcel out what you want. That’s not how history works.”

Canadians, if you're ready to confront this -- or even to consider that there may be parts of Canada that you don't yet know or understand -- I urge you to read The Skin We're In.

Desmond Cole has done us a great service. With his unflagging activism, his lively, accessible writing, and his blunt truth-telling, he is helping Canadians to better understand this country, and to consider the experience of Canadians who don't necessarily look like them. If we want Canada to truly be better than the United States, this is a place to start.

Personal footnote: Cole was the keynote speaker at the 2017 CUPE Ontario Library Workers Conference, which I helped organize (post is here).