This week's day trip with my Mom was the town of Sointula. One of my libraries is located in Sointula, so I've been there a couple of times, but had never had an opportunity to explore the town or surrounding Malcolm Island.

Sointula has a fascinating history: it was founded as a socialist, Utopian community by dissident Finnish coal miners! Their vision was equality, community, and self-sufficiency. You can read more about this at a wonderful site that documents Utopian societies in Canada: Canadian Utopias Project.

Allan and I always find it interesting that Vancouver Island tourism info about Sointula omits the words strike and socialism. The radical history of this proud little village is diluted to "people who were searching for a better life" -- which is true, but not quite accurate. And boring! It's as if the very mention of the word strike is enough to incite anger -- or longing, perhaps? -- in potential tourists. In this way and a million others, radical activism is hidden from us.

The town itself is proud of its Finnish and socialist roots. Some families still teach their children Finnish, although it is supposedly one of the most difficult languages in the world to learn. We were pleased to see a photo in the museum showing an event in an old community centre -- the hammer-and-sickle symbol and the words WORKERS OF THE WORLD UNITE clearly visible behind the performers.

Sointula is still a world apart, with its own social-political vibe. Self-sufficiency, independence, and cooperation are the watchwords; in political compass terms, they are left-libertarian. Sointula residents have chosen not to have police on the island. They have a public school, but it's run almost as a community project. The children are all what is now called free-range, but no one calls it that, because it's just normal.

The Sointula library branch does the same amount of "business" -- circulates as many books -- as a typical community four times its size! Their supermarket is a co-op, founded by the original Finnish community in 1909, the oldest, continuously operating store in the province. Instead of a tourist information centre, they have a "resource centre" that serves tourists and residents alike, to help organize borrowable equipment and expertise.

For the tourist, Sointula is a beautiful place to explore. The tiny main street has a cafe (one of two restaurants in town), the co-op, some artist studios, and the building that houses the museum, library, senior centre, and thrift shop.

Bere Point Regional Park gives you incredible mountain views, gorgeous campsites adorned with driftwood art, and a beach where it is said whales come to rub against the rocks. (We went. Obviously we did not see whales, or this would be one hell of a buried lede.) 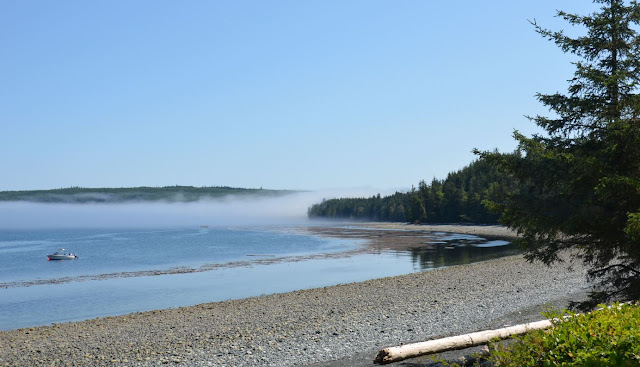 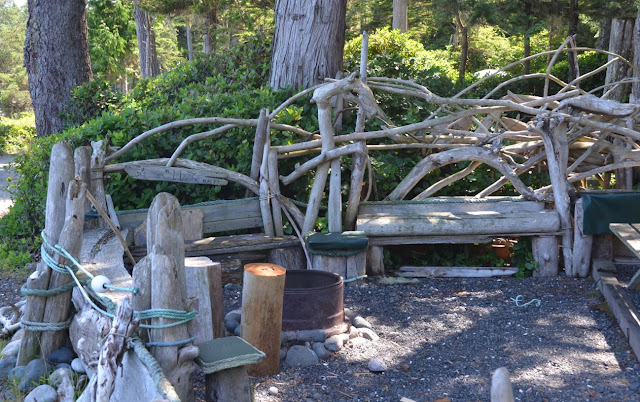 You can stop along the dirt road and play a game of beach checkers. 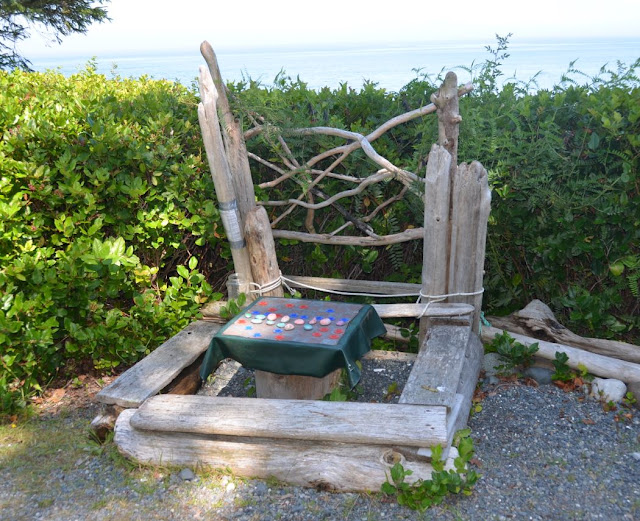 There was a small wooden enclosure that housed tourism pamphlets and a few romance novels left behind by previous campers. You could also learn a little bit about the local birbs. 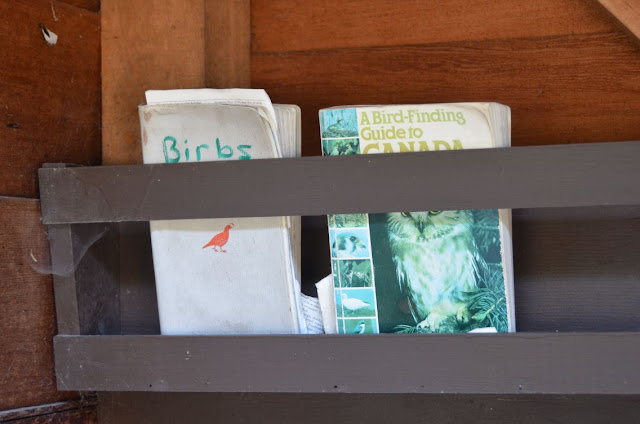 The town is dotted with artist studios, tiny, informal spaces that are open when the artist can be there. In our trip to Newfoundland in 2007, we did a similar art trail in Woody Point. Sointula's is less extensive and more informal, in keeping with the culture there.

There are several hikes and cycling routes that seem wonderful. We drove around and did a few small walks in various places.

On the ferry to Sointula, the bay was completely fogged in, but while we were having lunch at Coho Joe, the fog lifted to reveal a picture-perfect day, cloudless but cool. On the ferry back to Port McNeill, we had beautiful views of the town and all the islands in the area. 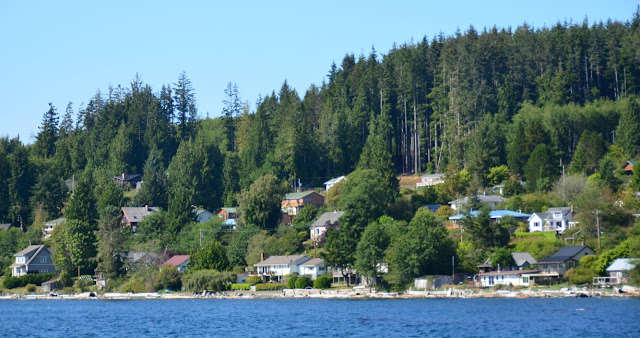 We had dinner in Port McNeill, then on the way home, saw a bear and her cub munching grass on the side of the road. Allan spotted it, and we turned around and drove slowly back. The big bear looked up at the car -- and then a tiny little head poked up, too! They went further into the bush before we could get the camera.

And what North Island day would be complete without seeing several bald eagles? 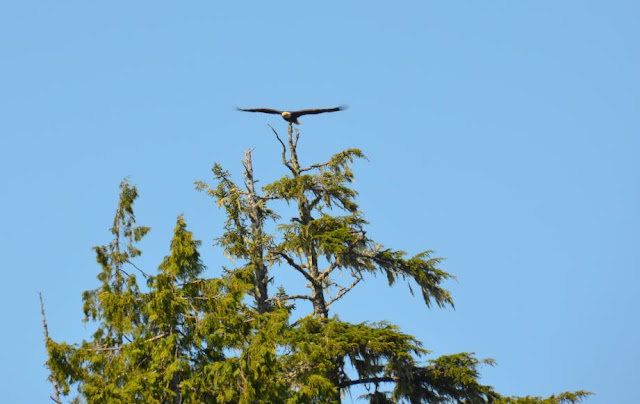