This week's day trip was fascinating, meaningful, and so much fun. We went to Alert Bay, toured the U'mista Cultural Centre (us for the second time, my mom for the first), and participated in a traditional salmon barbeque through Culture Shock.

Know before you go: residential schools and the potlatch ban

On the drive down to Port McNeill, where we get the ferry to both Sointula and Alert Bay, we gave my mom some context for the U'mista exhibits -- both the residential schools and the potlatch ban. We have talked about it before, but I felt a review of sorts would make the day more meaningful. After taking the Indigenous Canada online course through the University of Alberta, I feel more confident summarizing the issues -- a concrete benefit of the course.

If anyone reading this doesn't know about these two horrors of colonization, I encourage you to learn about them both. I'll briefly summarize the issues at the bottom of this post. 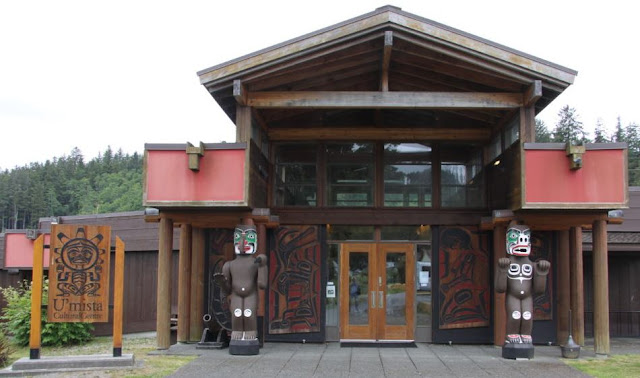 The U'mista Cultural Centre is an amazing museum and learning centre. It's so perfectly done, I honestly can't think of how it could be improved. In fact, I think I'll quote wmtc from our first visit there, lightly edited, then add a few notes below.

U'mista is a small treasure trove of First Nations art, beautifully curated and displayed, and especially notable for how it was acquired. All the objects have been reclaimed and repatriated from museums and private collections. From the late 1800s until the 1950s, as part of its genocidal policies against Indigenous peoples, Canada outlawed potlatch.

Potlatch is a ritual re-distribution of wealth, practiced by the Indigenous peoples of the Pacific Northwest Coast of Canada and the US. About the Coastal peoples, you will hear it said: the wealthiest family is not those acquire the most, but those who give the most away. In a celebration of food, song, and storytelling dance that goes on for days, the wealthier families give food, clothing, other necessities, and also luxuries, to the rest of the community.

At potlatch, ritual masks and robes would be worn for dances that told stories. When the ceremonies were outlawed, the Canadian government confiscated all the regalia. Indigenous scholars and activists have spent decades tracking down and attempting to acquire the stolen objects. Over the decades, too, potlatches were held in secret, and the U'mista Centre honours the courageous individuals who were determined to keep their traditions alive.

I have read about the residential schools, and have learned about other similar situations -- for example, in Australia, depicted in the brilliant, heartbreaking film "Rabbit Proof Fence". I thought I knew how horrifying and disgusting both the schools and the policies were. Yet, when I learned more about them in the online course I'm taking, as bad as I thought it was, it was so much worse. It's painful to contemplate these injustices, but we are obligated to bear witness.

At U'mista, there are also beautiful photographs and displays about Indigenous activists and other community leaders. In the summer, there are cultural tours and sometimes the opportunity to see dances performed. There's also a fantastic gift shop, where everything is most things are made in Canada and Indigenous artists are credited (and, I presume, paid).

New to our second visit

We watched two excellent videos depicting a modern potlatch. One was fashioned in standard documentary style, with a voice-over narrator. It was very good, but I especially loved the more recent update. This film had no narration, and scenes of the natural world were intercut into the footage of potlatch dances. This style gave a deeper understanding of the connectedness of the people to the natural world; the nature scenes provided context for the dances. I loved it.

Both videos were created by members of the Cranmer family, who also operate Culture Shock. One of the Cranmers is consulting on a project I'm working on. (More on that soon.)

Also new to us at the U'mista was an exhibit called The Story Box, about the historic collaboration between Franz Boas, who founded modern anthropology, and George Hunt, his Indigenous research partner. Their work together was groundbreaking, and Hunt continued it after Boas' death. George Hunt was from this area, and the surname Hunt denotes a well-known and influential Indigenous family on the west coast.

As it happens, the reason we hadn't seen this exhibit on our first visit brings us around to the Cranmer family again. "The Story Box" was being shown at Bard College in New York City, and the Cranmers were among the delegates -- dancing, teaching, and participating in the celebration. Corinne Hunt, a formidable Indigenous artist and the great-granddaughter of George Hunt, designed the artwork for the exhibit.

This beautiful brochure from the New York exhibit includes an interview with Corinne Hunt. Here are some photos Allan took of The Story Box exhibit. 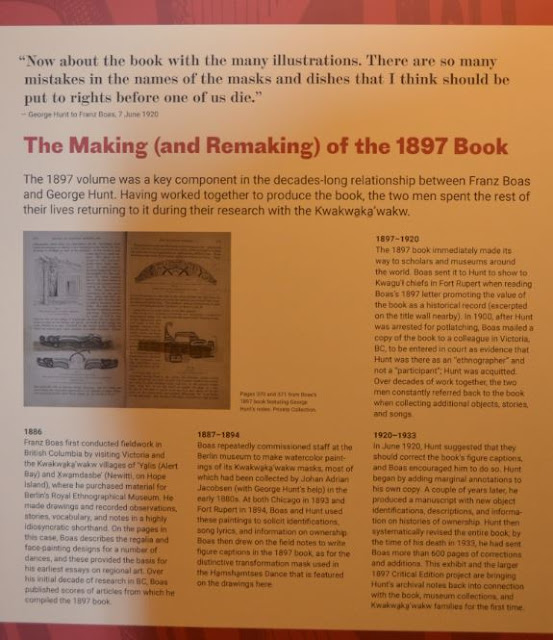 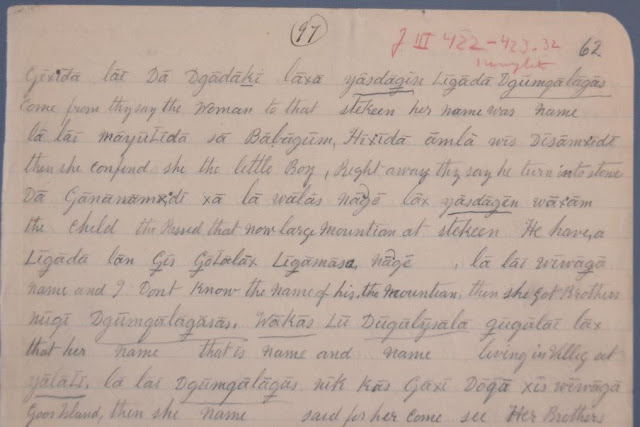 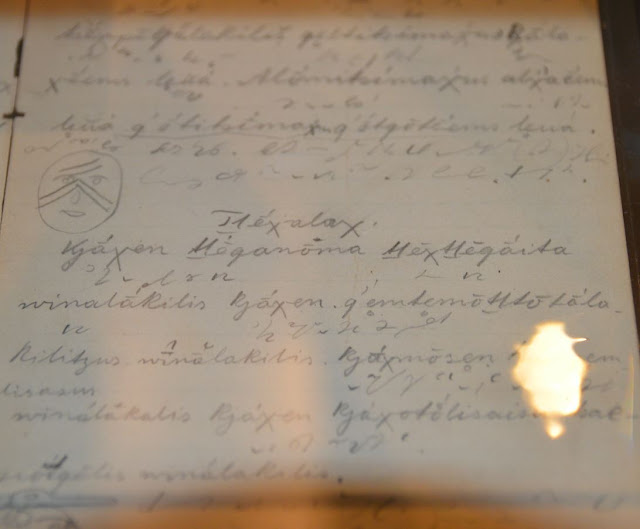 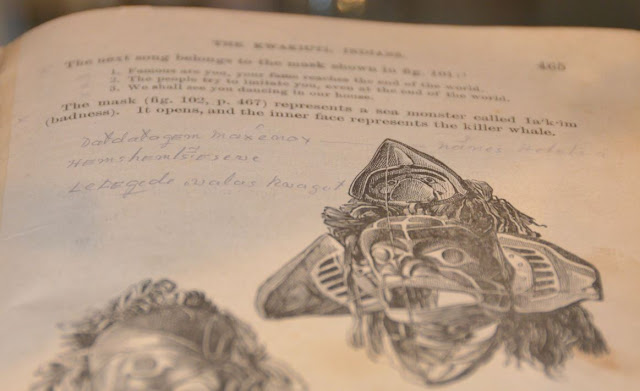 And here are some images from the U'mista's permanent collection.

We had booked in advance a traditional salmon barbeque. Gwantilakw Cranmer walked us through the preparation, talking about the significance of the salmon to her people, both pre-contact and today. Gwinty has been working with salmon all her life and she was an excellent guide. I'll let the pictures tell the story. 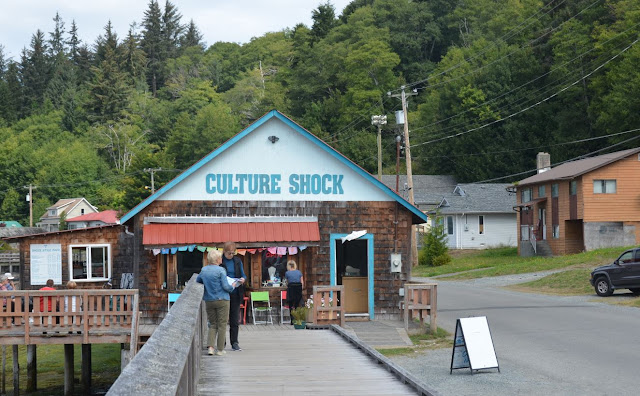 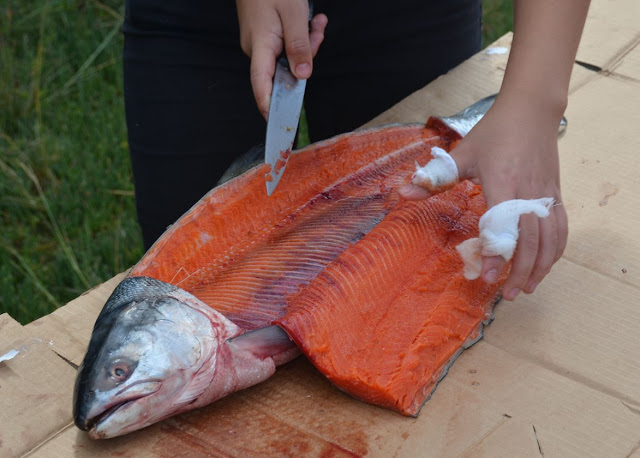 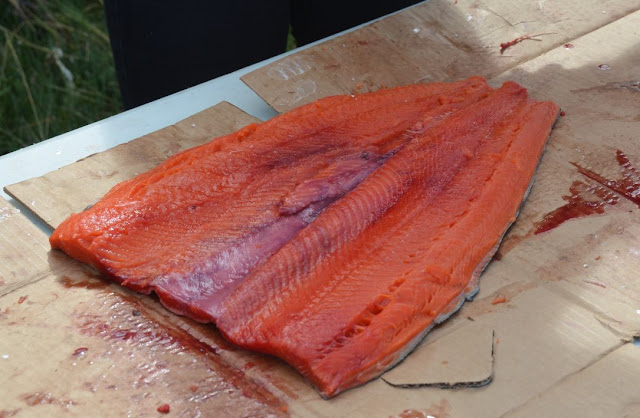 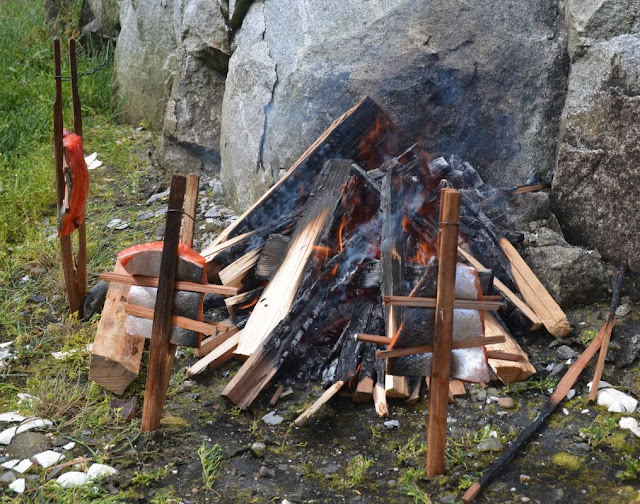 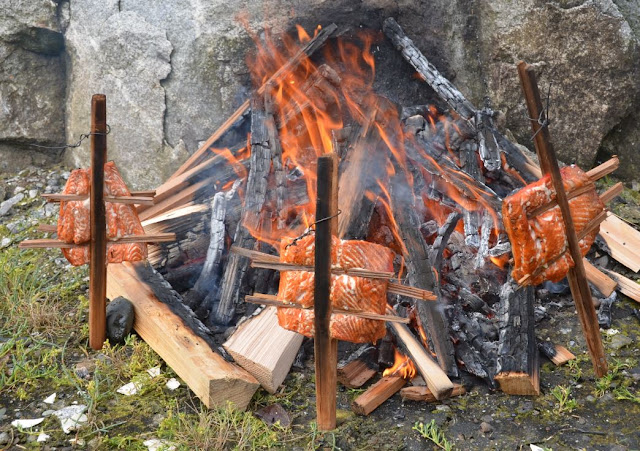 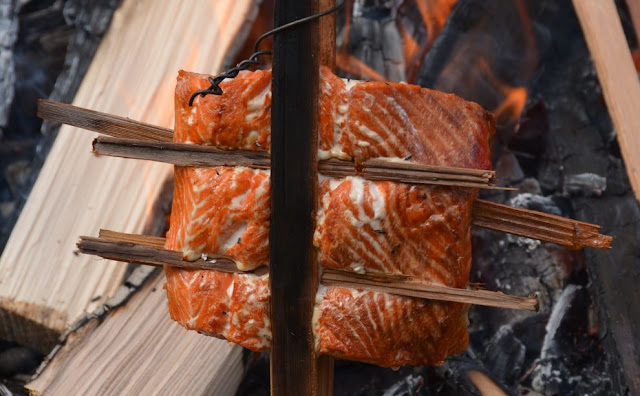 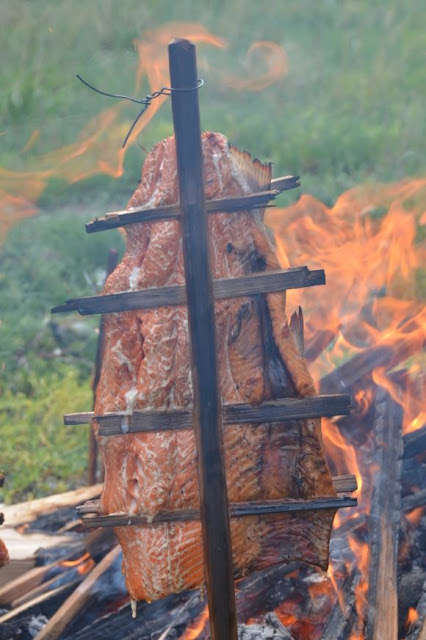 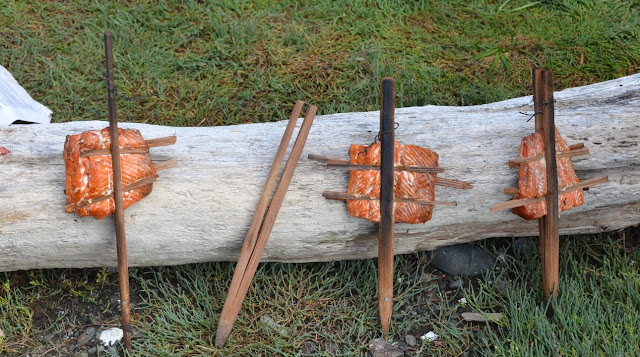 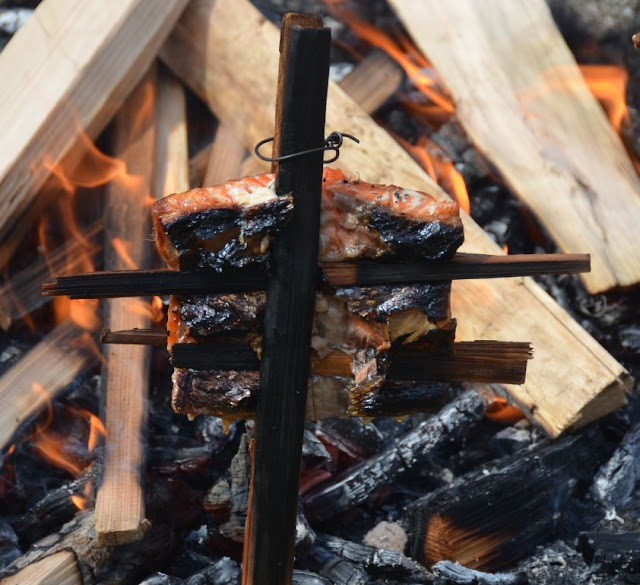 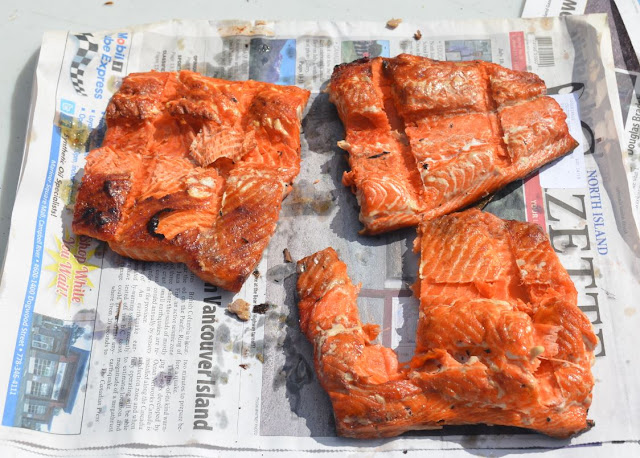 We were cooking the salmon in a little grassy area near the water, where a boulder served as a windbreak. A small crowd of tourists gathered on the boardwalk, looking down at us and asking occasional questions. When the fish was done, we were wondering (to ourselves only) where we were going to eat it, and would we be eating only salmon?

Suddenly out came a table, tablecloth, plates, and a huge amount of food! There was potato salad, a green salad with kale, cabbage, and cranberries, a tray of freshly baked buns, and bannock. Bannock has the consistency of cornbread and is so delicious! There was far more food than we ever could have eaten, and (happily) spoiled our plans for dinner. 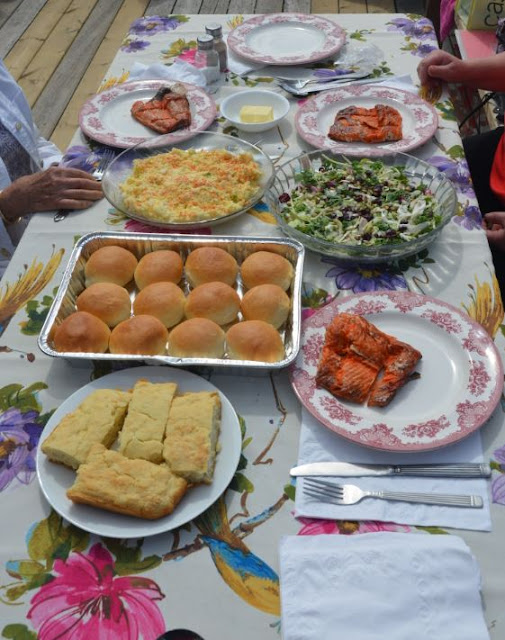 If you visit Alert Bay, this is a very special experience. It may seem a bit pricey, but if you can afford it, it's well worth the money.

The gift shops at both Culture Shock and the U'mista Cultural Centre are among the best I've ever been in. If you love Indigenous art and design, don't miss them.

Interesting note: your admission to the U'mista Centre is good for two visits.

A bit more on the issues

In Canada, "Residential Schools" refers to the system of federally-funded, church-run schools that operated throughout Canada for more than 160 years.

Children were forcibly removed from their homes and sent to live in these "schools" -- more aptly called camps. They were forbidden to speak their language, to use their given names, to wear their hair in their culture's typical ways. The stated goal of the schools was "to kill the Indian in the child".

The children were forced to perform manual labour, which was supposedly their education. Conditions were horrendous. Thousands of children died. Mass graves have been uncovered.

There were also Indian Day Schools. I don't know why some children were forced into those rather than residential schools, but the day schools were similarly horrific.

One of the characteristics shared by almost all Indigenous cultures is an emphasis on family, usually extended family. In oral traditions, knowledge transmitted directly from generation to generation. Skills -- hunting, gardening, cooking, building, healing, everything you can think of -- are learned by observation and participation. Values, morals, and ethics -- all the guideposts of life -- are transmitted through storytelling and observation. From birth to death, every aspect of life is shared communally, and done for the benefit of the new generations, to build for the future.

Now imagine a culture such as this with no children. Villages where all the children have been stolen. The trauma and grief and shame left behind. The despair, the helplessness.

When these children become adults, how can they know how to raise families of their own? They have not seen normal parenting. They lack the supports of their culture and communities. They know only shame and abuse.

These entwined conditions are at the root of the intergenerational trauma that echoes through Indigenous communities in countless destructive ways. The wonder is how people and their cultures have survived at all -- a testament to the determination and resiliency of the human spirit.

As the permanent home for all statements, documents, and other materials gathered by the TRC the NCTR will ensure that:
- former students and their families have access to their own history;
- educators can share the Indian Residential School history with future generations of students;
- researchers can more deeply explore the Residential School experience;
- the public can access historical records and other materials to help foster reconciliation and healing; and
- the history and legacy of the residential school system are never forgotten.

Every Canadian is or should be actively involved in Reconciliation. Reconciliation takes many forms, both institutionally and individually. All Canadian schools must now include the Residential Schools in their history curriculum. Similarly, as a librarian, it is my responsibility to participate in Reconciliation through the library's collections, programs, and service. It's also my job as a human being.

Potlatch is the ritual redistribution of wealth, both a cultural ritual and a form of social welfare. Viewed through a socialist lens, potlatch is decidedly not capitalist. It may not be anti-capitalist, but it's certainly counter-capitalist. Is why it was banned? Or was it simply part of the Canadian project of aggressive colonization and assimilation -- the quest to "kill the Indian"? I suspect it was both.

You can learn more about the potlatch ban and its insidious effects from these excellent sources.
The Umista Centre's virtual museum
The Potlatch Ban - The Bill Reid Centre at Simon Fraser University
Colonialism and the Potlatch Ban - blog of the University of Alberta's Faculty of Law
The "Potlatch Law" and Section 141 - Indigenous Foundations at UBC
Posted by laura k at 8/21/2019 07:27:00 AM