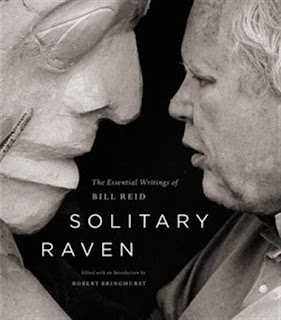 I'm supposed to be writing about the Jackie Robinson biography, which I finished weeks ago, but so far I haven't been motivated to do so. I finished another Wallander mystery -- my "in between" book -- but the next bio on my list, the new one about Frederick Douglass, hasn't come in yet. So I looked for something on my own bookshelf that I've been meaning to read, and found this: Solitary Raven: The Essential Writings of Bill Reid. It is fascinating, and by coincidence, feels very relevant.

We visited Vancouver for the first time in 2016, and I spent a morning enraptured in the Bill Reid Gallery of Northwest Coast Art, still completely innocent of the idea of moving to the west coast.* I love Reid's work, and wanted a meaningful souvenir from the visit. Knowing that Reid was a writer and CBC host before his first major sculpture commission, I purchased this book.

Reid's father was an American of European ancestry, and his mother was Haida -- a fact Reid first learned at age 19. He was 23 when he began exploring his Haida heritage. He studied art, sculpture, and goldsmithing at European art schools and museums, and later -- and for the rest of his life -- immersed himself in Haida culture. Reid's art synthesizes these two traditions into something unique, and for me, something incredibly powerful and beautiful.

Solitary Raven was edited by Robert Bringhurst, a formidable talent of whom I had no knowledge. Bringhurst also wrote an introduction to the book. Here is an excerpt that I found particularly potent.

Many readers may be equally surprised to see Reid, early in this book, speak of Indians as "them," Europeans as "us." Those, however, are the idioms he had learned -- and the person he learned them from was Sophie Gladstone Reid of the Qqaadasghu Qiighawaay, his Haida mother. For her it was the language of denial, but she taught it to her daughter and two sons as the language of acceptance. Two of them absorbed it without apparent question and went on to live unusually successful but otherwise quite normal urban lives in London and Toronto. Bill himself unlearned this language very slowly, suspicious to the last of eager joiners and wary of being one himself. Through art, and not through rhetoric or genetics, he became a Haida artist. But in 1985 -- as soon as the newly amended laws of Canada allowed -- he applied for legal status as an Indian. The petition was not granted until 1988, when he was 68 years old, but he had made his own decision. In February 1986, while addressing a provincial government commission, he asked the committee members a question: Why should the Haidas -- we Haidas -- want this particular morsel of wilderness left untouched?

This book is many things, but one of the most important things it is, in my opinion, is the story of a long and conscious journey from one pronoun to another.

Reid participated in some expeditions to rescue and preserve the great totems from remote, and now empty, villages, where, he writes, keepers of Haida culture had

become convinced that, permanently preserved, the poles would form a better memorial to the past greatness of the Haidas than crumbling to dust in the deserted villages.

Through this, I'm gaining an appreciation for Haida art -- which, according to Reid, bears as much resemblance to most totem poles we see today as Picasso does to paint-by-numbers. I'm also learning a bit about Haida culture, whose great society was wiped out, partly by white men's guns, and mostly by the white man's disease, smallpox. Survivors were then subjected to the abuses and humiliations that is the legacy of colonization.

Longtime readers of this blog know that I have an abiding interest in ancient and indigenous cultures. For a time I wrote about ancient civilization for a children's nonfiction series on history. I was constantly amazed at how much ancient peoples knew, and the complexity and beauty of their creations, all the more so when one considers how little they had to build on. This was true for every culture I studied, from all parts of the world.

The original people of North America are no different, but because they left no monumental works of stone or granite -- and because they were exterminated by the people who wrote our early history -- their ingenuity is much less familiar to us. Discovering more about the Indigenous people of the Americas is always fascinating but painful. Here's an example of the kind of thing I love. Reid's writing is wonderful -- evocative, accessible, breezy, but with heft.

We know they were a fine-looking people, with pride in their race and lineage, never permitting them to live simply on the bounties of their rich seas and forests. They were an ingenious people, using such unlikely materials as shredded cedarbark and spruce roots for basketry and clothing, and, with the most primitive of tools and an infinite knowledge of the materials, falling huge trees and creating almost entirely of wood a great material culture.

It was the sea that shaped the first, and to the end, the most beautiful of these creations, the matchless grace of the Northwest Coast canoe. The cedars grew tall and straight in the rainforests of the north, but it took the experience of generations of skillful men to change their trunks into seagoing boats, sometimes seventy feet long. The log was shaped and hollowed, and then, in the supreme example of primitive genius, the whole thing was steamed by partly filling it with water and adding hot rocks until the water boiled, so it could be spread to the proper beam. This gave the beautiful flaring curve to the sides, and the rough seas dictated the high bow and stern. And so as always, perfect function produced perfect beauty.

But it was when the practical skills and sure sense of design, born of necessity, were applied to the lavish heraldry of ceremonial life that the full splendor of Haida art was born. And though the white man brought disruption and eventual destruction to these people, he also brought a flood of new wealth and new tools to augment the stone hammers and adzes and the few iron knives they had had before. And so for a little while, during the first two-thirds of the last century, creativity on the west coast flourished as it never had before and perhaps never will again. In every village on the Charlottes [the Queen Charlotte Islands, or Haida Gwaii], totem poles grew in a rich profusion: forests of strange birds, beasts and heroic figures almost obscuring even the massive lodges they decorated.

This is a lovely book, full of beautiful photographs of Reid's work. I wish I could see and walk among the culture he writes about.

* Postscript: I am aware that Bill Reid had and has many detractors. I've read a bit of the criticisms, and find them irrelevant to my enjoyment and understanding of art. I respectfully request that you do not explain them to me here. Thank you for your cooperation.
Posted by laura k at 2/27/2019 03:53:00 PM