how to eat tuna

Some years ago, after reading about overfishing and the horrendous state of our oceans, I vowed to stop eating tuna. Certain species of tuna are on the brink of extinction, thanks to soaring demand and modern fishing methods. Plus, the "eating fish is good for you" equation has changed because of the presence of mercury in many fish, especially tuna. I decided to put tuna in the same category as veal and lobster -- animal products I no longer eat.

Alas, while I have no problem foregoing lobster or veal, tuna was a promise I couldn't keep. I don't know how long I lasted, but five years later I was writing about homemade vs. Whole Foods tuna salad. (If you're reading the old posts, there's an update here.)

Fish and shellfish are mainstays of my diet. We eat a lot of salmon (Pacific only) and shrimp, occasionally halibut, Pacific cod, squid, and other shellfish -- and I eat a lot of tuna. I joke that I'm going to turn into a thermometer. But I don't stop eating it. In fact I eat more tuna now than I ever did. 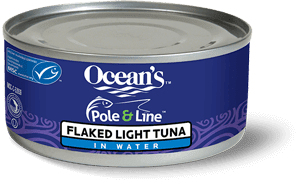 In an effort to ameliorate the ill effects on both my health and the environment, I've now changed from albacore (so-called "white") canned tuna to skipjack (strangely called "light") tuna. Albacore is much higher in mercury, and the fish are threatened; skipjack is lower in mercury and can be fished sustainably. Skipjack is also (supposedly) more ocean-friendly: if the label says "pole-and-line-caught," supposedly it actually is, whereas claims of "dolphin safe" albacore are likely false. Skipjack is also less expensive than albacore, although I don't find the price difference significant.

But changing from white to light -- from albacore to skipjack -- meant more than just a change in buying habits. Albacore is mild enough to use in salads with just a bit of dressing, and it needs very little help to become delicious tuna salad. Skipjack has a stronger, "fishier" taste. Most people would agree it needs more preparation.

I normally don't use measurements for something like this, I just throw everything together, but that's not very useful as a recipe to pass along. So this week I carefully measured, tasted, and measured again, and this is what I came up with.

The recipe is meant as a ratio, to be multiplied depending on how many cans you're making. I usually make three or four cans at a time. Be sure to use tuna packed in water, not oil. 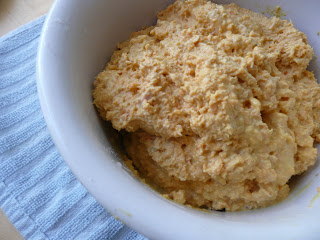 This tuna salad is great on whole-grain toast with sliced tomato and cucumber, or my favourite, whole-grain crackers like Triscuits or Wheat Thins.
Posted by laura k at 2/11/2019 10:42:00 AM