walking the walk: if canada is serious about reconciliation, the senate must pass bill c-262

Canadians, contact the Senate. Urge them to work together to pass Private Member's Bill C-262, "An Act to ensure that the laws of Canada are in harmony with the United Nations Declaration on the Rights of Indigenous Peoples".

My own letter included at the end of this post, in the hope that it will help you write your own. 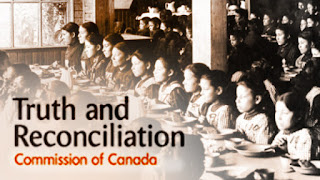 Territorial acknowledgements, long a feature of labour and other progressive activism, have entered the mainstream. More Canadian children will learn about the system of forced family separation, indoctrination, and horrific abuse euphemistically called "the residential schools". Good, and good.

But what of Canadian law? What of business practices? Will it be business as usual, or will anything change?

The TRC offered 94 Calls to Action. How many will be implemented?

After all, Canada was one of only four countries to oppose the United Nations Declaration on the Rights of Indigenous Peoples when it was first adopted in 2007. (The others are obvious: the US, Australia, and New Zealand.)

Almost ten years passed before Canada finally became a signatory to UNDRIP. But its principles have not been put into action in any meaningful way.

In its 2015 election platform, Justin Trudeau's Liberal Party pledged to change that. Not that we had any reason to believe them. First the Liberal government announced that Canada would drop its opposition to UNDRIP, and commit to "fully adopting this and working to implement it within the laws of Canada."

Shortly after that, Minister of Justice [sic] Jody Wilson-Raybould described the adoption of UNDRIP as "unworkable" and "a political distraction".

It wasn't long before Trudeau confirmed that, despite the tears, all was status quo: Indigenous people "don’t have a veto" about pipeline development and other extraction and energy projects. One of the key principles of UNDRIP is the need for governments to obtain "free, prior and informed consent" from Indigenous peoples prior to these projects. Is that going to happen in Canada? 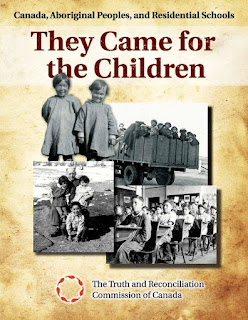 This is a country that -- despite undergoing the Truth and Reconciliation process -- refused to accept the word genocide to describe its historic relationship with its Indigenous peoples. Instead, Canada used an invented phrase with no real definition: cultural genocide.

If you have any doubts as to whether the experience of Indigenous people in Canada constitutes genocide, here's an excellent piece to help you clarify. Writer Jesse Stainforth concludes:

I'm not so attached to my country to contort myself into defending our history of genocide — and I'd like to ask those who are: how would admitting that our country was guilty of this crime against humanity change your relation to this nation, to yourself, and to Indigenous people?

As of the closing of the TRC, the facts of the Canadian genocide of Indigenous peoples are now a part of the official record of this country's history, both for those who wish to face it, and those who wish to pretend it isn't there. These facts stand and will not change, because they are in the past. In the present day, it is only Canadians who can change — and will have to change — in order to acknowledge the disgraceful but fixed facts of our history.

So all this brings me back to Bill C-262. Responding to familiar objections, Amnesty Canada writes:

Bill C-262 is about moving ahead with implementation of the UN Declaration on the Rights of Indigenous Peoples in a principled and coordinated way. It does not attempt to turn the UN Declaration into a piece of federal law. Instead, it would create a requirement for the federal government to work with Indigenous peoples to develop a national strategy for implementation. This would include review and reform of existing laws. Critically, the Bill would require regular reporting to Parliament on the progress that has been made.

I confess I feel quite cynical about the prospect for meaningful change, knowing as I do the history of capitalism and of empire. The all-consuming profit motive will not be derailed, or even detoured, by ethical and moral concerns. But I won't let that stop me from trying.

If you look at the status of Bill C-262, it's not difficult to see what's going on. The Senate is engaged in a series of partisan stalling tactics as the clock runs down on the current government. If the bill is not adopted by the time a new election is called in October 2019, a historic and critical opportunity will be lost.

Canadians, contact the Senate. Tell them to stop stalling and pass Bill C-262.

Amnesty International Canada has the names and addresses here. Write a few sentences or a few paragraphs. Hit send, or print and send it off, no postage required. It is literally the least we can do.

[A brief introduction. It's always good to include a couple of sentences about who you are, what you do, where you live.]

I strongly support Bill C-262 as an important tool to further reconciliation with Canada’s First Nations, and I urge all Senators to work together to make this important bill a law.

Bill C-262 outlines a framework for the Canadian government to fulfill its promise to fully implement the UN Declaration on the Rights of Indigenous Peoples (UNDRIP), as called for by the Truth and Reconciliation Commission. Words are easy, but concrete actions require a clear plan to move forward. In order for there to be meaningful and ongoing reconciliation, Canadian laws need to reflect a commitment to the UNDRIP. Without this, reconciliation will never be more than words on paper.

Canada can never right the immense historic crimes against the original people of this land. But the Truth and Reconciliation Commission has given us hope for the future – if we begin to make their Calls to Action a reality.

There cannot be meaningful movement towards that goal if Canadian laws are still built on a foundation of colonization and subjugation. Bill C-262 provides a framework to take the next, necessary steps.

The House of Commons has passed Bill C-262. Now it’s your turn. I urge you to work with together to bring Bill C-262 to a vote in the current session of Parliament. I look forward to hearing from you about this important matter.