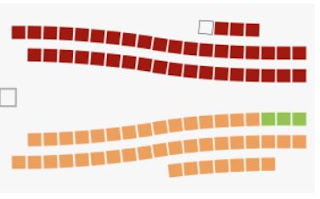 With all the personal blathering I've been doing, I forgot to write about something very important! There was a by-election here in BC: a seat in Nanaimo would determine if the not-really-coalition government -- the balance of power a mere one seat! -- would survive.

Translation for USians. In the last provincial election in BC, neither of the two major parties -- the NDP (you remember the NDP, right?) or the Liberals -- received enough seats to form a government. For the first time in Canadian history, the "balance of power" was held by the Green Party. The Greens agreed to support the NDP, so the NDP was able to form a minority government. It's not actually a coalition, but in order to stay in power, the NDP must work with the Greens.

To make things more confusing for Americans, the BC Liberal Party, which was defeated, is very conservative. The word liberal here is closer to the UK meaning of the word than to the US meaning -- not flaming right-wingers, but something like a moderate Republican. Kind of like Bill and Hillary Clinton.

More recently in BC, the provincial representative (called an MLA) from Nanaimo -- right here on Vancouver Island -- was elected mayor of that city. He was NDP, so that should be good for the residents of Nanaimo. But it meant that there would be a by-election -- an off-cycle election, for that one seat.

There have been a lot of issues on the Island -- the same social issues that haunt towns and cities everywhere, caused by governments' failure to control the cost of housing, and our society's willingness to allow the most basic human need, shelter, to be subject to the profit system. Add inadequate supports for mental health and addictions, and a lack of good jobs, and you have the usual crises of homelessness, overdoses, crime, and fear.

The difference here, I'm told, is that on Vancouver Island, these issues have been denied and ignored for a long time. Now people are finally talking about reality. Progressive people were concerned that there might be a conservative backlash, and this by-election would be just in time to reflect it.

Apparently Nanaimo voters are smarter than that.

Damn, I love living in a place where the Conservative Party is irrelevant! Yeah, I know the BC Liberals are conservative, but after nine years of Stephen Harper and with Doug Ford destroying what's left of Ontario, these numbers are just so beautiful.

(I looked up the fringe Vancouver Island Party, which wants to make the Island a separate province. Someone should tell their web designer about visual accessibility. No text over images!)