the trials and tribulations (and incredible privilege) of relocating 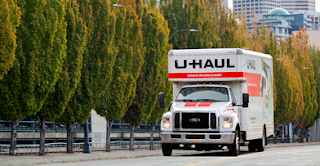 Moving from the GTA to the north island is going to cost a lot more than I thought. And I'm struck by my huge privilege in being able to do this. Let's just label all these moving posts #FirstWorldProblems and get it over with.

When we moved from New York City to the Toronto area, we hired a big, professional moving outfit. It was a very complicated move involving a critically ill dog, a one-way minivan rental that had to be returned to Buffalo, our landing documents, and whatever else. Hiring real movers was expensive, costing about $6,000, but it completely removed the stress from that part of the equation. We had been saving money for a long time and it was part of our Moving to Canada Fund.

During our Vancouver Island trip last April, my brother offered -- several times -- to drive a moving truck for us. He's done this more than once when relocating from New Jersey to Oregon, so he knows what the trip entails and was willing (even happy) to do it again. But I saw that a rental truck would cost around $5,000 anyway, so why go through that? I don't know why I didn't realize that moving to a remote location on Vancouver Island would cost more than twice that much.

We got a few moving quotes that were suspiciously low. How could a move of that distance cost only $3,000? Answer: it can't. Researching the companies online, I read dozens of horror stories, most involving possessions being held hostage as companies demanded thousands more in payment, many involving lawsuits. Still, I had no idea.

We did not expect that. But my brother was ready to spring into action, before I even absorbed the shock. The way I saw it, we had four choices:

1. Get rid of almost everything we own and move to the island with whatever can fit in a small U-Haul trailer behind our little car.

2. Go with cheapo movers and hold our breath.

4. Rent a truck, hire moving crews on both ends, and take my brother up on this incredible offer.

Option 1 is tempting (for me, not for Allan) but really not practical. If we ever had a life that could fit into a small trailer, that ship sailed a very long time ago. We'd have to replace many things -- and we won't live anywhere near stores to do that. We're also not prepared to get rid of all our books.

Option 2 is a non-starter. Why knowingly take that risk?

Option 3 is possible. We have the credit. But that would be a huge weight under which to start our new life. It would take me years to pay off. Unwise.

Option 4 ends up costing about $8,000 anyway, plus our own expenses. Not cheap! But doable. In 2019 we take only staycations -- which will not be a problem in our new location -- and by the end of next year, we're even.

(If you're wondering why we don't split up, one of us drive the truck and the other our car, I am not physically up to driving 5,000 kilometres by myself.)

So Allan and I will take turns driving our little Kia with Diego in the back seat, and my intrepid brother will drive the 26-foot U-Haul.

Labels: immigrating and moving, moving to bc, personal