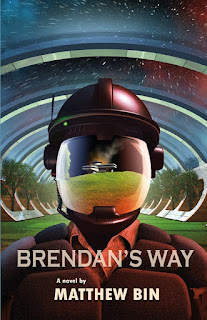 Brendan's Way by Matthew Bin is a genre-blending journey story combining adventure, mystery, and conspiracy in a futuristic setting. It's technically science fiction, as it takes place in the future and features some technology that doesn't yet exist. But if, like me, you don't usually read science fiction, don't let that stop you. It's an engrossing story and a satisfying read.

Brendan is immigrating to a new world. As generation upon generation before him have done, he is filled with hope and dreams of a better life. In this case, the travel is intergalactic, but the conditions on Brendan's home planet are familiar to us, as are the difficult conditions onboard the ship.

To win his passage, Brendan is posing as the husband of a political activist who is traveling undercover on some kind of mission. Brendan doesn't know the details, and doesn't want to know. Being granted the unexpected opportunity to begin life anew on a colonial planet is reason enough to spend three months living beside a beautiful woman.

Once onboard, Brendan begins to sense that things are not that simple. His fake wife mistreats him and refuses to give him any explanation or information. As his attempts to investigate are thwarted, he realizes that the ship's destination and its mission may not be what the hopeful immigrants have been told. But how to learn more, and who can be trusted, are not easily sorted.

Most of the action of Brendan's Way takes place on the Imran, the giant ship that is a future version of the great ocean liners of the past. Through vivid descriptions -- the tiny cubicles of the living quarters for the "colonials", a marketplace that is a vast bazaar of delights and dangers, the common area where the colonials scramble for food rations -- the Imran becomes a character in the novel. The sense of place is very strong.

With so many people living in close quarters, and a conspiracy of agents who may be getting closer to the truth, the authoritarian control of the ship becomes harsher and more desperate. The suspense grows, as does the claustrophobia. When Brendan finally discovers the truth, everything is on the line.
Posted by laura k at 3/13/2018 04:00:00 AM