from the front lines, day 10

Five of our members reported on the early-morning disruption of traffic coming into the parking garages!

As we were picketing the entrance to the Civic Center parking garage this morning, word came down that Library Director Rose Vespa was spotted in the line of cars — we created a back-up as far as Rathburn! — so anticipation was running high: flags were waving, whistles were blowing, and chants were chanted ("Rose Vespa, be a leader! Be a leader, now!"). As she approached the City Centre garage entrance, Rose gave us a timid wave and proceeded to the entrance to the library garage — where another group of members awaited. Rather than enter the library garage, Rose continued to Burnhamthorpe and went around the block, apparently parking in the Living Arts Centre.

Realizing that there was no underground connection between the Living Arts Centre and the Civic Centre, a bunch of us hustled to the north side of the Civic Centre to await her arrival. Sure enough, after a few minutes she emerged and made her way across to the Civic Centre entrance. I was a little late arriving to the scene, but our members stationed there greeted her with signs, flags, whistles, and chants. All members were civil and respectful during the entire process. I feel that this "blockade" of the Civic Center parking garage was our most effective demonstration yet.

It was an exciting morning! Many of us were at the north exec doors when the street was closing down, so a small contingent waited there and the rest of us went to the east side entrance. They were not blocking the entrance at that time, so we decided it was high time to start. Many of the city staff were supportive and waited patiently, but others were furious! The line extended as far as the eye could see. Someone said that Rose was waiting in the line.

When the car in front of Rose was held back, it became obvious that she was going to go straight rather than in that entrance. The car was let through and the chants/whistles were super loud. A few members actually stepped into the road to block her and security asked them to get back on the sidewalk. The group started towards the Central entrance chanting and whistling, etc. when Rose decided rather than being held up by her "valued staff" (!) she was going to drive around - even though she spent all that time waiting in line! It was about 10 AM by that time. Several people went back to the north side by Civic Centre rightly guessing that she was going to park at Living Arts and walk across.

Apparently, Rose crossed the street with an escort. Several people, mostly pages, were chanting and yelling at her to do something. The staff she encountered in the Civic Centre said she was polite and said, Good morning. We believe that she notified security that she was in line because two or three city security came out before she made it to the front of the line.

It was a very exciting day at the Parking Garages. The level of excitement in the Rose cat & mouse was riveting.

The Exec garage was off limits - that road was closed due to Ribfest. Picketers blocked CC and Library parking entrances. When they found that drivers were going in the Civic Centre exit they blocked that as well. This tactic was so successful that traffic was backed up right to the 403. RibFest trucks were also in the mix so it was noisy.

Soon after I got there Rose was identified in the jam sometime after 9 AM. We chanted: "Rose Vespa be a leader - Be a leader now!" She ignored us. We were prepared to block her at whatever entrance she used. When she got to the CC lot entrance, members spontaneously fanned out on the street in front of her and chanted. A rental security guard herded them back and Rose drove past this entrance. She also drove by the library lot and turned right at Burhamthorpe.

We assumed she would either park at the Living Arts Centre or try to come back thinking we'd given up. A small group walked up to LAC. Rose walked out of LAC (no underground walkway) and crossed to CC. Our group met her there and chanted. Rose kept her head down and rushed into CC.

Princess Royal Drive was being closed to set up carnival rides for Ribfest. A majority of members moved from the Executive Parking Garage and started to block all the entrances to the Civic Center and Central Library. At some point, a member realized that Rose was in the line of traffic attempting to enter the building. She ended up bypassing both entrances and parked in the Living Arts Center parking. We chanted "Rose Vespa, be a leader! Be a leader NOW!" We also did a very vocal: "What do we want? JUSTICE! When do we want it? NOW!"

As we turned the corner onto Duke of York, we noticed Rose's car almost parallel to us. We continued on to the main entrance to inform the other members that she was in the line of cars. It appeared as if Rose had a bit of a nervous smile on her face. As soon as Rose was in front of the exit driveway, we started us with our chants.

Once she passed us, I continued to the main entrance garage and participated in a couple of more Rose chants. We realized that she had no intention of entering there, so I hurried over to the library entrance to give them a heads up. Seeing that blocked by us, Rose sped up and turned right.

I decided to head back towards the executive entrance on the chance she would end up in that vicinity once more. We stopped at the back doors of City Hall. There was a large gathering of people at the far corner. We saw Rose and another woman halfway across the road. We started the Rose chant. She had a nervous smile as she made her way into City Hall. She avoided all eye contact with us. Each time we said the chant, we got louder, until the door closed.

The bargaining team met today to regroup and strategize. Our rep led us through an interesting reflection exercise about the strike -- what's going well, what we're gaining through the process, what are the challenges. The positive column was WAY longer than the negative! And the few negatives were just down to lack of experience and a steep learning curve.

Tomorrow a few representatives of the bargaining team will meet with a few reps of the Employer. We don't know what to expect, but at least we'll be communicating. 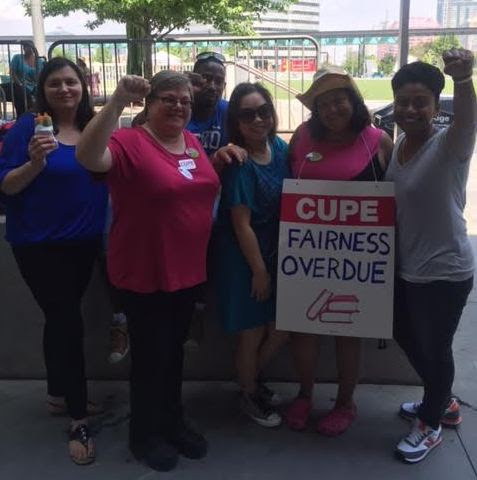 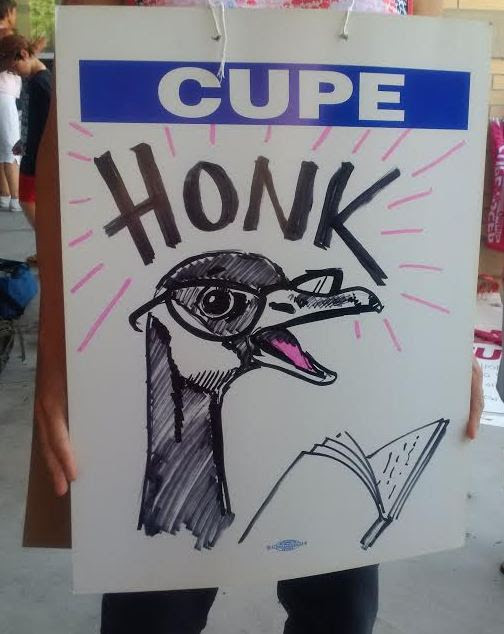 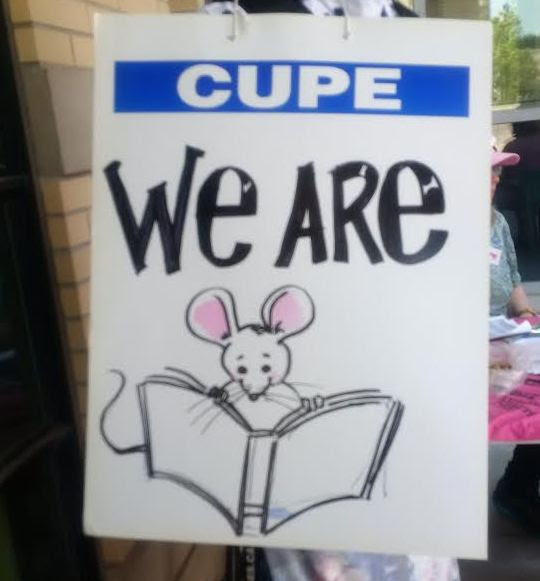