This week I received email from my friend Alan, formerly known in this blog as Alan with one L, or AW1L.

Out-of-Towner [leaning into packed Uptown Express [2 or 3] train]: "Does anybody know if this goes to Times Square?"

About 10 Passengers [as one--all with exactly the same *annoyed* tone]: "Yes!"

I loved this little story! I loved that AW1L thought of me when this happened. It also made me feel homesick and wistful for my old hometown. I replied, in part, "Sometimes I miss my old life. No one I know now would even understand what's so great about this!" I don't know if that's true, but sometimes I'm astonished by how much my life has changed since moving to Canada.

Now I'll use this email and those wistful feelings as an excuse to post these NYC items. One has been sitting in Blogger drafts for five years! 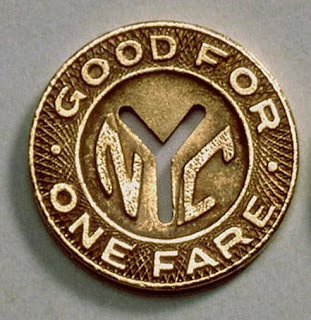 From 2010: A History of New York in 50 Objects, worth a click, including some comments. Coffee cups, sewing machine, an oyster. But... a Metropass and no token??

From 1904 to 1948 subway riders paid their fare with ordinary coins. But since its introduction in 1953, the token has been an absolutely iconic feature of the City. It was phased out when the Metropass was introduced in 2003. Thumbs down for Metropass-but-no-token on this list!

An enduring piece of New York City through the ages can be seen here, documenting the subway tiles and mosaics found on each line and in each station: NY Train Project.

Also from The New York Times, although much more recently, some features on NYC time travel. If the New York Times is writing about it, you can be sure it's on its way out, but they're good stories just the same: Regilding the Gilded Age in New York, and Five Ways to Time Travel (and Party) in New York.

Here's another bit of New York City time travel, something once iconic, and now seldom seen. 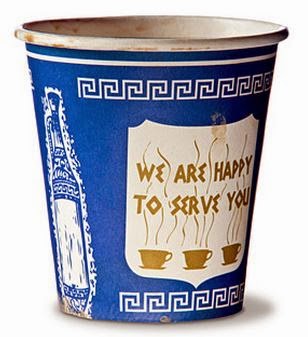