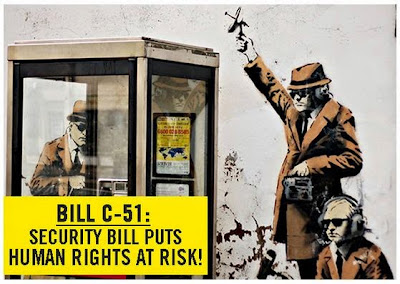 Tomorrow - Saturday, March 14 - there will be protests across Canada against Stephen Harper's latest assault on democracy and free speech - Bill C-51 ("The Anti-terrorism Act 2015").

The introduction of C-51 comes on the heels of news that the Communications Security Establishment, Canada's spy agency, is operating a covert, mass surveillance program that monitors the online activities of millions of Internet users around the world. Ron Deibert, a professor at the University of Toronto, likened the CSE program to a "giant X-ray machine over all our digital lives. . . . Everything single thing that you do . . . is being archived, collected and analyzed."

To find out where the nearest rally is to you, click here or here. (Information about the Toronto rally is here.)

C-51 will expand the mandate of the Canadian Security Intelligence Service (CSIS) while also allowing the Conservatives to increase their crackdown on legal political dissent.

Paul Champ, a civil liberties lawyer, said there are serious concerns that C-51 "is going to target not just terrorists who are involved in criminal activity, but people who are protesting against different Canadian government policies." Indeed, an internal RCMP report from January 2014, obtained by Greenpeace, reported that the so-called "anti-petroleum" movement is a growing security threat to Canada.

C-51 would relax privacy restrictions, lower the legal threshold for police to obtain a warrant, and allow Canadian authorities to hold suspects without charges for as long as one year. The Toronto Star reported the bill would give 17 security agencies "access to any information in any government department on any Canadian".

Elizabeth May, leader of the Green Party, has sharply criticized the bill, saying it would "allow the Conservatives to turn CSIS into a secret police force". After some initial waffling, NDP leader Thomas Mulcair has spoken out against C-51.

Silencing of dissent appears to be one of the bill's main goals. When May asked the public safety and justice ministers during question period if C-51 could be applied to non-violent civil disobedience, such as blockading along a pipeline route, she did not receive a direct answer.

Harper and the Conservatives remain hostile to transparency and accountability. CSIS's internal watchdog was eliminated by the Conservatives in 2012 and C-51 offers little in the way of additional oversight. University of Ottawa law professor Craig Forcese says the Conservatives want to return to an era when the security services were free to engage in illegal, dirty tricks. He wrote that the bill creates a "secret jurisprudence on when CSIS can act beyond the law".

We must speak out against such obvious anti-democratic activities and resist Harper's totalitarian measures.
Posted by laura k at 3/13/2015 07:00:00 AM