what i'm reading: the golden compass by philip pullman 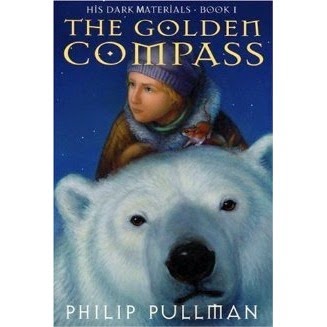 The Golden Compass, by Philip Pullman, has been on my to-read list since it was first published in the mid-1990s. Although I generally don't read fantasy fiction, after reading an outstanding review in The New York Times Book Review, I was very intrigued. Thanks to the Teen Book Club I facilitate at the library, I recently had an excuse to read it: The Golden Compass (published as Northern Lights in the UK) is our March title.

This is an absolutely wonderful book. Lyra Belacqua, a smart, spunky 11-year-old girl, is wholly believeable as our powerful, but very human, hero. She lives in a world recognizable to us, but different - a parallel universe which unfolds naturally, without the ponderous world-building that I find so tedious in more typical adult fantasy fiction.

The book is chock-full of adventure, mystery, and action, with just the right touch of thoughtful reflection thrown in. It's an excellent youth or tween read, which is to say it's fast-paced, written in a clear and straightforward style, and with the darker, scarier, and potentially violent material handled with discretion and a gentle touch. There is sadness and loss and frightening elements, as there should be, but there's nothing graphic.

The Golden Compass is sometimes called a youth novel, but it lives on the younger side of that spectrum, perfect for a 10- or 11-year-old who is a good reader. Why, then, is it catalogued in the adult section of our library? I can only speculate that it might have been a response to "challenges" - meaning controversy and calls for banning or limiting access in the library.

To an adult reader, the reason for the challenges - though silly, in my view - are obvious. On the surface The Golden Compass is a straightforward fantasy-adventure, but on another level it can be read as a critique of The Church. The book is certainly not anti-religion or anti-spirituality, but it is a harsh condemnation of the institutional Church - the Church of the Inquisition, the Church of intolerance, and most of all, the Church that has harbored and protected known pedophiles for centuries, allowing countless children's lives to be shattered.

There are other aspects to which some Christian readers might object: our hero is herself identified with Christ imagery. But I believe the principal objections would focus on a negative portrayal of the institution of organized religion.

Some critics see Pullman's His Dark Materials trilogy (The Golden Compass is book one) as a response to C. S. Lewis' The Narnia Chronicles, with its clearly Christian underpinnings. Not being a reader of fantasy, and never having read Narnia (I read and enjoyed The Lion, the Witch and the Wardrobe as a child, but stopped there), I can't comment on these critiques. There are many comparisons online, but most focus on film adaptations - not a reliable way to critique a book!

For most families, such questions will be beside the point. Attentive as I was, I was unable to find anything anti-religious in the movie, which works above all as an adventure. The film centers on a young girl named Lyra (Dakota Blue Richards), in an alternative universe vaguely like Victorian England. An orphan raised by the scholars of a university not unlike Oxford or Cambridge, she is the niece of Lord Asriel (Daniel Craig), who entrusts her with the last surviving Alethiometer, or Golden Compass, a device that quite simply tells the truth. The Magisterium has a horror of the truth, because it represents an alternative to its thought control; the battle in the movie is about no less than man's preservation of free will.

One of the better pieces I've found on this subject was by Jenn Northington, writing on Tor.com, for Banned Books Week 2013.

One could argue that while the disdain for organized religion and bureaucracy registers in Pullman’s books as well as in his interviews, it doesn’t prevent them from containing all kinds of mystical elements. There are witches with super powers, embodied souls in the form of daemons, a trip to the underworld. One could further say that they promote a sense of spirituality and a belief in the possibility of things beyond our comprehension. There’s a word for that; some call it faith. This argument, of course, is unlikely to hold weight with anyone who objects to the series. In matters of taste there can be no dispute, and each reader finds something different in a book.

If The Golden Compass works equally well as a great children's read, and a response to a famous fantasy series, and a critique of a social institution, that is quite a feat, and Pullman deserves huge recognition for pulling it off. The symbolic meanings are there for discussion and debate, but the solid base of the book is vivid, highly accessible, and simply excellent.
Posted by laura k at 3/29/2015 06:00:00 AM