Right now there are no American women who were of reproductive age prior to Roe v. Wade, the 1973 Supreme Court decision legalizing abortion. Yet reproductive rights in the US have never been more threatened. 2011 marked the passage of the most state-level restrictive abortion laws ever. 2012 saw the second-highest.

More than half of all US women of reproductive age (15–44) now live in a state that is hostile to abortion rights. Ten years ago, it was fewer than one-third.

The Guttmacher Institute has produced a series of infographics to illustrate the state of reproductive rights in the US. They are encouraging allies to share them widely. 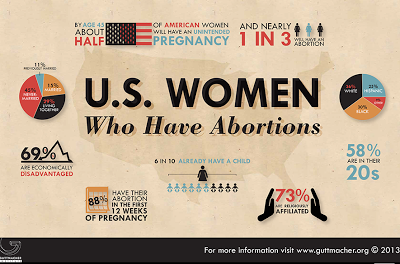 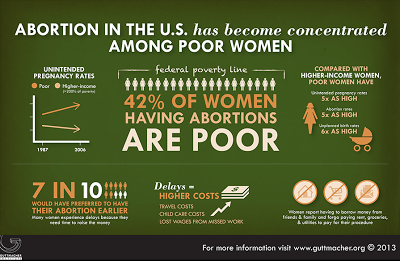 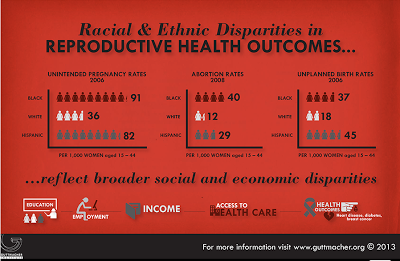 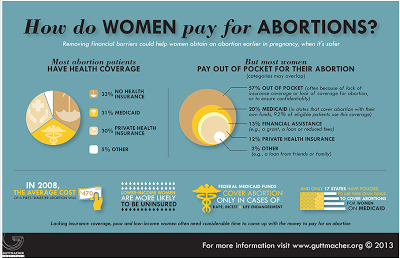 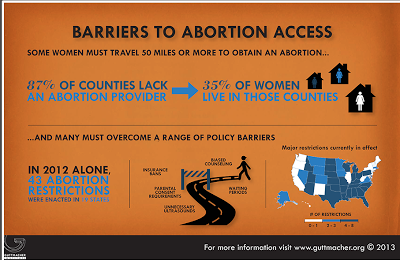 What happens to women who want abortions and can't obtain one? We're finally getting some actual data to answer that question. Annalee Newitz at io9 reports.

Public health researchers with the UC San Francisco group Advancing New Standards in Reproductive Health (ANSIRH) used data from 956 women who sought abortions at 30 different abortion clinics around the U.S. 182 of them were turned away. The researchers, led by Diana Greene Foster, followed and did intensive interviews with these women, who ran the gamut of abortion experiences. Some obtained abortions easily, for some it was a struggle to get them, and some were denied abortions because their pregnancies had lasted a few days beyond the gestational limits of their local clinics. Two weeks ago, the research group presented what they'd learned after two years of the planned five-year, longitudinal "Turnaway Study" at the recent American Public Health Association conference in San Francisco.

Here's the short version of what they discovered, from a post they made on the Global Turnaway Study Facebook page:

It's an excellent article about the study's preliminary findings. You can read more at The Turnaway Study website, along with their plans for further research.

Next week, Canadian women celebrate 25 years of legal abortion access. If you're in the Toronto area on Monday, January 28, come find out how Canadian women won the right to abortion, and what we must do to keep it. More about this soon: here's the event on Facebook.

And finally, one last thought about reproductive freedom, which I've lifted (and edited) from a Tweet making the rounds.

Do you support abortion? Only if absolutely necessary. Like when a woman is pregnant and she doesn't want to be.