in toronto: noah richler, u.s. war resisters, and the militarization of canadian culture

Something else I resumed after quitting my crappy day-job: attending events with friends, or, socializing through activism. Few things make me happier. I have four events to blog about. 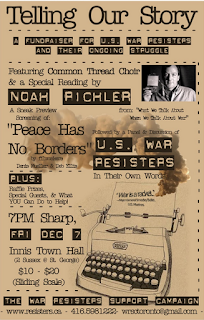 Last Friday night at Innis Hall, the War Resisters Support Campaign put on "Telling Our Story: A Fundraiser for U.S. War Resisters and Their Ongoing Struggle". The evening began with songs of hope and struggle sung by Common Thread Chorus. Common Thread's music is beautiful, but their orientation to the world is what's really impressive. They sing songs of peace, social justice, and struggle, and are committed to full accessibility - to breaking down barriers of participation. I recommend reading their inspiring history.

Next, Canadian author Noah Richler spoke strongly and unequivocally against the dangers of the current political regime in Canada. That US war resisters must even make this fight to stay in Canada is, he said, nonsensical and shameful, as the war resisters are being used as pawns in a devious political game. He called out Harper, Kenney, Baird - and Rick Hillier, and Ezra Levant - and the rest of the gang for lacking the courage to engage with public opinion, as they "trample" the Canada "that I hope still exists".

Richler spoke for so many people, I think, when he said that Canadians don't know what to do to get their country back, don't know how to go about it. But, he stressed, we must make the effort. We must try any way we can think of, as that is the only way these terrible changes will be undone.

Richler recalled another War Resisters Support Campaign event that he attended, right there in the same Innis Hall. That event that was a watershed moment for the Campaign, the night (former) CBC radio host Andy Barrie moderated a panel of war resisters. After that night, Richler says, he called then-interim Liberal Party Leader Michael Ignatieff, who "hemmed and hawed" and muttered things about "contracts" and "our obligations to our allies".

Richler spoke about "standing up" to show we are smart, and powerful, that we oppose the militarization of Canadian culture are not "a bunch of hippy dippy flower power" people. We might agree that there are occasions when a war must be fought - the war against South African apartheid, for example. But wars should be fought with gravitas and great lament, not with glee and Don Cherry theatrics.

Richler wonders if the Canada he remembers and yearns for - the open society, the peaceful Canada - was the aberration, and perhaps this "warrior nation" is the real Canada. He had always believed that Canadians were aware of their "extraordinary good fortune," and that such good fortune came with the obligation to help the rest of the world. And to those ends, war was a last resort, and fought only to increase the common good.

His book, Richler said, is about the Canadian war in Afghanistan, and how we "talk ourselves into, around, and through it". He said it hasn't been the easiest book to speak about publicly, especially in a political climate that frames everything in stark binaries, the "you're either with us or with the child pornographers" mindset, especially as the war in Afghanistan has allowed all kinds of things to happen at home. And especially as the war becomes invisible. But he also drew the distinction between the courage to type some words on a page and speak about them and the courage to leave one's country and one's home, to say "no" to most powerful military in history, to stand for peace when it means risking prison.

Richler spoke about the cult of the hero, the mindless adulation of anyone in uniform, which he increasingly sees everywhere in Canada. He quoted the great poet and conscientious objector e e cummings. For the current Canadian government, Richler said, our "moral indignation is almost too easy to come by" - and it's useless, since they refuse to engage with us. Comparing some of Prime Minister Stephen Harper's stunts to a "tinpot dictator from Africa," Richler urged us all to "make these people look ridiculous and get them out as soon as possible".

After that, we watched a 14-minute preview of "Peace Has No Borders," Denis Mueller and Deb Ellis's upcoming film about US war resisters in Canada and our campaign to Let Them Stay. If this documentary is as good as Denis's other films - "Howard Zinn: You Can't Be Neutral on a Moving Train" and "The FBI's War on Black America" - it will be very exciting.

Dale Landry began the war resisters speaking portion of the evening by asking the audience to take out their wallet and look at their money: comparing the old $20 bill, which featured a beautiful First Nations sculpture, and the new $20 bill, with its Vimy Ridge memorial. Dale talked about how this encapsulates the change in Canadian culture, even since he's been in Canada, the new militarization of Canadian society.

Christian Kjar spoke about growing up revering the US military, feeling that wearing the uniform of the United States Marine Corps was something akin to being a superhero. But in basic training - when he was trained to scream Kill! Kill! Kill! as he attacked a figure with his bayonet, hearing Muslim people referred to in the most racist, derogatory terms possible - because they were the enemy, and had to be dehumanized so they could be killed - he knew something was wrong. He started reading the groundbreaking blog "Baghdad Burning", by the woman known as Riverbend, and finally, his girlfriend at the time bragged about killing some Iraqi civilians. He knew he had to leave.

Christian, who is now married to a Canadian woman (a friend of mine, and a librarian!), says he misses home every day. He misses his family, and he misses California weather, and most of all, he struggles with the stress of living a life in limbo.

Ashlea Brockway spoke briefly about the huge difference having a service dog has made for her husband, Jeremy Brockway, and their family.

Together, the three war resisters told the story of their commitment to peace, and the price they have paid.

Over the next weeks and months, the War Resisters Support Campaign will initiate a broad outreach campaign to build on the mobilization in support of the Rivera family. And we will continue to build the campaign to repeal Immigration Minister Jason Kenney's discriminatory Operational Bulletin 202.

To donate, go to the ChipIn page, or mail a cheque to: