fighting for democracy in the courts and in the street: #idlenomore, democracy 24/7

I no longer see TV news, but I have it on good authority that if your primary news source is CBC's The National, you haven't been hearing about two important developing - and exciting - stories. 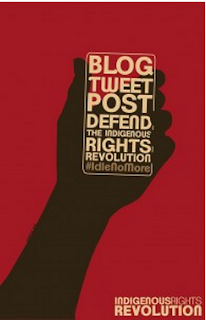 Idle No More is a campaign led by First Nations peoples to fight back against Canada's destruction of natural resources and its continued profiting from Native lands. The movement, including a hunger strike by Chief Theresa Spence, is being framed as opposition to the Harper Government's latest omnibus budget bill (C-45). It is that, but it's also much more. In their own words:

The Treaties are nation to nation agreements between Canada and First Nations who are sovereign nations. The Treaties are agreements that cannot be altered or broken by one side of the two Nations. The spirit and intent of the Treaty agreements meant that First Nations peoples would share the land, but retain their inherent rights to lands and resources. Instead, First Nations have experienced a history of colonization which has resulted in outstanding land claims, lack of resources and unequal funding for services such as education and housing.

Canada has become one of the wealthiest countries in the world by using the land and resources. Canadian mining, logging, oil and fishing companies are the most powerful in the world due to land and resources. Some of the poorest First Nations communities (such as Attawapiskat) have mines or other developments on their land but do not get a share of the profit. The taking of resources has left many lands and waters poisoned – the animals and plants are dying in many areas in Canada. We cannot live without the land and water. We have laws older than this colonial government about how to live with the land.

Currently, this government is trying to pass many laws so that reserve lands can also be bought and sold by big companies to get profit from resources. They are promising to share this time. . . Why would these promises be different from past promises? We will be left with nothing but poisoned water, land and air. This is an attempt to take away sovereignty and the inherent right to land and resources from First Nations peoples.

There are many examples of other countries moving towards sustainability, and we must demand sustainable development as well. We believe in healthy, just, equitable and sustainable communities and have a vision and plan of how to build them.

Please join us in creating this vision.

You can read more background in this excellent article: Idle No More: There's good reason the Natives are Restless by Chelsea Vowel, who blogs as âpihtawikosisân, and follow the movement on Twitter at #IdleNoMore. Also worth reading: Elizabeth May's speech in opposition to C-45: Bill C-45 is an affront to democracy.

If you subscribe to the Council of Canadians' email list, you've been receiving daily updates on one of the most important court cases of our time: the election fraud challenge.

By now we should all know this is not about robocalls. It's about the Conservative Party's widespread and sustained pattern of vote suppression. That is, election fraud. That is, stolen election.

It's bad enough when up to 49% of votes in any riding can be wiped out by the first-past-the-post system. But when individual voters are singled out for vote suppression based on their past patterns of voting... we are in deep trouble.

I highly recommend following the proceedings, which began this past Monday, December 10. There are multiple ways to access it - live blogs, live tweets, daily updates - all listed here.

The Conservatives are represented by one of the richest law firms in Canada (where I used to work!). The side representing defrauded voters - representing us - is being financed by ordinary Canadians, chipping in a few dollars at a time. You can donate any amount to the Democracy 24/7 Fund. Personally, I can't make a large donation, but when I have an extra $10, I email it to this fund. Over time, those tens add up.
Posted by laura k at 12/14/2012 06:00:00 AM