Tragic. Criminal. Completely unnecessary. The alpha female known as 832F is dead. She was murdered. 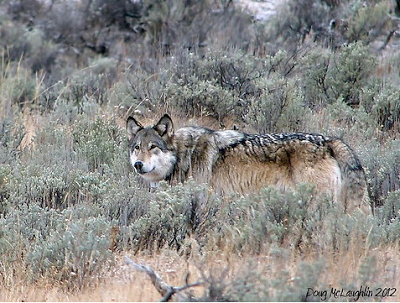 Yellowstone National Park’s best-known wolf, beloved by many tourists and valued by scientists who tracked its movements, was shot and killed on Thursday outside the park’s boundaries, Wyoming wildlife officials reported.

The wolf, known as 832F to researchers, was the alpha female of the park’s highly visible Lamar Canyon pack and had become so well known that some wildlife watchers referred to her as a “rock star.” The animal had been a tourist favorite for most of the past six years.

The wolf was fitted with a $4,000 collar with GPS tracking technology, which is being returned, said Daniel Stahler, a project director for Yellowstone’s wolf program. Based on data from the wolf’s collar, researchers knew that her pack rarely ventured outside the park, and then only for brief periods, Dr. Stahler said.

This year’s hunting season in the northern Rockies has been especially controversial because of the high numbers of popular wolves and wolves fitted with research collars that have been killed just outside Yellowstone in Idaho, Montana and Wyoming.

Wolf hunts, sanctioned by recent federal and state rules applying to the northern Rockies, have been fiercely debated in the region. The wolf population has rebounded since they were reintroduced in the mid-1990s to counter their extirpation a few years earlier. . . .

The deaths have dismayed scientists who track wolves to study their habits, population spread and threats to their survival. Still, some found 832F’s death to be particularly disheartening.

“She is the most famous wolf in the world,” said Jimmy Jones, a wildlife photographer who lives in Los Angeles and whose portrait of 832F appears in the current issue of the magazine American Scientist.

Wildlife advocates say that the wolf populations are not large enough to withstand state-sanctioned harvests and that the animals attract tourist money. Yellowstone’s scenic Lamar Valley has been one of the most reliable places to view wolves in the northern Rockies, and it attracts scores of visitors every year.

The wolf wowed scientists and tourists alike with her size and a strength so great that she could “take down animals on her own,” said Daniel Stahler, a park wildlife biologist.

She also led the pack in Yellowstone’s northeastern Lamar Valley, an area rich in bison and elk that has a road offering vantage points for wildlife watchers equipped with cameras and spotting scopes. The Lamar Canyon pack could be counted on to roam the valley near dawn and dusk, allowing scientists and tourists to observe wolf behavior at a level of detail rarely seen outside National Geographic specials.

(Wolf 832F, named thus by the park biologists who collared her, has also been known to wolf watchers as 06 (oh-six) because 2006 was her birth year.)

Marc Cooke, a member of the advocacy group Wolves of the Rockies, said he was moved by the way that 832F cared for her pups, bringing them food and snarling ferociously at animals that posed any threat to them.

“She was an amazing mother,” Mr. Cooke said. “When I heard she died, I felt like I lost a family member.”

To illustrate the bigotry and ignorance the marks the other side of the wolf issue, here is a quote from the above article.

Gary Marbut, president of the Montana Shooting Sports Association, likened the admiration for 832F to romanticizing “a psychotic predator stalking Central Park and slitting the throats of unwary visitors.”

The human serial killer is an aberration. His killing does only harm. Perhaps some maladjustment in his brain causes him to lust for murder.

A wolf does not kill for sport. A wolf - like every carnivore - kills to eat and to feed its own young. And, like all predators, the wolf helps the populations of its prey stay strong and healthy.

The wolf does not kill to test its skill, to brag about it on his license plates, to hang heads on a wall, as Gary Marbut and the members of his association might do. I assume the irony is lost on Mr. Marbut.

On the same page as the article about 832F, there is a story about the changing mission of zoos, as tigers and several other large mammals near extinction. And here is a large mammal just barely beginning to thrive again, after being hunted nearly out of existence all over the globe, now threatened by human "sport".