rtod: i ain't marching (to the u.s. polls) anymore 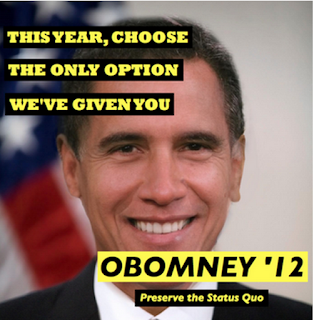 I spent the summer and fall of 2004 working on a Get Out The Vote campaign for the Democrats, not because they were my party of choice, but because I was angry at the prospect of another stolen election, and I wanted to make a difference in the popular vote numbers. After that election was stolen, too, I stopped voting in the US.

Now, in 2012, voter suppression has reached new depths. If I still lived in the US, I don't know if I'd vote Green or not at all. Voting Green can be seen as a protest against the duopoly, and it shows support for a progressive agenda. Voting for any candidate can be seen as an endorsement of the rigged system.

I am entitled to vote in the US election by absentee ballot, but I choose not to engage in that pointless bit of theatre.

One problem with voting is the widely held assumption, seldom questioned, that voting is engagement with the political system - that it's a form of activism. Voting (when the system is fair and not rigged) is certainly very important. But it is also insufficient. For me, the heartbreak of the Obama era is not his capitulation to corporate and military interests, as I never expected anything else, but the terrible squandering of political engagement.

Vast amounts of time and energy were put into electing Obama, then most US progressives sat back and waited for change. Had even half of that effort been put into building a truly progressive movement, it might have made a difference. Change doesn't come from the top down. There has never been and never will be a progressive change in law that did not emanate from a sustained people's movement, one that finally succeeds in dragging along the elected so-called leaders. John F. Kennedy is known as the civil rights President, because the movement that began after World War II, struggled throughout the 1950s, and was finally noticed by the white media in the early 1960s, managed to overcome Kennedy's dread of alienating the white Southern vote.

When I put my recent post about abortion rights in the US on Facebook, an old friend became very angry at me. No pro-choice person can vote for Romney, she said, "so Obama is our choice". (The post doesn't suggest not voting for Obama; it says abortion rights at the federal level are a lost cause.) In response, my friend and comrade John Bell replied:

Go ahead an vote for him on Tuesday, but if on Wednesday you aren't building a movement in the street to kick his ass to the left, you are missing the point. The Chicago teachers beat the Democratic machine in that city by doing just that and frankly I find that more politically significant than this whole, sad election campaign. Women in Canada and their male allies defeated the laws against abortion by building a movement that wouldn't back down, that set up and defended clinics in defiance of the law, and that refused to bow to any party. That is the kind of movement that fueled the Roe victory in the first place, but that movement then stifled itself for a generation for fear of alienating the Democratic Party.

We're seeing great signs of hope in the Occupy movement, especially as it begins to reach beyond its original base and explore ways to broaden and sustain itself.

In keeping with these thoughts, today's Revolutionary Thought of the Day is brought to us by Sharp Pencils, the non-baseball blog of my partner Allan Wood: The Choice Is Theirs.
Posted by laura k at 11/04/2012 05:00:00 AM