corporate greenwashing and the myth of consumer sovereignty 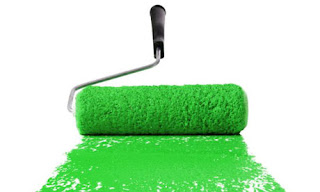 One of the wonderful things about no longer working for Evil Corporate Law Firm - and there are so many! - is no longer contributing to a firm that represents some of skeeviest organizations in the world, including the Conservative Party of Canada. I've worked for many a skeevy law firm, because writing and activism doesn't pay the bills, and a decent salary lets me do good in the world. If I were a lawyer, I hope there'd be a different equation, but as support staff, well, we don't blame fruit pickers for pesticide use.

Like most corporations these days, ECLF proudly displays its green initiatives and offers incentives to get employees involved. A big favourite is one of those "green commute challenge" week, where employees can earn prizes by biking, walking, or taking public transit to work, instead of driving. Nothing wrong with that, right?

Nothing, except that while ECLF is cheerleading for a green commute, it reaps its profits by representing organizations that destroy the earth (and workers). ECLF represents some of the biggest, most notorious extraction companies in the world, and they represent the Conservative Party of Canada, which is actively dismantling this country's environmental protections so that those companies can earn more profits, and which supports the world's dirtiest oil production.

That is one thick coat of greenwash. And the truth underneath is largely invisible.

In addition to corporate greenwashing, the green commute and other similar initiatives promote the myth of consumer sovereignty, which I wrote about most recently in connection with an outstanding book, Too Many People?, by Ian Angus and Simon Butler.

This type of "let's all do our share" activities are all but worthless in their overall emission reductions, and actually might do more harm than good, as they perpetuate the idea that small, individual acts of personal choice are the solution to climate change, while masking the real corporate culprits. The green commute may have personal value, and it does raise important awareness, as I've written about Earth Hour. When I write "all but no value," I mean on the measurable impact on air quality or climate change. And no matter how many ECLF employees sign up for the green commute, their collective action could never compensate for what ECLF itself does. It would be a teaspoon against an ocean.

What's more, gimmicks aside, most people have very little choice about how they commute, because of planning decisions that have kept most working people dependent on cars. Those decisions have been made by governments more interested in a real estate-based economy than in the environment or in the comfort and convenience of working people.

Individual acts matter. But no number of individual acts can compensate for massive corporate environmental destruction that continues, unabated.