omar khadr: what can be said?

Now that Omar Khadr - 26 years old, 11 of those years spent in a concentration camp - is finally in Canada, I find little to say. His mistreatment at the hands of both the US and Canadian governments is horrendous, shameful, and irreversible.

Khadr is still in prison, having had the misfortune of being recruited as a child soldier.

The Harper Government refers to Khadr as a "convicted terrorist," said conviction coming from a show-trial that would have made Joseph Stalin proud. As I wrote recently about another big lie, the saddest part is how many Canadians believe it.

I thank and admire Khadr's legal team, who worked endlessly to make this happen. 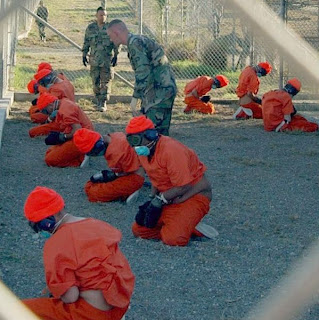 Thanks to Stephen Harper, there was only one "Westerner" still languishing at Guantanamo. (What a bizarre distinction in this circumstance.) What about the other 166 remaining prisoners? What about that, Mr. Obama?
Posted by laura k at 9/30/2012 05:00:00 AM