I can't believe how much I'm loving having access to US Netflix through our Roku device. For the price of a new router and some easy-to-follow instructions, my leisure time has been hugely improved.

This is close to what I've always wanted for TV and movies: true on-demand viewing. Among the things I love: not paying for hundreds of cable channels that I never watch, not searching in vain for anything I might consider watching, being able to sample one or two shows of a series at no cost or inconvenience, watching on a TV (not a computer), convenience, selection. I can easily see this becoming the standard delivery method for all home viewing. Outside the US, after the initial investment in Roku (which we bought for baseball), plus a new router, this costs $16 per month: $8 for Netflix and $8 for the VPN.

At the moment I am gorging on "Commander in Chief," Stephen Bochco's imagining of the first female POTUS, starring Geena Davis and Donald Sutherland. I saw a few episodes when it first ran in 2006, loved it, then lost the thread and the show was cancelled. Being able to find a show like this and tear through every episode is Movie Season heaven.

After finishing the second season of Downton Abbey, we've only seen two movies (as opposed to series) so far, and they were both excellent.

"Into the Abyss" is Werner Herzog's examination of capital punishment, as seen through one case in Texas.

You learn about the crime (a triple murder), the victims, the survivors, one convicted murderer who received a life sentence, and one convicted murderer and state victim who died on death row. You also hear from a former death-row worker. No one who is part of the state death apparatus is allowed to speak publicly.

My only issue with this movie was an unusual number of interjections and interruptions from Herzog during his interviews. He seems to have trouble keeping out of the story, which is very surprising from a master interviewer. Despite this, I highly recommend the film. 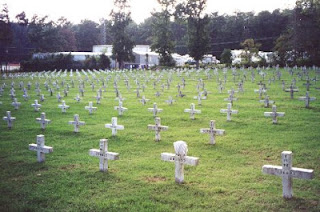 Anonymous, numbered crosses mark the graves of the victims of the state of Texas who had no one to claim their bodies. Thirty-three US states have capital punishment, plus federal and military statutes.

"Resurrect Dead: the Mystery of the Toynbee Tiles" is a documentary about a graffiti mystery: the "Toynbee tiles". I remember seeing this strange message on the street in New York City. I didn't realize they were tiles - I thought they were stencils - and I always assumed they were a graffiti art project. I had no idea there were so-called Toynbee Tiles in some 25 cities, and that their origin and purpose was unknown. 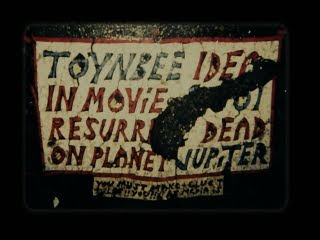