The 2012 London Olympics and Paralympics kick off today, with Opening Ceremonies that are supposed to be completely over-the-top. With a £27 million price tag ($42.5 million Canadian) for those three hours alone, they ought to be. We're told that one billion people worldwide will watch the Opening Ceremonies. I won't be one of them.

I used to love the Olympics - the competition, the ubiquitous underdog stories, the feats of seemingly superhuman ability. I was able to tune out the nationalism and concentrate on the athletes. In the 1990s, when I started writing about disability sports, I shifted my focus to the Paralympics. I felt that competition best embodied the true spirit of amateur sport, and that helped me block out the increasingly disturbing issues surrounding the Olympic games.

These days I can't enjoy the games at all. I get past the corporatism, the nationalism, and the constant blending of the two into a corporate-fascist spectacle.

Right now in London, as the UK is besieged by the continued dismantling of the public sector, as banksters continue to rig the system while workers pay 20% VAT and lose their public libraries, a great city is victimized again by a £9,000,000,000 (that's $14.2 billion Canadian) funnelling of public funds into private coffers.

The residents of London are under siege in a civil liberties crackdown rivalling the horror show Toronto lived through during the G20. Brand Police comb the city for trademark infringements, forcing the owners of an "Olympic Cafe" to change their sign to "Lympic Cafe", and threatening a sausage vendor who sculpted the familiar five rings out of kielbasa with a $30,000 fine. If that sounds funny, consider that these special police have the right to enter homes, shops, and offices without a warrant, and remove signs the Olympic committee has deemed unacceptable. 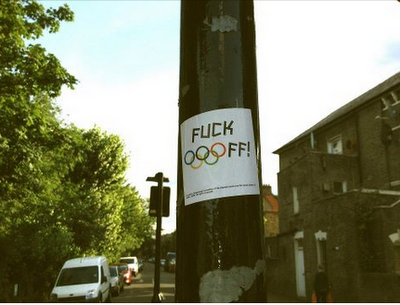 I used to find refuge in the Paralympics, but naturally those games have been infected by the same viruses. Witness Canadian wheelchair racer Josh Cassidy, from the neighbouring town of Oakville, world-record winner of the 2012 Boston Marathon. Cassidy is extremely talented and time was I'd be interviewing him... but the oil pipeline company logo on his chest is just more than I can bear.

I thank and stand in solidarity with the Counter Olympics Network for their excellent work at documenting the increasing militarization, corporate profit, and assault on housing, labour, and the environment that the Olympics have become. 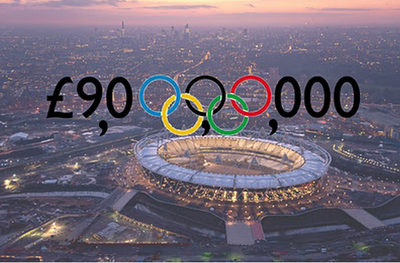 Cartoon Movement has a good graphic version of the issues.

And I hope you will enjoy the results of the counter-Olympics logos and posters collected by an excellent subversive blogger Kevin Blowe, a/k/a Random Blowe.

If all else fails, you can always follow the Lodnon 2102 Oimplycs. (Thanks to reader John F in comments.)

In late 2011, Chris Allison — Scotland Yard’s Assistant Commissioner and the national coordinator of Olympic security — briefed the London Assembly on policing costs for the Olympic and Paralympic Games. He highlighted ‘four key risks to the Games’—terrorism, protest, organised crime, and natural disasters. Singling out protest as a ‘threat’ and then sandwiching it between terrorism and organised crime was revealing. For political activists it was ominous. Security officials should most assuredly do their best to prevent acts of terrorism—that’s their job—but this does not give them carte blanche to conflate activism with terrorism and criminality. Keeping the Games safe from terrorism is one thing—green lighting the squelching of individual freedoms and human rights is another entirely.