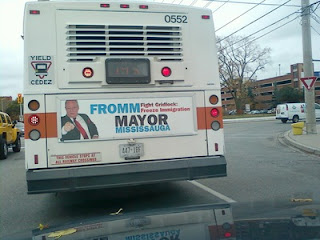 The election is over, but a campaign advertisement that appeared on Mississauga Transit buses – and was still running as late as last week – is firing up residents.

My aim in all of this is to question why the City is outsourcing to a private corporation (CBS Outdoor) to decide what is and isn't to be posted on public space, especially when that corporation has an economic incentive NOT to refuse ads. It seems the Human Rights Code has been privatised in Mississauga.