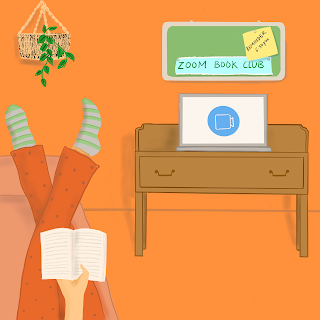 Through my union, I've started a labour book club. This is something I've wanted to do for years, and now it's gotten off the ground. I'm very pleased!

Everything requires persistence, even quitting

I first thought of doing this pre-covid, and imagined that I might gather members of my union in my own area. Not members of my bargaining unit, who are all librarians -- and I'm the only member of the unit in my region -- but BCGEU members in any field.

I asked my bargaining unit chair how I might go about this, and she recommended suggesting to a committee that plans events for all the different locals representing workers in different industries.

Then came covid, and suddenly we were all seeing other all the time on Zoom and Teams. I realized this made the labour book club idea much more attractive and much easier: offer it to everyone, and host it on Zoom.

The next time I asked about it, I learned that I would need to be on this committee. (I'll call it ccc.) And in order to be on ccc, I needed to be on my local executive. So I was elected Member At Large for the local, and became the local's representative on ccc.

Then, when I attended my first ccc meeting, I somehow let myself get elected chair! This was a big mistake. Not only was chairing ccc way more work than I wanted, but now I wouldn't have time for the book club -- the reason I did all this in the first place!

But will anyone attend?

When I brought this idea to ccc, there was a very enthusiastic response. But still, you never know if an idea will actually work. A notice went out to all BCGEU members in our official area, which is all of Vancouver Island north of Victoria. I truly had no idea if anyone would sign up. I was hoping for five or six people.

To my astonishment, 21 people signed up, and 14 people attended the first meeting!

We've had our first meeting -- just informational, to meet and talk about how things will work. Members ranged from avid readers with a lot of book club experience, to one member who would like to start reading and thought this might be a path towards her new goal. A few librarians from my local joined, including two currently on maternity leave, but the majority were from other fields.

I have only two guidelines for this book club:

Our first title is The Cold Millions, by Jess Walter, which I wrote about here.
Other potential titles include:
In Dubious Battle, John Steinbeck
For the Win, Cory Doctorow
In the Skin of a Lion, Michael Ondaatje
The Last Ballad, Wiley Cash
Sometimes a Great Notion, Ken Kesey
Gilded Mountain, Kate Manning
Work Song, Ivan Doig
Storming Heaven, Denise Giardina
Sea Glass, Anita Shreve
Damnation Spring, Ash Davidson
Know any other appropriate titles? Leave them in comments!
Will people enjoy this? Will they continue to attend? We shall see!
Posted by laura k at 1/23/2023 09:08:00 AM

What a great turnout! I wish you continued success!

Older Post Home
Subscribe to: Post Comments (Atom)
As a settler in Port Hardy, I live on the unceded traditional territory of the Kwakwaka’wakw peoples, whose historical relationships with the land continue to this day.