what i'm reading: the cold millions by jess walter 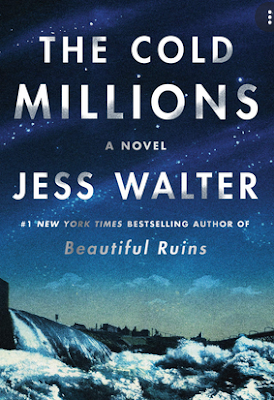 This accepted wisdom, like so many others, is a lie.

Jess Walter's novel The Cold Millions illustrates a slice of the truth that counters that lie. This excellent historical fiction illuminates one of the many ways that the dream of socialism was persecuted, suppressed, and ultimately killed by the people whose power it threatened.

The Cold Millions is set in the northwestern United States -- mostly Spokane, Washington -- in the early 20th Century. It was a time when a tiny portion of the population controlled vast resources, including governments and police forces, and the majority of the population lived in poverty and squalor. (Sound familiar?) There was a fledgling middle class, but it was only steps away from poverty, and so, easily frightened and controlled.

Even though these oligarchs controlled nearly everything, they must have known their position was unsustainable, because they systematically broke or bought anyone who sought to change the prevailing conditions. Labour unions and socialists were constantly in their sights.

The International Workers of the World -- the IWW, often called the Wobblies -- particularly inflamed and enraged the ruling class. The Wobblies were (and are, they still exist) a special breed of labour organizers: they wanted to organize all workers, regardless of industry, regardless of the type or level of their skills. They were also well ahead of their time in standing up for all workers, including Black people, all immigrants, and all women.

The IWW and Elizabeth Gurley Flynn, one of the fiercest and most progressive labour leaders in history, figure prominently in The Cold Millions, intermingled with labourers, drifters, burlesque performers, hired thugs, corrupt police officers, yellow journalists, and other colourful characters.

The central characters are a pair of Irish brothers, drifters and sometimes workers, caught up in their own survival and a vague desire for a better life. There are wonderful sketches of many characters' backstories, and intimate stories of love and loss, set against a sweeping backdrop of social unrest.

Jess Walter's history is well researched, and his fiction is lively and engaging. He weaves different and competing philosophies into the characters, and although he's clearly sympathetic to the workers, the book left me wondering where his own politics shake out.

Walter also paints a portrait of some American cities in their infancy, especially a Spokane and Seattle that no one would recognize today. These were towns with barely one foot out of the Wild West and Gold Rush days, mired in a wildly corrupt and chaotic brand of feudalism. I found this aspect of the history especially fascinating.

The Cold Millions is a thought-provoking book, and a solid, page-turning read.

I am drawn to anything about the IWW and Elizabeth Gurley Flynn. Reading about them ignites my most deeply held beliefs, and makes me feel like I was born in the wrong time. I imagine I would have been a better labour leader in the days when workers downed tools and walked out of factories. People such as Flynn and Clara Lemlich and the New England "mill girls" are my spiritual godmothers.

In an afterword, the author sorts fact from fiction, and recommends further reading. I was so pleased to have read a few of the books on his list, most notably Big Trouble by J. Anthony Lukas, published in 1998, one of my all-time favourite books. At one point in The Cold Millions, there is a reference to the former governor of Idaho being dynamited by radical mineworkers (the survivors of a massacre he ordered). I immediately thought, Big Trouble! That's the event from Big Trouble!

I'm reading The Conspiracy Of Silence by Chris Lamb at the moment.
It touches on The Wobblies ( who I'd not heard of ).
Another book added to the list.
Thanks.

Thank YOU for reminding me of that title! I've wanted to read it, but if the IWW figures in, now I will for sure.

This morning on the treadmill I started A People's History of Baseball. Which means I'm now reading 3 nonfiction books at the same time.

The Conspiracy of Silence is a great book. I started a review, it fizzled, and then I posted my notes last April.

Allan ,
Some time ago I went through your book reviews on JoS , so that's where I know it from.
I'm about halfway through at the moment.
The People's History is also on the list ( along with about 50 others ).

Way to make a writer happy!

I hereby pronounce Wally Reader of the Year.

Oh, and make a librarian happy too. :)

Laura ,
Thank you.
Although I have to be careful how I tell anyone as here on the small island Wally means idiot.
Or a pickled gherkin.

The small island, you're in NZ?

I want to go there.

For some reason I feel better that you're not in NZ. :)

Sounds really interesting. I will take a look.

I met an actual Wobbly once, summer of '63. He was an old man washing dishes at the Poland Spring House in Poland, Maine, where I was a busboy for the summer. He presented as a terminal alcoholic, and he introduced himself to me in the kitchen when I was unloading a tray of dirty dishes at his work station.

--Industrial Workers of the World.
--That was me. I was a Wobbly.

I wish I'd had my wits about me and was prepping an oral history of American labor, ready to put some faces to my Upton Sinclair, Howard Fast, John Steinbeck reading, but instead I stood there kinda gobsmacked, and then he was gone--fired, drunk, dead, just gone--a day or two later.