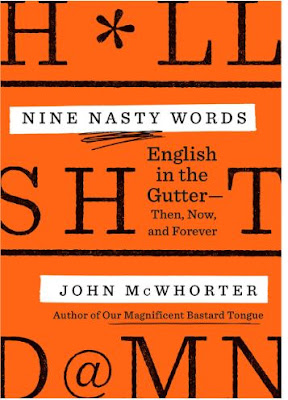 If you enjoy language, and history, and humour, you will probably enjoy Nine Nasty Words: English in the Gutter -- Then, Now, and Forever by John McWhorter. A slim book written in a breezy style, Nine Nasty Words is an absolute delight.
McWhorter takes the reader through a history of English words that have been considered profane in different eras, breaks down their many uses and meanings, and in the process, guides the reader on a whirlwind tour of the incredibly versatile, ever-changing, gloriously inconsistent English language.
McWhorter shows how the types of words that are taboo -- not the words themselves, but what they refer to -- changes over time.
In the earliest years of English, "dirty" words referred to religion, thus the multitude of polite substitutions for damn and hell. So people could be named Simon Fuckbutter and George Fuckbythenavel (seriously, those were people's actual names) but neither Simon nor George would have dared to say goddamn in public.
During and after the Victorian era, unsurprisingly, taboo words were those that refer to sex and genitalia. So folks began to loosen up about hell and damn, but started to use expressions like "the male member" and "unmentionables".
In our present time, the once truly taboo fuck is used casually in dozens of ways. In our current world, the only truly taboo words are slurs that refer to groups of people: witness the phenomenon known as the N-word. (I was disappointed that McWhorter missed "NP", a memorable and hilarious character in Colson Whitehead's Sag Harbor.)
Nine Nasty Words also debunks various popular claims about word origins, which further serves to illustrate how language is always changing. (See my earlier review of McWhorter's Words on the Move.)
One thing that makes this book so entertaining and enjoyable is the author's wide-ranging references. Wide-ranging is a understatement: more like universe-ranging. Shakespeare, Chaucer, and Dante are joined by Broadway musicals, Looney Tunes cartoons, movies from every era of filmmaking (including silent film), sitcoms from "I Love Lucy" to "The Jeffersons" to "Seinfeld", Dr. Seuss, blues lyrics, and more. Plenty more! The author references Russian, Mandarin, Igbo, German, French, Hebrew, all forms of English, and likely several languages I'm forgetting. In another episode of Laura's Worlds Collide, there is a reference to the Melville Herskovitz, an anthropologist I first heard of when reading Gods of the Upper Air, only weeks earlier.
McWhorter's love and appreciation of language in all its messy glory is warm, generous, egalitarian, democratic, and for me, utterly infectious.
Posted by laura k at 12/25/2022 10:07:00 AM