what i'm reading: gods of the upper air, outstanding nonfiction by charles king 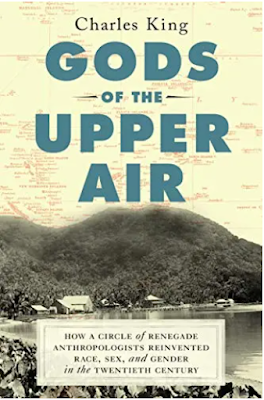 Gods of the Upper Air: How a Circle of Renegade Anthropologists Reinvented Race, Sex, and Gender in the Twentieth Century by Charles King is a compelling, fascinating, impeccably researched, and thoroughly readable work of narrative nonfiction.
It is one of the very best nonfiction books I've read. I borrowed it from the library, but ended up buying it for my bookshelf, and my copy is bristling with sticky notes marking passages I found especially illuminating.
Despite all this, I've been finding writing about Gods of the Upper Air extremely challenging.
Rather than continuing to think myself in circles, I'm taking an easier route: sharing snips from some published reviews (with repetitive facts snipped out), plus a brief note about why I picked up the book in the first place.
Snips from reviews
This is from the publisher, but I find it an accurate assessment.

A dazzling group portrait of Franz Boas, the founder of cultural anthropology, and his circle of women scientists, who upended American notions of race, gender, and sexuality in the 1920s and 1930s--a sweeping chronicle of how our society began to question the basic ways we understand other cultures and ourselves.
At the end of the 19th century, everyone knew that people were defined by their race and sex and were fated by birth and biology to be more or less intelligent, able, nurturing, or warlike. But one rogue researcher looked at the data and decided everyone was wrong. Franz Boas was the very image of a mad scientist: a wild-haired immigrant with a thick German accent. By the 1920s he was also the foundational thinker and public face of a new school of thought at Columbia University called cultural anthropology. He proposed that cultures did not exist on a continuum from primitive to advanced. Instead, every society solves the same basic problems--from childrearing to how to live well--with its own set of rules, beliefs, and taboos.
Boas' students were some of the century's intellectual stars: Margaret Mead, the outspoken field researcher whose Coming of Age in Samoa is one of the most widely read works of social science of all time; Ruth Benedict, the great love of Mead's life, whose research shaped post-Second World War Japan; Ella Deloria, the Dakota Sioux activist who preserved the traditions of Native Americans of the Great Plains; and Zora Neale Hurston, whose studies under Boas fed directly into her now-classic novel, Their Eyes Were Watching God. Together, they mapped vanishing civilizations from the Arctic to the South Pacific and overturned the relationship between biology and behavior. Their work reshaped how we think of women and men, normalcy and deviance, and re-created our place in a world of many cultures and value systems.
Gods of the Upper Air is a page-turning narrative of radical ideas and adventurous lives, a history rich in scandal, romance, and rivalry, and a genesis story of the fluid conceptions of identity that define our present moment.

How a Group of Heretical Thinkers Chipped Away at the Idea of ‘Us’ and ‘Them’
By Jennifer Szalai
During the 1930s, the New York-based anthropologist Franz Boas grew increasingly worried about events in his native Germany. He was in his 70s, and close to retiring from Columbia University, where he taught his students to reject the junk science underpinning the country’s restrictive immigration laws, colonial expansion and Jim Crow. Born into a Jewish burgher family, Boas was horrified to see how the Nazis took inspiration from Americans’ pathbreaking work in eugenics and state-sanctioned bigotry. He started to put the word “race” in scare quotes, calling it a “dangerous fiction.”
Boas is at the center of Charles King’s “Gods of the Upper Air,” a group portrait of the anthropologist and his circle, who collectively attempted to chip away at entrenched notions of “us” and “them.” “This book is about women and men who found themselves on the front lines of the greatest moral battle of our time,” King writes, “the struggle to prove that — despite differences of skin color, gender, ability or custom — humanity is one undivided thing.”
A century ago, the prospect of a common humanity seemed radical to an American public that had been schooled in the inherent superiority of Western civilization. Boas and his disciples argued for pluralism and tolerance at a time when cross-cultural empathy was deemed not just threatening but almost unfathomable.
. . . His ideas were particularly appealing to women who chafed at the patriarchal order. Men were constantly spouting specious and self-serving theories of what was natural; here was a man suggesting that those things might not be so natural after all.
. . . The then-dominant school of anthropology propped up a narrative tracing “the stages of human culture,” from “savagery” through to “barbarism” and finally to “civilization.” Mainstream scholars insisted that white supremacy was justified by head measurements and heel length.
. . . This looks to be the perfect moment for King’s resolutely humane book, even if the United States of the early 20th century isn’t quite the perfect mirror. Boas and his circle confronted a bigotry that was scientifically endorsed at the time, and they dismantled it by showing it wasn’t scientific at all; today’s nativists and racists generally don’t even pretend to a scientific respectability, resorting instead to a warped version of cultural relativism for fuel in their culture war.

In this deeply engaging group biography, King . . . recounts the lives and work of a handful of American scholars and intellectuals who studied other cultures in the 1920s and ’30s, fighting the “great moral evils: scientific racism, the subjugation of women, genocidal fascism, the treatment of gay people as willfully deranged.”  . . . .

King offers captivating, exquisitely detailed portraits of these remarkable individuals—the first cultural relativists—who helped demonstrate that humanity is “one undivided thing,” that race is “a social reality, not a biological one,” and that things had to be “proven” before they could shape law, government, and public policy.

. . . King’s smoothly readable story of the stubborn, impatient Boas and his acolytes emphasizes how their pioneering exploration of disparate cultures contradicts the notion that “our ways are the only commonsensical, moral ones.” Rich in ideas, the book also abounds in absorbing accounts of friendships, animosities, and rivalries among these early anthropologists.
This superb narrative of debunking scientists provides timely reading for our “great-again” era.

Why I originally picked up this book

On a visit to the U'mista Cultural Centre in Alert Bay (something we do whenever we have out-of-town guests), we saw an exhibit about the work done by Boas, with his local ethnographer, George Hunt. Boas and Hunt studied the cultures of the coastal peoples on whose traditional territories I live and work.

George Hunt's descendants form a huge clan, with many famous artists and other notables among them, including the Cranmers, whose life works keep their culture alive in so many ways.

Boas and Hunt knew these Nations as the Kwatiul (pronounced kwa-gi-youth). Port Hardy is built on the traditional territory of the Kwakiutl. All the Nations who are originally from this area are referred to as  Kwakwaka'wakw (pronounced kwak-wok-yuh-wak), which means Kwak'wala-speaking people.

When I saw George Hunt and the Kwakiutl mentioned in a review, I immediately put the book on hold. I'm so glad I did!

A note about a word

I have known for a very long time that racial theory is pseudoscience, that there is no biological basis of race, that it is a purely social construct. I make it a point to never use the word race when describing anyone, and to never refer to someone's race. I have done this for decades.

Instead I use the words color, or racialized, or ethnic background, or heritage, and so on, depending on what is appropriate.

I hope more people will join me to move the needle that little bit.

Also I hope people will read this book.

Definitely sounds worth reading---thanks. I will look for it. I wonder, however, how much influence their work had or has had, given where we are almost 100 years later.

The word and concept of race is very troubling. I find it especially offensive when I am researching and finding so many governmental records---birth, death, marriage, census records, military, and so on---that categorize people by "race." Why was that necessary? (A rhetorical question...) Why are we STILL doing that? Especially in this era where we recognize that all of us have backgrounds that are more and more mixed and when we know that there is no such thing as black or white. If DNA testing hasn't proven that, I don't know what will.

The influence of their work is monumental. The fact that some people are still bigots, or that the US is obsessed with race, doesn't change that. The starting point, the supposed science and attitudes of their times, are long behind us.

Race meant a lot more than skin colour in those days. And their work was more about our attitudes towards other cultures and expressions of humanity.