what i'm reading: krakatoa: the day the world exploded: august 27, 1883 by simon winchester 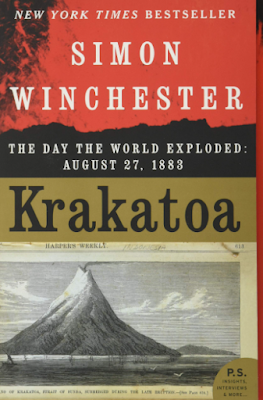 The 1883 volcanic eruption known as Krakatoa was the largest, loudest, and most destructive natural event in human history. The explosions (there were many) were heard almost 3,000 miles away. The eruption produced shock waves that travelled around Earth seven times.

Krakatoa: The Day the World Exploded: August 27, 1883 has been on my Books Universe List* since it was published in 2003. I found a used copy at Powell's, when we visited Portland in 2021.

Simon Winchester, a master of narrative nonfiction, unpacks the entire event. What are these distant islands where this astonishing event took place? How were they formed? Who were the original inhabitants, what empires colonized them, and what were the colonies like in the 1880s? What kind of eruption was Krakatoa? Why was it so immense? What was the aftermath of the explosion? How and where did scientists study it? And so on.

Communications technology at the time was both fast enough and widespread enough that people around the globe heard about Krakatoa while the event was still playing out. Winchester sees the eruption as the first "global" event in history -- the first time that people living everywhere on Earth experienced an event together, and could reflect on themselves as connected to all of humanity. I don't know if the theory holds up -- I wonder if other historians could refute it -- but Winchester paints an intriguing picture.

Some of the science in this book was a bit high-level for me, and I can't say I needed as much detail on plate tectonics and the colonization of Indonesia. But if parts were too detailed for my tastes, Krakatoa more than compensated with riveting survivor accounts, and fascinating shards of evidence attesting to the power and immensity of this event. It's difficult to comprehend a force of this magnitude, but Winchester's vivid, accessible writing gets you as close as science and imagination will allow.

Footnote: to an entire generation that associates the word Krakatoa with a booming voice intoning, "Krakatoa. East of Java": the movie was not only ludicrous, the title was incorrect. Krakatoa was west of Java. The Krakatoa eruption would make a great short documentary, the kind PBS produces for the American Experience series, but this shlocky disaster movie is a must to avoid.

Almost no one died from the explosion itself, but tsunamis and ash killed many. Krakatoa itself was uninhabited. Many people died in coastal towns on Java and Sumatra.

The Dutch counted 46,000-ish deaths. But would they have bothered to track all the deaths in tiny villages outside of their jurisdiction? Probably not.