what i'm reading: four fish: the future of the last wild food 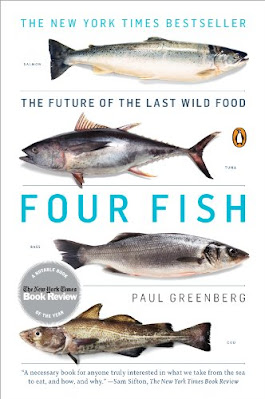 After reading a review of Paul Greenberg's Four Fish: The Future of the Last Wild Food when it was published in 2010, I added the title to The List. When I read it recently, more than 10 years later, the subject matter had become so much more relevant to me, in a way I could not have imagined in 2010.
In Four Fish, Greenberg unpacks the histories of the salmon, bass, cod, and tuna -- the physical and biological histories of those animals, and the cultural, social, economic, and political histories of human's interactions with them.
Each fish's story is told through a human element that brings it to life, and through Greenberg's personal connection to fish and fishing, making the stories accessible and engaging.
And each story is complex and circuitous. Greenberg has a deft touch for imparting the salient bits, (mostly) without getting too bogged down in detail.
I live in salmon country
In the chapter on salmon, Greenberg travels to a remote area of Alaska, where an Indigenous nation is involved in the wild-salmon trade, attempting both sustainability and profitability.
The story could have taken place in my own community. Living on Canada's far west coast, the salmon and the many ways people's lives are linked to it are ever-present.
Indigenous fishers; non-Indigenous fishers, both commercial and sport; the aquaculture (fish-farm) industry; government regulatory bodies (almost universally hated); conservationists; the tourism and hospitality industry; the food industry; casual environmentalists -- all have a stake in the future of this iconic fish, and each has a different perspective. And other than rapacious Food Inc companies whose practices are completely unsustainable, none of them is wrong. It's complicated, and there are no easy answers.
Bluefin is the new whale
Greenberg argues passionately that the bluefin tuna should be a protected species, the way whales and dolphins are -- animals no longer thought of as legitimate targets for either hunting or food. The bluefin -- which is but a distant relative of the tuna many of us (including me) eat -- is almost extinct.

The bluefin conservation advocates, often former tuna fishermen who have been able to pull themselves away from the lure of tuna's silver-ingot bodies and marbled-sirloin flesh, have tried all manner of spells to get those who eat tuna or those officials who legislate over them to somehow sit up and take similar notice -- to abstain from eating them or to pass enforceable regulation for the sake of their preciousness. It is this often-futile battle that is the most telling part of the tuna fishery today. It is the battle with ourselves. A battle between the altruism toward other species that we know we can muster and the primitive greed that lies beneath our relationship with the creatures of the sea.

Greenberg reviews how hunting whales -- how humans' very concept of the whale -- has changed over time, culminating in the end of whaling.

It was the broadest and most far-reaching act of kindness humanity has ever bestowed on another group of species. Though contested and embattled and fraught with disagreements that result in violations, this kindness has persisted. The whaling moratorium remains in effect to this day.

Shifting baselines
Four Fish gave me a name for a concept I have thought about many times: shifting baselines. Greenberg credits marine biologist Daniel Pauly with the term, and says he was struck by

both the profound significance as well as its relative invisibility in the contemporary news cycle.
The idea of shifting baseline is this: Every generation has its own, specific expectations of what "normal" is for nature, a baseline. One generation has one baseline for abundance while the next has a reduced version and the next reduced even more, and so on and so on until expectations of abundance are pathetically low.
Before Daniel Pauly expressed this generational memory loss as a scientific thesis, the fantastical catches of older fishermen could be written off as time-warped nostalgia. But Pauly has tabulated the historical catch data and shown that the good old days were in fact often much better. This is not nostalgia on the part of the old or lack of empathy on the part of the young. It is almost a willful forgetting -- the means by which our species, generation by generation, finds reasonableness amid the irrational destruction of the greatest natural food system on earth.

I can think of a dozen other applications of shifting baselines, from the price of gas to the health of public services to originality in writing and music. Applied to the wild, it is very, very sad.
Q: Which fish should you eat? A: It hardly matters.
Greenberg notes that the issues of the future of fish cannot be managed -- or even significantly impacted -- on the consumer level. I share this perspective on most environmental issues, and I appreciated the validation.
If you eat fish and care about the planet, you are probably familiar with the Seafood Choices Alliance ratings of fish: fish designated environmentally safe to eat, fish that are on the brink of danger and should be eaten only rarely, and fish you should not eat at all. Greenberg reviews the positive impact this has made and concludes:

For in the end, this somewhat passive response to the global crisis in fisheries robs the conservation movement of the will to stage more radical, directed, and passionate action. Daniel Pauly, the author of the shifting-baselines theory and frequent critic of the limited views of the sustainable seafood movement, said as much in a recent paper. "The current faith in the magic of free-market mechanisms must be questioned," Pauly wrote. "Consumers should not be misled that a system of management or conservation based on purchasing power alone will adequately address the present dilemma facing fisheries globally."

Greenbery notes that when he would say he was writing a book about the future of fish, people everywhere would inevitably ask, "Which fish should I eat?"
His conclusion: it doesn't much matter. Action must be taken far upstream, and on a much grander scale.
Practical suggestions and solutions
Greenberg closes the book with a set of principles that could steer humans away from the total destruction of the world's fish, while allowing us to harvest and consume fish sustainably. He writes:

For too long it has been entrepreneurs who have decided which species to domesticate and which to leave wild. Their decisions have been based on market principles and profit, and they have historically not consulted with the managers and biologists who study wild-fish dynamics. This is senseless. If we continue along this pathway, we will only destroy one food system and replace it with another, inferior one, just as we have already done in most of the world's freshwater lakes and rivers. We therefore need a set of principles that guide us forward with domestication, one that is inclusive of impacts on wild oceans.

He then sets out five principles that would guide aquaculture into a new era. Much of it is already taking place, in tiny enterprises scattered around the globe. Will this trend reach a point of global sustainability? Is it even enough to be considered a trend?
The giant web that holds us all
Similar to another book I recently read and reviewed, Animal, Vegetable, Junk by Mark Bittman, Four Fish speaks to the interconnectedness of all living organisms on our planet. Both books reveal the utter foolishness of humans' attempts to interfere with that connectedness, and of the human belief that only more interference, often in the form of technology, can solve the problems that humans have created.
Like Animal, Vegetable, Junk, Four Fish reveals the breadth and depth of how humans have poisoned the Earth, or as Greenberg writes, "the loss of abundance and the greedy privatization, monopolization, and industrialization of fishing that caused it."
Posted by laura k at 7/19/2022 10:34:00 AM