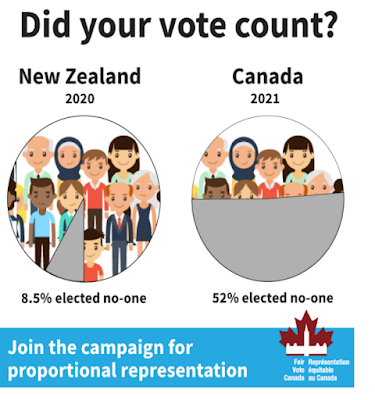 While Canada's electoral system isn't as insanely nondemocratic as the US's winner-take-all (or "first-past-the-post")  by state, with the antiquated and antidemocratic electoral college intervening, it is still FPTP by riding.

For US readers, ridings are roughly the equivalent of congressional districts. So while a 51% vote doesn't rake in all of Ontario, Saskatchewan, or Quebec, it does win a seat in any given riding. And the other 49% of you can all go to hell.

A recent disastrous election in Ontario underscored this further. 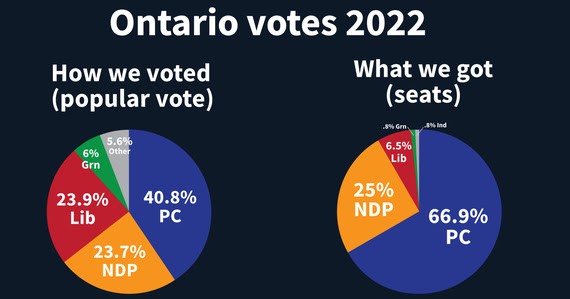 With slightly less than 41% of the vote, Doug Ford and the Progressive Conservatives were able to declare a "majority" government, meaning they have carte blanche to do whatever the hell they want.

And in this case, what they want is ever more privatization -- of Ontario's healthcare system, education, transit, and any public service that can possibly be privatized.

And that means higher fees for every taxpayer, lower-quality service, less oversight in how finances are managed, and a great increase in profits for a well-placed few. Those few will have connections to Conservative governments and to the Ford family personally. In other words, a transfer of wealth from the public to already-wealthy private shareholders.

It also means drastic cutbacks in services and cancellations of many planned programs -- in a province that where public services are already tissue-thin.

This is from an analysis of the 2022 Ontario election from Fair Vote Canada (in part, emphasis added):

-- Thresholds of 3-5% are common in countries with proportional systems and any PR system for Canada wouldn't deliver perfectly proportional results. For example, see here how smaller parties would have fared in the recent federal election.

-- In an Ontario PR system with a 3% threshold, the results would have been:

-- Voter turnout fell to 43.54%. That means the current "majority" government is supported by 17.78% of eligible voters. In a winner-take-all electoral system, many people feel they must vote for the lesser evil, or are discouraged from voting at all.

In May of this year, Members of Parliament from the Green and New Democrat parties called for a Citizens' Assembly on proportional representation. I was so pleased and proud that my own MP, Rachel Blaney, is one of those. Rachel said, in part:

When we talk about things like proportional representation, we really are talking about making sure that every vote counts, that the voices of the collective are reflective in our House of Commons.

As a person who, as I said earlier, really represents rural and remote communities, we wanted to make sure that there were opportunities for those voices to be heard and that the process of a proportional system would not lose those voices. They want to see that the local representation and that those voices are heard in the House of Commons. They want it to be fair.

There is room to have those discussions, but sadly, the Liberals ignored that opportunity. I really feel, and I have heard this after every election, that there is a sense of cynicism that we are never going to get to a place where those voices are heard and where we actually create a system that is more proportional.

The member for Elmwood-Transcona did put forward a motion in PROC to discuss the important idea of having a citizens' assembly on electoral reform in the last Parliament. It passed, but unfortunately, because of the election called, a completely uncalled for election in my opinion, the study never happened. We now have to go back to the writing board.

What is so important about having a citizens' assembly on electoral reform is we need to see citizens engaged. We need to hear those voices and maybe we need to take it out of the political realm and give voices to people across this country.

What I think is so important, and what I have heard from constituents across the board, is they want to explore this. They want to make sure their vote counts. They want to be able to vote as they feel, even if that vote will not get them a seat in Parliament. They do not want to feel like that vote is something they throw away.

Constituents also want to make sure that areas are represented fairly. For my riding, like I said earlier, they do not want to feel like the cities of our country are the ones making the decisions. The realities for rural and remote communities can be very different than those of larger cities. That is not to dishonour any one of them, but it is to make sure that those voices are heard.

Rachel also supports lowering the voting age to 16, which we urgently need.

I was surprised to learn that the Toronto Star published an editorial calling for electoral reform -- surprised, that is, until I realized that this time around, Ontario's Liberal Party was negatively affected by FPTP. During the 2007 Ontario referendum on electoral reform -- when the Liberal Party was in power -- the Star, always a Liberal mouthpiece, opposed reform, citing "the way we've always done things," don't you know.

Although moving to a proportional representation system often seems like an impossible dream, it's a dream worth fighting for -- a dream we must never give up.