what i'm reading: animal, vegetable, junk: a history of food, from sustainable to suicidal, by mark bittman 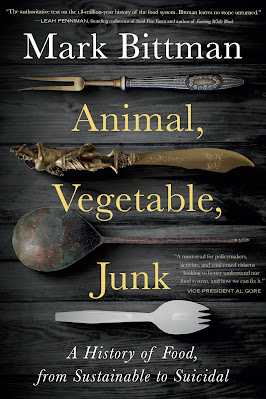 Mark Bittman's Animal, Vegetable, Junk: A History of Food, from Sustainable to Suicidal is fascinating, readable, and wide-ranging nonfiction. With clear and simple language, Bittman unpacks the many threads that have determined, throughout history, how we humans feed ourselves. As an alternate subtitle, I might suggest "How Imperialism and Capitalism Ruined the Planet and Everything On It". Or perhaps, "Finally, A Book With Hope".
This is a great book for anyone curious about the nexus of economic and political systems, oppression, and food. Even if you don't think you're interested in the history of food, if you enjoy history, this is a terrific book.
Bittman looks at history through a consistently anti-capitalist, anti-imperialist, and social justice lens. I especially appreciate Bittman's consistent recognition that the problems caused by the industrial food system cannot be solved on an individual, consumer level. To use an example from our current cultural moment, first-world childhood obesity will not corrected by admonishing parents to get their kids more exercise. Individual choices impact individual health; that much is obvious. But people can only choose what is available to them and what they can afford. Individual change will never be, can never be, enough.
Throughout, Bittman gives special focus to how food systems impact Indigenous people, people of colour, and impoverished and low-income people -- and workers.

Since the first enslaved people grew and processed sugar on Madeira, Western food has relied on brutal labor practices. It still does. From industrial agriculture's perspective, labor is a necessary evil -- a nuisance.
Small and biodiverse farms are still labor-intensive. But large farms minimize labor in every way possible, relying instead on chemicals, seeds, and machines.
Yet food always comes back to labor. Without workers, none of us would eat. And just about every hand that helps bring food to our tables belongs to a person who may well be worried about putting food on their own. Eight of the ten worst-paying jobs in the United States involve food. Of the twenty million food system jobs that constitute the largest private labor force in our economy, almost all earn wages that hover around the poverty line. At least a third of farmwokers earn less than the official poverty wage, which is twenty thousand dollars per year per family. That's just about enough to pay for a minimally nutritious diet for a family of four, leaving approximately zero for every other expense other than an unrealistically low rent.
Many of these jobs are repetitive, demeaning, and dangerous. Workers are denied basic rights like regular bathroom breaks; a reliable schedule; freedom from abuse, harassment, and wage theft; and the right to organize and bargain collectively.
That's how the system was designed to work.

And from much later in the book:

Addressing mistreated workers in our food system will require a cascade of changes to the status quo, which makes it a good place to start. And awareness of food-chain labor has accelerated in recent years. It's no coincidence that the "Fight for $15" -- the movement to institute a minimum hourly wage of fifteen dollars in place of the current federal minimum of $7.25 -- began at KFC, McDonald's, and Burger King.

Animal, Vegetable, Junk introduced me to a new idea: industrial farming is best thought of as an extraction industry, like mining, logging, and commercial fishing. Industrial farming is a health issue, a labour issue, an animal-welfare issue, and of course a climate change issue. The situation is dire, almost beyond comprehension.
The book's penultimate chapter is about the industrial farming of animals. This was very difficult to read, touching on my worst cognitive dissonance. Any thinking person would be disturbed by it. One can choose to be vegan, but that, in itself, will not end or even reduce industrial animal torture. I have taken steps to opt out of factory farming, but there are areas I have not addressed, especially dairy and eggs. Mostly I force myself to look, and feel sick.
Thankfully, in the final chapter, Bittman offers hope. And in this case -- unlike other books I've read where a paragraph of obligatory platitudes are tacked on at the end -- this hope is real. In "The Way Forward," Bittman profiles a diversity of alternative food and health systems and programs that exist and are working. Some are spearheaded by governments, others by self-organized cooperatives -- from Brazil, Chile, Mexico, India, France, Denmark, and some in the United States.
These positive examples were amazing, and well worth the read. But to truly understand why the alternatives are needed, and what they represent, I hope you will read the full book.
Bittman's writing is simple and clear, and (mostly) refreshingly jargon-free. (The book is heavy on acronyms, but that may be unavoidable.) I first became aware of Bittman through "The Minimalist," his old column in the New York Times. In many ways, he taught me how to cook. Creating delicious, healthy food with a few simple ingredients is an art form. But it turns out Bittman knows a hell of a lot more than that.
See also
You may enjoy reading this excellent review of Animal, Vegetable, Junk in the New York Times. The reviewer, Ted Genoways, wrote a book called The Chain: Farm, Factory, and the Fate of Our Food. It has been on my list since its publication in 2014, but I haven't had the heart to read it.
I was pleased to see Bittman mention and praise the book Salt Sugar Fat: How the Food Giants Hooked Us by Michael Moss (my review is here) -- an important and under-recognized book. I photocopied the selected reading list Animal, Vegetable, Junk for future reference, and was pleased to see that I've read a handful of the titles.
Obviously Bittman is writing from a United States context. In some ways things are a bit better in Canada. But I hope Canadians who will read this book know that all the same problems plague Canadian society, too. As I always say, "better than the United States" is a very low bar.
Posted by laura k at 5/30/2022 11:52:00 AM