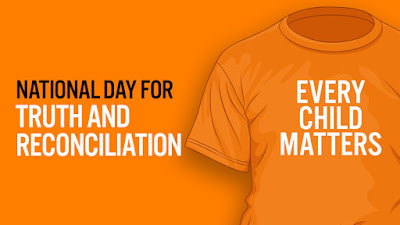 On September 30, many Canadians will have the day off in honour of a new holiday: National Day for Truth and Reconciliation. The holiday was created in response to the continuing revelations of mass graves located beneath the sites of the former concentration camps known as Indian Residential Schools. The remains of more than one thousand people have been found, and thousands more remain undiscovered.
How we choose to honour this day will be up to each of us. On one end of the spectrum there may be mourning and grief, contemplation and resolve. On the other end, an aggrieved, bitter racism. In between those poles there are feelings of helplessness and confusion, platitudes, lip-service and window-dressing, and an excuse for a day off with no meaning at all.

Many Canadians celebrate Remembrance Day with reverence, observing a moment of silence at 11:11, and attending events commemorating Canadians who lost their lives serving in the military. Although (as you may recall) my take on this differs from the official reading, I know that the holiday does have meaning to millions of people. I hope that the National Day for Truth and Reconciliation will take on a similar somber meaning.

This week I had the opportunity to bear witness in a small way: my partner and I attended an exhibit of "The Witness Blanket" in Campbell River, about three hours south of where we live, and the closest population centre to our region. The exhibit is of a reproduction of a major installation by the artist Carey Newman.

Newman spoke with survivors of the Indian Residential Schools, as these concentration camps were called, and visited former sites. He collected physical objects, and incorporated them into a large, carved work. The work lives in the Canadian Museum for Human Rights, in Ottawa. 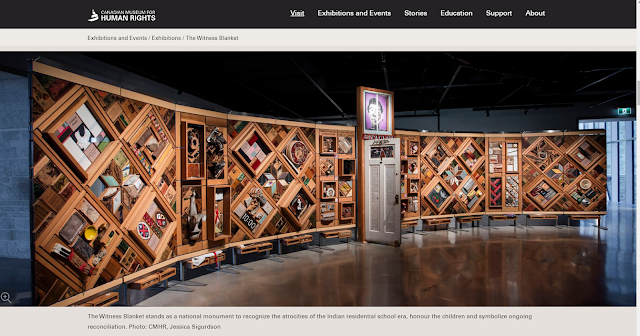 On the museum's website, you can see images and read about eight of the objects that Newman incorporated into the work. I found this one especially sad. Impossibly sad. Sadness too profound to express. 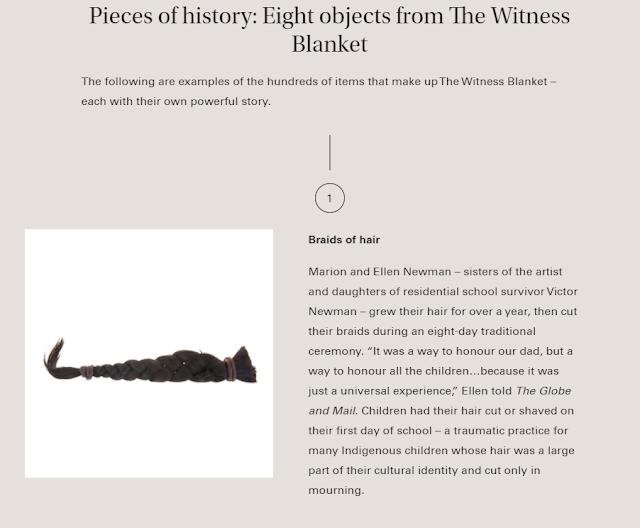 In the image of the Witness Blanket above, you can see a set of horizontal, rectangularly-shaped slots below each panel. Those hold law books.

The Witness Blanket was created in 2015, and was often on tour. It became damaged and in need of restoration. What tours now is a two-dimensional facsimile of the carved work. I hope one day to experience the original carving, although seeing the reproduction was still impressive and deeply moving.

In this article in the local Campbell River newspaper, you can see more photos of the replica Witness Blanket, including some of the opening ceremony. In one photo, you can see a dancer wearing a traditional button blanket.

There is a Witness Blanket website, but it doesn't seem to function correctly, as well as an app through which you can explore the work and its meaning.

Carey Newman has close ties to our area. His bio reads, in part:

Carey Newman, whose traditional name is Hayalthkin'geme, is a multi-disciplinary Indigenous artist, master carver, filmmaker, author and public speaker. Through his father he is Kwakwak'awakw from the Kukwekum, Giiksam, and WaWalaby'ie clans of northern Vancouver Island, and Coast Salish from Cheam of the Sto:lo Nation along the upper Fraser Valley. Through his mother he is a Settler of English, Irish, and Scottish heritage. In his artistic practice he strives to highlight Indigenous, social, and environmental issues as he examines the impacts of colonialism and capitalism, harnessing the power of material truth to unearth memory and trigger the necessary emotion to drive positive change. He is also interested in engaging with community and incorporating innovative methods derived from traditional teachings and Indigenous worldviews into his process.

I hope Canadians are seeking out and joining local commemorations, or those offered by their employers, to imbue their day off with meaning. Tomorrow, I am joining a march led by three of the Indigenous communities in Port Hardy. (Of those three, Port Hardy was settled on the traditional Kwakiutl [pronounced "kwa-gi-uth"], territory. Two others Nations, the Gwa'sala and 'Nakwaxda'xw [pronounced "nak-wa-do"] people, were placed here involuntarily, two separate Nations forced onto one reserve, their villages burned behind them.)

If you have an opportunity to visit the Witness Blanket, even in its current replica form, I think you will be moved and impressed. There are also many books and recordings by survivors, each of their voices bringing us the painful gift of truth.

And of course every Canadian can read the Calls to Action created by the Truth and Reconciliation Commission, and think about what they personally can do to contribute to Reconciliation.

Reconciliation is not an end goal: it is a process. It's not something governments will achieve, although government has a part to play (one that it is currently and spectacularly failing).

Reconciliation is the responsibility of every person in Canada, every organization, every employer, every family. It's something we must contemplate and consider, and hopefully learn to embrace. As I'm learning from the Indigenous people in my own community, we must walk the path of Reconciliation together, with curiosity, humility, and respect. That is the only way forward.

Thank you for sharing and for encouraging us to action.