what i'm reading: the heartbeat of wounded knee: native america from 1890 to the present 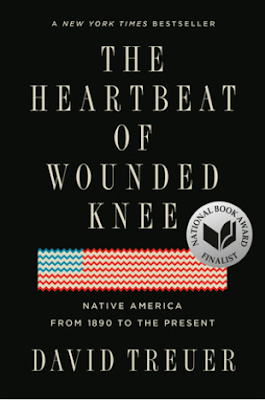 The Heartbeat of Wounded Knee is a fascinating nonfiction. Part hidden history, part contemporary journalism, plus a dash of personal memoir, this ambitious book offers a new perspective on the Indigenous peoples of North America, in both the past and the present.
Historian and journalist David Treuer, who is Ojibwe, has dug deep into a misunderstood past, and surveyed a nuanced present, to create an important narrative that will be new to most readers.
* * * *
The book that is echoed in Treuer's title, Dee Brown's Bury My Heart at Wounded Knee, is likely the most famous work ever written about Native Americans. It's always been on my to-read list, but when I would think about reading it, it felt so heavy. Similar to how I feel about Holocaust literature, I didn't want to engage. Now I'm glad I never read that book, because I've learned that most of it is myth and misconception.
The first part of The Heartbeat of Wounded Knee could be titled "A People's History of Native America" -- a Howard Zinn-style counter-narrative, re-telling the story of contact and westward expansion from the Indigenous point of view, highlighting resistance and resilience -- and there was plenty of both.
Treuer unearths a hidden history of resistance that is stunning and inspiring. The resistance of Indigenous peoples was as relentless as the forces stacked against them. Nations used myriad forms of creative resistance against invasion, removal, and the destruction of their cultures. In the face of monumental, inescapable change, they regrouped and reinvented themselves again and again, over decades and centuries. Some chapters of this story are undeniably horrible and dark, but it's a more nuanced story than the one you likely already know and believe.
Throughout, Treuer pushes back against the more typical narrative of ruin, defeat, and despair. He also engages in some surprising myth-busting and truth-telling about modern and contemporary Native America.
* * * *
We know that, post-contact, the Indigenous peoples of North America were killed by both outright slaughter, by the destruction of their environment (such as the mass buffalo slaughter), and by disease. I knew that Native peoples had no immunity to smallpox, but I had not considered that while westward settlers were spreading infection, a smallpox vaccine was already in use. Some infection was intentional, but even unintentional infection was preventable.
"Guns and germs," however, are only part of the story. Indigenous cultures were also killed by: government edict, legal sleight of hand, forced (and botched) assimilation, forced re-education, the systemic destruction of access to cultural necessities, a ridiculous number of treaties signed then ignored, and even by well-intentioned, paternalistic do-gooders.
One piece that I found particularly galling is how, after a US government push for Nations to become self-sufficient -- to use the dominant channels to regain the self-sufficiency they had lost -- the same government passed laws that made it absolutely impossible for them to do so.
In one example, Menominee tribes practiced sustainable forestry in the deep woods of Wisconsin and Michigan.

Oral history has it that a kind of spiritually based sustainable-yield management system was put into practice shortly after the reservation was established in 1854. According to a tribal leader, Charlie Frechette, the Menominee invoke this practice as part of many of their ceremonial proceedings: "Start with the rising sun and work towards the setting sun, but take only the mature trees, the sick trees, and the trees that have fallen. When you reach the end of the reservation, turn and cut from the setting sun to the rising sun, and the trees will last forever." The proceeds from the first trees they cut and sold went to buy flour. The tribe was in a position to use the resources it had left in order to take care of itself and to remain self-sufficient.

The government, again working in direct contradiction of its own stated ideology (weren't Indians supposed to learn "I" and not "we," and the value of buying and selling?), quickly put a stop to Menominee logging . . . In the government's view, land was to be cleared of trees and then planted. This was the path to civilization. It was also a path to disenfranchisement: the timber barons in Wisconsin, Michigan, and Minnesota wanted to sell the timber themselves and reap the profits.

Again and again, across eras and geography, Nations were prepared to adapt, and were successfully adapting, only to have the rules changed when private interests wanted to clear the way for more profit.
* * * *
Here are some random tidbits that were of particular interest to me.

A settlement that was recompense for previous federal and private mismanagement and unlawful seizure of land and the assets on it was now recast as a reward to be granted to submission or withheld for insubordination. This failure of imagination is more pervasive and insidious than has generally been recognized, and it is shred by Indians and non-Indians alike. Such concessions made to the tribes in recognition of the horrors and tribulations of the nineteenth century, or colonialism more generally, are not pity payments or proto-welfare. Treaty rights and all of the benefits that accrue from them arise from the treaties themselves -- according to the U.S. Constitution, they are the "supreme law of the land" and the tacit recognition of the inherent rights Indians possessed long before the coming of the white man. The Menominee had the right to exist, the right to government, the right to social services not because they had suffered but because some of those rights were inherent long before they were brought to the treaty table -- and because others were received from the Americans in exchange for the right to settle Menominee homelands.
Had those rights been honored, the Menominee could have become the most fabulously successful tribe in the history of world and the U.S. government would still have been obligated -- by international law, by precedent, by its own founding documents, and by the treaties is signed -- to honor the provisions in those agreements.

NAGPRA was, like a lot of legislation, meant to right historical wrongs and to curtail those ongoing. For instance, it initiated an official process for the return of Indian remains and funerary and non-funerary and religious objects held at state and federal institutions and in any museum or collection that received federal funds or grants. It also established procedures for the treatment of Indian remains and objects discovered during construction on state and federal land. Last, it made the trafficking of Indian remains a federal offense (though possession of remains is still legal). Although imperfect, this legislation has had a profound effect on the tribes themselves and on their relationship with the federal government. To date, the remains of more than 57,847 Indian people, 1,479,923 associated funerary objects, 243,198 unassociated funerary objects, and 5,136 sacred objects have been repatriated, in what continues to be a powerful and significant homecoming for tribes across the country. Armed with such legislation, tribes can finally try to make whole, however imperfectly, what has been broken. And coupled with the growth of Indian education and the move to put more and more power in Indian hands, the legislation created a sense that centuries of hostility from the state directed at Indians were at last giving way to some restoration of Indians' ability to control and protect our cultural patrimony.

* * * *
The Heartbeat of Wounded Knee is and does many things, so if a reader finds some parts more engaging than others, that's to be expected. I loved the first part of the book, the Howard Zinn-style myth-busting. Parts of the more modern history, such as some of the American Indian Movement stories, I would have liked less detail, and gave those parts a light read. When the narrative catches up with the present, I once again found it fascinating and riveting. If, like me, you find some parts too detailed, I encourage you to skim and stay with the book. It's well worth your time.
I heartily endorse these pullquotes from published reviews:
"In a marvel of research and storytelling, an Ojibwe writer traces the dawning of a new resistance movement born of deep pride and a reverence for tradition. Treuer's chronicle of rebellion and resilience is a manifesto and rallying cry." — O, The Oprah Magazine
"Part of the magic of this book stems from Treuer's ability to move seamlessly back and forth from the Big Indian Story to the voices of living Indians explaining to us, and to themselves, what it means to be Indian, American, and both at the same time. . . .  open[ing] a window on the contemporary Indian world, in its dazzling variety, and infus[ing] the book with a kind of vividness and punch rarely found in narrative histories. . . . It's hard to imagine there will be a better, more compelling look at Indian country than this one anytime soon." — The Daily Beast
"A gripping medley of academic rigor, reporting and memoir, Treuer's fascinating and unconventional account of Native American history burns with a passionate sense of resiliency." — Washington Post
Posted by laura k at 7/18/2021 12:47:00 PM