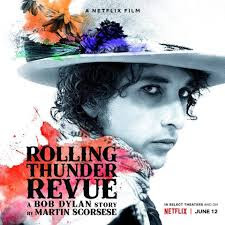 Allan and I have been greatly anticipating "Rolling Thunder Revue: A Bob Dylan Story", the new film by Martin Scorsese released this week on Netflix.

When "The Last Waltz" opened at Radio City Music Hall in 1978, I was a senior in high school. My friends and I skipped school and snuck into the city to see it. About 10 years later, Allan and I saw it together (he for the first time) and it became a touchstone of our relationship.

These days, rearranging work schedules to watch a movie is no longer an option, but we waited until we were both available and could watch this film together.

I loved it. The film is a joy from start to finish. I'm sure I will watch it again and again, and future viewing will reveal more to delight, enlighten, obscure, befuddle, and entertain. Here are some reasons why.

1. Dylan then. His stage persona is warm, forceful, and passionate. The songs he has chosen are socially engaged. His voice has never been better. He seems relaxed, happy, and in the moment. He connects with the audience. He seems to revel in the joy of music-making. What a rare and welcome view of this artist!

2. Dylan now. Talking, smiling, storytelling -- story-making. We have never been over-exposed to Dylan talking about his music. And when we have seen him, he has been argumentative, defensive, contrary, defiant, flippant, or barely suffering the fool who asks the question. The Dylan chatting with us in "Rolling Thunder Revue" is relaxed and friendly. Even in a fake interview, this is a delight.

3. Scarlet Rivera. The legendary violinist is resplendent, her wailing notes transforming the standard (although excellent) rootsy sound of guitars and bass into an emotional wildfire. I have loved Scarlet Rivera's violin and these arrangements since first hearing this music in 1976, and through the years my appreciation has only deepened.

4. Joni Mitchell. We are treated to a glimpse of songwriting in progress (pause and check out her hand-written lyrics!), and a behind-the-scenes rehearsal. This takes place supposedly in Gordon Lightfoot's Toronto flat, and includes Joni showing Dylan the chord changes. I'll take a loop of the whole Joni segment, please.

5. The playful mix of fact and fiction. For his fans, Dylan's life has always been a mix of fact and fiction -- and this echoes the melange of fact, legend, and rumour that all rock stars' lives were to us in the pre-internet era. Martin Scorsese's profound understanding of Bob Dylan, this music, and its place in our culture make him the perfect filmmaker for this material. His choice to break the documentary format is genius, and the results are very amusing and entertaining.

6. The songs. The set list is socially and politically powerful -- some songs overtly so, and others a bit more cryptic.

7. Joan Baez. Baez' voice -- like Rivera's violin -- is a soaring, sailing, wailing counterpoint to Dylan's gruff and forceful singing. I am not a member of the Joan-and-Bob cult, but their voices are perfect together and their chemistry onstage is irresistible.

8. Allen Ginsberg. Allen Ginsberg is like a shining thread that runs through so much that has meaning for me. In this film, we hear his poetry and his observations. We see him meditating. He seems happy. This also affords us a glimpse of Peter Orlovsky. I love Allen Ginsberg. I miss him.

10. Sam Shepard! Rumour has it that Shepard was the inspiration behind Joni Mitchell's song "Coyote" (alluded to above). And they were on part of this tour together. Is it hot in here?

Labels: history, music, we like lists, what i'm watching