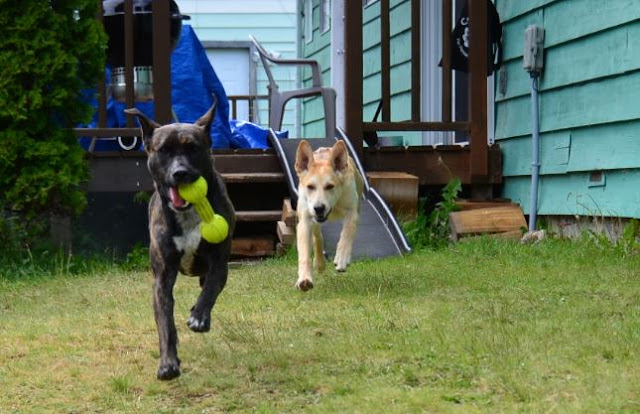 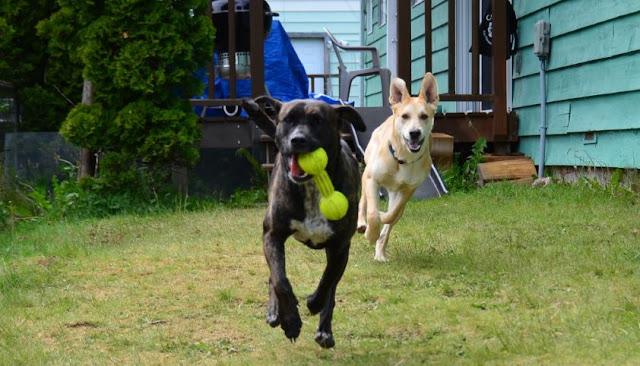 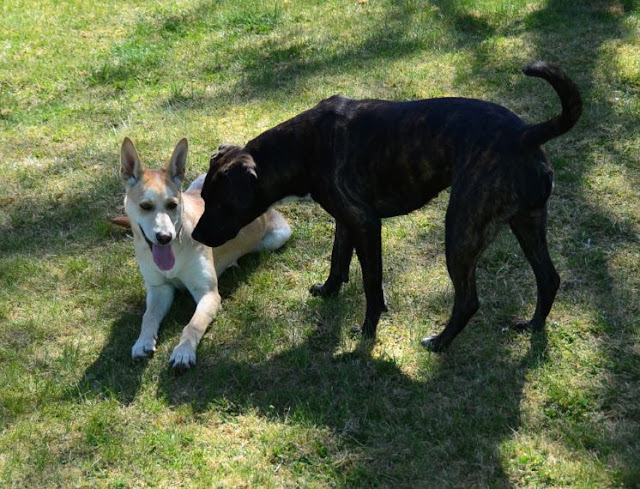 This action photography is brought to you by Allan.

Don't worry, we are not neglecting Diego. I just didn't have any good shots of him, and I wanted to get this post up. 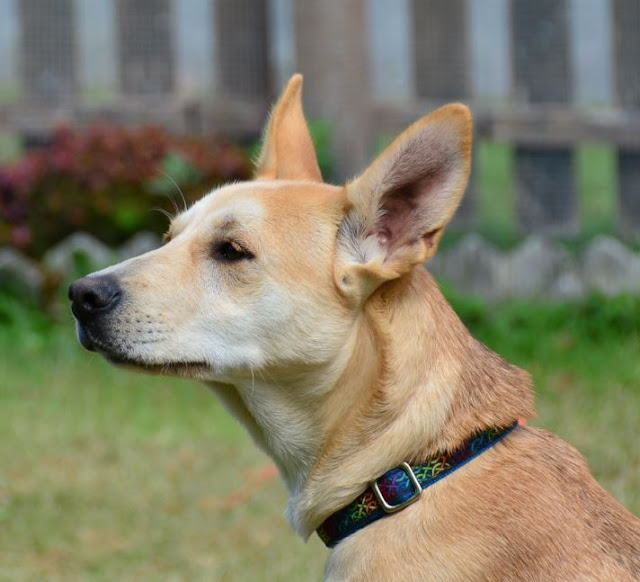 Kai and Cookie are little devils. Kai has gotten out of the yard three times in the last four days. One minute she's in the yard, and then she's in the street. We've got ourselves a jumper. We haven't seen her do it, but it's the only way out. We're working on it.

We've known that new dogs learn from the rest of the pack. But we didn't expect it to work the other way! Cookie is not fully housetrained. Kai saw this and thought, Hey, I didn't know we were allowed to do that in here! Cool! Yup. Multiple gifts from multiple dogs.

Yesterday Cookie was running around with one of my shoes -- holding the very tip of the shoelace in her mouth with the shoe dangling just above the floor. She thought dancing away from Mommy was a great game. That was after Kai helped her steal and eat some donuts Allan had in his office.

Ah well. Time and patience are required. We have both.

For the most part, though, Cookie has settled in and is learning fast. Kai, no longer the baby, is suddenly calm and mature (except when she's not). Diego's staples were removed, he's walking, and sometimes playing with the Littles. Mostly he looks on, bemused.

Cookie worships Diego. I haven't been able to capture it yet, but she does this thing that an omega wolf will do to the alpha wolf. While Diego is standing up, Cookie lowers herself and licks the underside of Diego's snout. (It looks like this.)

This morning when I took Cookie out -- the Littles go first, Diego prefers to wait -- Diego was up and moving around. Cookie was torn between going outside and attending to Diego. I had to put her leash on and practically drag her outside.

We've seen pack behaviour in our dogs before, but I've never seen adoration on this level. Diego reacts as dogs do: he allows Cookie to worship him. If he's resting and doesn't want to be disturbed, he will show his teeth and growl at either of his sisters.
Posted by laura k at 5/22/2019 07:55:00 AM