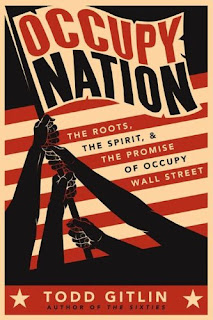 Occupy Nation: The Roots, the Spirit, and the Promise of Occupy Wall Street is a history and ethnography of Occupy Wall Street, and the Occupy movement. Author, sociologist, and longtime leftist activist Todd Gitlin has written an account of how a social movement was born, grew, and died. After reading it, I felt utter despair at our ability to create a more democratic political system, and a more just economic system. I'm pretty sure that's not what Gitlin was going for!

It's easy to forget how present the Occupy movement became -- how quickly it spread, the attention it drew, how it forced a change in the terms of the debate. Hundreds of thousands of people in nearly 1,000 cities around the globe took part in Occupy demonstrations. The expression "the 99%" entered a common vocabulary. Occupy focused public and media attention on income inequality in a way I had not seen in my lifetime. Together with the Fight for 15, Occupy made labour and economic issues truly visible for the first time in many decades.

Gitlin does a good job of situating Occupy within the context of other progressive movements in the US, and to some extent, globally. I was most interested in his analysis of Occupy's inner workings. How did the movement grow? How was it governed? How were ideas put forward, how were actions chosen, who created the strategy, and how was it carried out? That's what I found so depressing. Occupy was strangled by its own ideals.

Occupy organizers wanted to create a participatory (as opposed to representative) democracy; they had a strong commitment to a leaderless structure where all voices were equal. It was meant to be a "prefigurative" movement -- a movement that reflects the world it wants to build.

Occupy's commitment to participatory democracy helped it quickly spread and grow, as people felt included and heard. But movements need goals, agendas, strategies. Movements need mechanisms to build consensus, to break bottlenecks, to ensure participation while still moving forward. And movements need leaders. Leaders arise very naturally in all situations; processes are needed to allow those leaders to lead, while still ensuring constant communication and participation at every level.

The "interminable meetings of fractious and dogmatic Occupiers" (as a Kirkus review puts it) eventually became unsustainable. There was no direction or plan for moving forward. There were too many ideas for forward movement, but no road taken.

None of this means Occupy was useless or accomplished nothing. I've written a lot about that and I don't want to repeat it all here. Occupy was an incredibly positive phenomenon. But it was unsustainable.

It's easy to create change from the top down -- to impose a strong will on others -- at least for a short period of time. But change from the ground up, a true grassroots movement, is infinitely more time-consuming and exponentially more difficult to build. It's also incredibly fragile, especially if the movement insists on being democratic and inclusive.

After reading this book, I felt, and certainly not for the first time, that building a new social system is all but impossible.

Of course, reform is possible. We can force reforms onto the present system, tiny bits of social democracy grafted onto a grossly capitalist system -- social security, public education, minimum labour standards. Everything that comprises the social safety net is such a reform. But reform is always too weak. Reforms leave too many people out, and they prop up a corrupt and unjust system. And as we know, those reforms can be withdrawn, or weakened so badly that they might as well not exist.

Moving from a nominally representative democracy to authoritarianism of any stripe is so easy. The playbook perfected in the 20th century has never gone out of fashion. Lies, propaganda, scapegoating -- create and sustain fear -- suppress the opposition -- repeat repeat repeat. The recipe is so effective, because it asks so little -- follow me blindly -- and apparently is very satisfying to large numbers of people.

Moving from that nominally representative democracy to something truly democratic and responsive to the needs of the people can never be accomplished through reforms. But is reform all we can get?

I know how almost everyone reading this answers that question. And I hate when I answer it the same way. Gitlin's book reinforced that dreaded answer for me. The answer I (try so hard to) refuse to believe.
Posted by laura k at 1/16/2019 08:06:00 AM