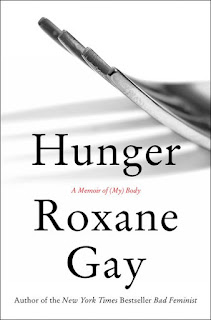 During the Ontario provincial election, after a hack from the Toronto Sun drew attention to an unpopular view that I had expressed some years earlier, I was the object of right-wing attacks by email and on social media.

Many of these wingnuts referenced my weight in various disgusting ways. This shocked me because, although I am overweight, I'm not unusually heavy, not large enough to be remarkable. No matter. Total strangers mocked me for being overweight, using a whole slew of pejoratives and curse-words. I had never experienced that before.

I confess that even though I couldn't possibly care less what trolls think of me, each time this happened, I felt a brief pang of humiliation and embarrassment. I've always been impervious to right-wing bullying; if anything, I wear it with pride. But these taunts hurt, if only for a split-second. I wish this weren't true. I'm embarrassed to admit it.

I thought of this experience as I read Roxane Gay's powerful book, Hunger: A Memoir of (My) Body. I imagined what it might be like to feel that humiliation and embarrassment all the time, multiplied a thousandfold, day in and day out, year after year. To experience this so often and so typically that you come to expect it and imagine it, even when it might not be happening. I tried to imagine the psychic cost.

Gay makes it easy to imagine and to empathize, as she lays bare her thoughts and emotions in a way few memoirists dare. She lays open her heart to the reader. Even more than that. She opens a vein. Few writers allow themselves to be so vulnerable, so emotionally naked. It's impressive, and sometimes painful to read. I felt that Gay is asking us to bear witness. That's not comfortable or easy to do; it's not supposed to be.

Hunger and Gay's unsettling candor is not just about her weight. It's about why she first began to overeat, to build an armor between her and the world. When she was 12 years old, Gay survived an extremely brutal rape -- a gang rape, in fact, organized by someone she loved and trusted. The circumstances surrounding the assault -- who the perpetrator was, and Gay's relationship to him both before and after the attack -- add even more layers of horror.

Overwhelmed by shame and self-blame, Gay never told her parents. For a long time, she never told anyone. Her isolation amplified her feelings of worthlessness, and set her on the path of an extreme eating disorder.

Gay is a committed and informed feminist. Yet she carries an overwhelming hatred of her body, and an almost elemental self-blame and self-hate.

It would be easy to pretend I am just fine with my body as it is. I wish I did not see my body as something for which I should apologize or provide explanation. I'm a feminist and I believe in doing away with the rigid beauty standards that force women to conform to unrealistic ideals. I believe we should have broader definitions of beauty that include diverse body types. I believe it is so important for women to feel comfortable in their bodies, without wanting to change every single thing about their bodies to find that comfort. I (want to) believe my worth as a human being does not reside in my size or appearance. I know, having grown up in a culture that is generally toxic to women and constantly trying to discipline women's bodies, that is important to resist unreasonable standards for how my body or any body should look.

What I know and what I feel are two very different things.

I think most of us can relate to a gap between what we know and what we feel. Much of Hunger resides in that gap.

Gay writes about how her size and her self-loathing impact everything in her life -- travel, dining in restaurants, shopping, public speaking, exercise. And of course, her relationships. In short, she writes about what it's like to be very fat in a fat-phobic world -- and by extension, what it's like to be a woman in a world where the female appearance is relentlessly policed and judged.

Some of the best pieces in Hunger focus on reality television, the weight-loss industry, and the culture of celebrity fat-shaming. I'm no stranger to this material, but Gay's analysis is trenchant and bracing.

Her writing is spare, and it is blunt. Where it shines the brightest -- and paradoxically, where it's most difficult to read -- is her analysis of the aftermath and enduring effects of the rape. Throughout, she connects her private struggles to the larger public sphere.

Hunger: A Memoir of (My) Body is an important book, both deeply personal and staunchly political.