what i'm reading: city on fire 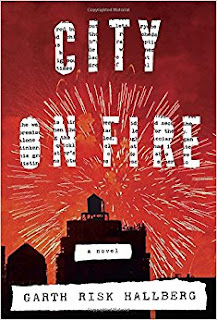 I finished City on Fire, Garth Risk Hallberg's astonishing debut novel, a few days ago, but stories from the book are still playing in mind. I initially didn't want to commit to reading a 900-page tome, but as I savoured the last scene, I was sorry to put it down.

City on Fire brings you to 1976-77 New York City, the summer of The Blackout, when the City famously went dark and infamously gave way to rioting and looting. It's the New York City of graffiti-covered subway cars, of brutal service cuts, unemployment, and street crime. It's also the New York City of the punk rock revolution, the birth of hip-hop, an exploding social scene of sex, drugs, and disco, of early gay liberation, of artistic flourishing. It's the New York City that lured young people who didn't conform to their small town's small-minded standards to stuff their belongings in a duffel bag and buy a one-way ticket on Greyhound. And it is -- as it always has been and always will be -- the New York City of stunning contrasts and great social divides, all thrown together and intersecting all the time.

Hallberg gives you all of it. The reader meets characters from vastly different experiences and social standings, each with their own present and past, each trying to find their way into a future. Each chapter is told from a different character's point of view. Not only does the point of view change with each chapter, but there are different timelines in play, too. As the characters' lives intersect (usually without their knowledge), a shape begins to form, a puzzle. There is a mystery, perhaps a few mysteries, that the reader can't solve until all the pieces fall into place.

Reading City on Fire, I was reminded -- strongly and often -- of the work of Charles Dickens: the sprawling ambition, the multiplicity of points of view, the intersecting lives, the City as almost a character in the book. It's a bold move for a contemporary author to make, and City on Fire is chock full of bold moves. Some of the timeline and character shifts left me mentally gasping. At times, a piece of mystery will resolve in one sentence; Hallberg trusts the reader to pay attention. The book is also subtly self-referential, as the City is described in ways that apply to the very book you're reading.

As I skimmed published reviews of the novel, I noticed that many reviewers thought the book was too long, that parts dragged, that it needed a good pruning. I strongly disagree: the length is essential to the book. How can you re-create the outsized City, with its millions of lives living in intersecting universes, in a mere 400 pages? The book is mammoth because the City is mammoth.

Hallberg's writing is richly descriptive and very precise. This, too, recalls a contemporary version of Dickens. While the reader is trying to solve the mystery of the plot, the characters are trying to resolve the mysteries of their lives -- their family secrets, their own pain, their contradictory and irascible love, their acceptance of themselves. These are complex matters that demand complex thought and writing. Perhaps some readers would tire of this, but I loved it.

This review in the New York Times mentions Don DeLillo's Underworld and Tom Wolfe's Bonfire of the Vanities as two antecedents of City on Fire. Well, there's New York, and there's a blackout, and there's great wealth and abject poverty. But Hallberg gives us something that neither of those works do, but that Dickens always did: humanity, hope, and a measure of redemption.

City on Fire joins E.B. White's Here Is New York, Mark Helprin's Winter's Tale and Colson Whitehead's The Colossus of New York on my indispensable New York City booklist. Read it as soon as you can.
Posted by laura k at 8/04/2017 06:11:00 AM