what i'm watching: thoughts on re-watching m*a*s*h, one of the greatest tv shows of all time 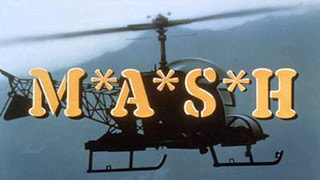 Can the comedy-before-sleep slot be filled with overt social and political relevance? We'll soon find out. After struggling through the last seasons of 30 Rock, I've rewarded myself by starting M*A*S*H from season 1, episode 1. (Thank you, Netflix!)

It's no coincidence that M*A*S*H, one of the best and most daring sitcoms of all time, first aired in 1972. It was a time of great openness and risk-taking in mainstream movies, radio, and publishing. That risk-taking extended right down to network television, bringing realism and social commentary to a level previously unseen - and not tolerated - on the small screen.

Even with that openness, no one could have made a movie and a TV show openly criticizing the Vietnam War while it was still raging. Larry Gelbart (like Robert Altman, who made the movie version), found a solution both elegant and obvious: set the action in a different war. The Korean War, fought from 1950 to 1953, was the perfect stand-in, an illustration of the maxim "comedy is tragedy plus time". We get Southeast Asia, anti-communist rhetoric, young people wounded and dying far from home - everything we saw on the nightly news. It was recognizable, yet safe.

Like most TV watchers at that time, I watched M*A*S*H religiously, often with my parents, who also loved the show. I'm guessing I stopped watching around 1980 - about the time it stopped being funny - although I did tune in for the famous final episode.

When I started the re-watch after not having seen the show in 30-odd years, I wondered, would it still be funny? Also, when it would become itself? When you re-watch a classic show, you often learn that the first few episodes, or even the entire first season, was clunky, or forced, or simply not itself yet; the writers and actors hadn't yet found the show's true voice. I was very curious to see when the show would become the M*A*S*H I remember.

The answer is: immediately. The show is itself - and funny - from the very first episode. It becomes overtly political only a few episodes later. Alan Alda, whose work as an older actor I find insufferably pompous, is a gifted star in the role of a lifetime. But then, the entire cast is perfect.

If I recall correctly, M*A*S*H may be one of the few shows that actually improved with later cast changes, becoming more nuanced and less broad. I'll find out if that perception holds up, along with my memory of the show becoming maudlin, overly sentimental, and repetitious towards the end.

The show was anti-war and anti-racist from the beginning - despite the early presence of an African American doctor bunking in "The Swamp," with the lovely nickname of Spearchucker. (He disappears after a few episodes.) And despite the adult female nurses being referred to as "girls" - as they would have been in the 1950s, when the show is set - women are portrayed as strong, competent, thinking people.

M*A*S*H isn't sexist or racist, but is it ever homophobic! This was the norm in all TV shows until very recently, but it still makes me cringe.* Even so, our hero Hawkeye is unafraid to hug, kiss, and even sometimes dance with other men in the unit.

The show may also be great for not-yet-famous cameos. So far I've seen Leslie Nielsen as a gung-ho corporal whose unit has abnormally high casualty rates, and Ron Howard, billed as "Ronny Howard". Pre-Richie Cunningham, viewers would have thought, "Isn't that the boy who played Opie?"

I'm sure my M*A*S*H re-watch will inspire several wmtc posts.

* Update. The homophobia ended in the middle of the first season. Hawkeye makes frequent joking come-ons to all the different men, either met with joking acceptance ("I thought you'd never ask") or with eye-rolling. And there are all the jokes about how hot Klinger looks, what "little number" he should wear. But no more jokes about how hilarious it is to be "one of those" men.
Posted by laura k at 8/08/2015 02:00:00 PM