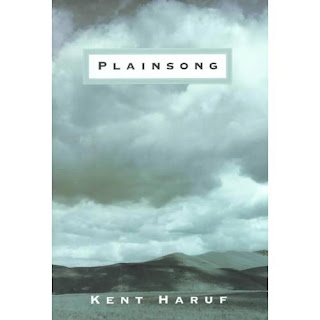 These novels are set in the rural US west, in the fictional town of Holt, Colorado. Plainsong is a small, quiet, poignant story, about how some unrelated people come together to form a chosen family. Through various characters, especially boys and men, the author explores different visions of manhood and of parenting, different paths to being a good and decent person.

A pregnant teenage girl, two elderly brothers who are ranchers, a schoolteacher whose wife has left him, two young boys whose family is in crisis, some reckless teenagers and their thoughtless, self-absorbed parents. These characters and others are set against minimal, almost elemental descriptions of rural and small-town life on the high plains.

The book had me quite teary-eyed, but not from sadness. As in life, characters do not automatically reach a happy ending, but anyone searching for connection and redemption can find it - often an unexpected form - in a fellow human.

I originally read Plainsong when it was published in 1999, loved it, then lost track of the author. Through a library customer, I learned that it was the first of a trilogy. When the author died last year, I remembered that conversation and put holds on all three books.

Plainsong was as beautiful as I remembered. I continued with Eventide (2004) and Benediction (2013). Those were very good, and worth reading, but Plainsong stands alone as a truly wonderful book. These three books are not strictly a trilogy in terms of plot and events; they are set in the same town and there is some overlap of characters. You can read Plainsong on its own with no loss or loose strings.