what i'm reading: the juggler's children by carolyn abraham 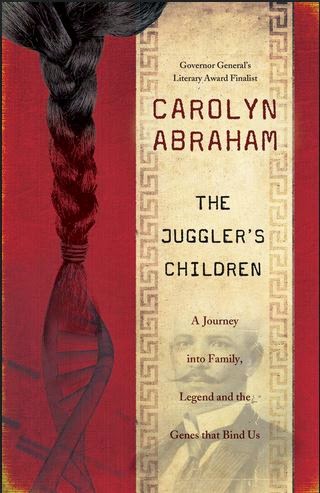 Unlike most people I know, I have little or no interest in my family's genealogy. I know the general outlines of my family background - where some of my forebears hailed from, and where they settled and what work they did when they emigrated to North America - and that's enough for me. Despite this, I very much enjoyed The Juggler's Children: A Journey into Family, Legend and the Genes that Bind Us by Carolyn Abraham. If you have a keen interest in family-history searches, you are sure to enjoy this book.

The Juggler's Children is part travelogue, part quest, and part science lesson, and Abraham is masterful at all three. The travel descriptions - to both India and Jamaica - sparkle, and the search is laced with suspense. But Abraham is a Canadian science writer, and that's the area where she most flourishes. Abraham explains complex concepts of genetics with clear images and metaphors that render them understandable to the non-scientist.

Abraham's search for her family's past coincides with the emerging science of using DNA samples in service of genealogy. Through cells gathered from a person's inner cheek, DNA tests are able to determine, within a degree of a certainty, that that person's ancestry is (for example) 25% Western European, 35% sub-Saharan African, 30% South Asian, and 10% Aboriginal North American. Each of those percentages can be further broken down, and the accuracy and certainty of these categories further enhanced, as more DNA samples are entered into more databases. The Juggler's Children unpacks the many implications of this testing - ethical, social, familial, questions of both personal and group identity.

Abraham's personal quest hinges on two men: her great-grandfathers, who she dubs The Juggler and The Captain, names as evocative and enigmatic as the scraps of information her family possess about them. The Juggler, the paternal great-grandfather, was a circus performer from China, who traveled - or perhaps fled - to India, converted to Christianity, and took an Old Testament last name. Then he vanished. Was his disappearance an altruistic act, as a recently widowed man could not care for his own children, and they were best raised by relatives? Or was there a darker, less charitable interpretation of his sudden absence from the record?

The Captain, a maternal great-grandfather, was a storied seafarer from Jamaica, who died in India. That makes at least two points where the family history intersects with India, although Abraham's relatives insist that there are no Indians in her family. Was The Captain a runaway slave... or was he a slaveowner?

As Abraham's search continues, it becomes increasingly clear that no matter how we identify ourselves - no matter what cultural and ethnic groups we belong to - we are more diverse - more mixed - than we think. And if you go back far enough, we humans are all related.

Long ago on this blog, I wrote about the book Origins Reconsidered by Richard Leakey, the son of the world's most famous paleontologists, Mary and Louis Leakey. I found reading about the first humans surprisingly moving, as I contemplated the fact that they are the ancestors of every human. In other words, all humans share common ancestry. I found The Juggler's Children fascinating in the same way. For readers with an interest in genealogy - especially with roots in India, China, or Jamaica - this is a must-read.