what i'm reading: how i live now, excellent (youth) novel by meg rosoff 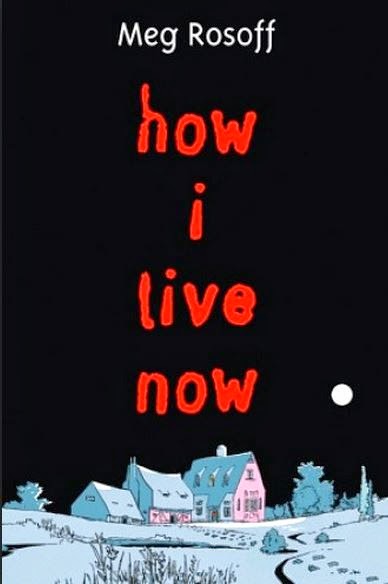 Last year, I wrote about an excellent, unusual youth novel called There Is No Dog, by Meg Rosoff. I recently read the author's 2004 debut novel, How I Live Now, and I'm here to lay down a flat-out rave review.

Most of How I Live Now is told from the point of view of a teenaged narrator, in a present-tense first-person stream of thought, with long, rambling sentences and minimal punctuation. I often have problems with quirky or immature narrators as the voice feels forced and inauthentic to me. I found some famous and popular novels unreadable because of this. In this book, however, I found the voice completely authentic and utterly compelling.

In the first part of the book, a group of teenagers and children have been left on their own, without adults. They create an idyllic, natural, peaceful world, a kind of anti-Lord of the Flies - cooperating, caring for each other, communing with nature.

Then everything changes. The children are split up, the world becomes dangerous and unpredictable. Of course, the world was always dangerous and unpredictable, but the children had been sheltered from it, as most of us reading the book are, in the course of our daily lives. Now the reality of the very scary, dangerous world is hard upon them. The teenaged narrator and a younger girl are plunged into a world of survival and loss.

There is a war. To the children, it's a war without a name, without a known enemy, and without a battlefield. Rather, without a far-off, designated battlefield - a war where every place is a battlefield, where there is nothing but battlefields: a terrorist war. Rosoff imagines what this is like, through the eyes of someone trying to survive and to protect those she loves. That is, through any of our eyes.

As I read, as the girls' journey progressed, the descriptions of war and ruin began to feel very familiar to me, from blogs like Baghdad Burning by Riverbend and books like The Deserter's Tale. An invasion, then an occupation. No electricity, no running water. (What would the implications of that be? Not a temporary power outage, but no electricity, at all. The narrator fills in those harrowing details.) Food shortages. Checkpoints. Tensions between occupier and occupied, leading to random violence and retaliation. It dawned on me that the war Rosoff describes was actually happening while she was writing it. The story takes place in the UK, but this war did happen, in Iraq: it's "us" and "them" with the roles reversed. As the familiar landscape is transformed into a nightmare, Rosoff asks us to imagine what a modern-day war looks and feels like to the people who are forced to live it.

There are many other themes folded into this slim novel. Eating disorders is a subtext, as are potential psychic abilities. As in There Is No Dog (as in the real world!) teenagers have sex, but the sex is implied with a light touch, while the intense descriptions are saved for love and other confounding emotions.

This book fits easily into the "teenage survival" subgenre of youth fiction - a crowded field - but does so without creating a futuristic fantasy world. The fantasy here is a reality that exists, somewhere, right now. That's part of what makes the book so unforgettable. And although I'm describing the war theme because I was so impressed with it, the book's ultimate triumph is the way the narrator changes and grows from her experiences, from a troubled but self-centered girl into a compassionate, resilient, resourceful young woman.

How I Live Now is a fast-paced, compelling read. Although it's technically a youth novel, if you're old enough to think about love, war, death, and the aftermath of all three, I recommend you read this book.
Posted by laura k at 10/06/2014 05:00:00 PM