what i'm reading: the book thief, an anti-war novel 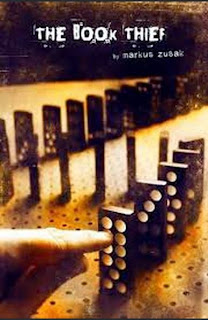 I'm sure many of you have read The Book Thief, Markus Zusak's youth novel about a German girl and her (non-biological) family during World War II. If you haven't yet read it, I recommend it.

I had little interest in reading this book. I picked it up for professional reasons: it has been one of the most popular youth novels since its publication in 2005, and I intended to skim it, to get the gist. This book didn't care what I had in mind. The opening was so intriguing that I kept reading, and before long I was completely engrossed.

In our culture, there aren't many books or movies that contemplate World War II from a German point of view. By giving us the German people during the Nazi era - their suffering, and both their defiance and their complicity - Zusak humanizes war and suffering in a way that Holocaust stories - with humans on one side, and monsters on the other - cannot. As the beautifully drawn characters develop and the situations build - as the reader identifies with these people who happen to be German - Zusak builds a case about the futility of war.

The reader is forced to face an impossible truth. For ordinary German people, simply having an iota of compassion for a Jewish neighbour - simply being seen as less than brutal, or not completely loyal to the brutal regime - could destroy a person's livelihood and family. Trying to feed a starving Jew could result in torture or death, or leave one's family marked for the camps themselves.

Once the Nazis had reached a certain degree of power, there could be no real defiance. The Germans in The Book Thief can no more control Hitler than the American people could stop a former Resident of the White House from bombing Iraq.

18th Century philosopher Edmund Burke said, "The only thing necessary for the triumph of evil is for good men to do nothing". But once evil has triumphed, what can be done? In The Book Thief we see that open defiance is both impossible and futile. Acts of courage are actually rash stupidity. The only courage is in perseverance.

If this is true, how can we prevent genocide? How can we prevent fascism? The only answer seems to be: by never letting it get that far. By recognizing the earliest signs and resisting before it's too late.

Leisel Meminger, the main character of The Book Thief, could well be Anne Frank. She is a young girl, and she suffers trauma and sorrow, because she happens to live in a country where a genocidal madman rose to power. German parents cry with grief and terror as their sons are sent to the Russian front. Germans and Russians alike freeze and bleed to death there. When allied bombs fall on German towns, the people of those towns cower in terror, and they die or survive in the aftermath with grief and loss. They suffer no less because the bombs are dropped by "the good" side. And they suffer, with no control over Hitler's murderous reign. Canadians and Americans, take note. When bombs fall, it doesn't matter if they're dropped in the name of The Master Race or Humanitarian Intervention.

Not long before the sirens signaled the end, Alex Steiner - the man with the immovable, wooden face - coaxes the kids from his wife's legs. He was able to reach out and grapple for his son's free hand. Kurt, still stoic and full of stare, took it up and tightened his grip gently on the hand of his sister. Soon, everyone in the cellar was holding the hand of another, and the group of Germans stood in a lumpy circle. The cold hands melted into the warm ones, and in some cases, the feeling of another human pulse was transported. It came through the layers of pale, stiffened skin. Some of them closed their eyes, waiting for their final demise, or hoping for a sign that the raid was finally over.

Did they deserve any better, these people?

It was Russia, January 5, 1943, and just another icy day. Out among the city and snow, there were dead Russians and Germans everywhere. Those who remained were firing into the blank pages in front of them. Three languages interwove. The Russian, the bullets, the German.

Zusak manages a tremendous feat as he builds the reader's sympathies. The reader feels unquestionable compassion and sympathy for all the characters' pain; most of them are non-Jewish Germans. Yet he makes it abundantly clear who is suffering the most. Yet the fact that the Jewish people are suffering the most doesn't lessen the suffering of the non-Jewish Germans. Zusak offers this paradox for us to accept and not resolve.

The book's unusual construction, narrated by Death itself, softens the impact on the imagination. This is an almost benevolent Death, carrying away souls in his arms. Death is an end of suffering, a final peace. This prevents The Book Thief from being too explicit, for young and not-young readers alike.

The Book Thief is not only an anti-war book. It's a story of a young girl, a new kind of family, and of the bonds of friendship. It's the story of people - funny people, nasty people, kind people, helpless people - playing out their lives amid a larger context. It's a small, family story. But it is, most definitely, an anti-war novel.

I am fond of saying that All Quiet on the Western Front is the greatest anti-war novel of all time, showing as it does the horrific suffering of the ordinary soldier through the eyes of young German soldiers. The Book Thief joins my pantheon of great anti-war novels for similar reasons.