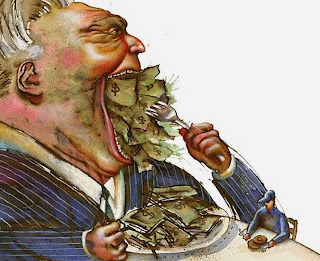 Just about one year ago today - July 8, 2013, to be exact - our area was hit with a massive flood that swamped homes, cars, highways, trains, and . . . our basement. The basement had been Allan's office. The office in which he was working to meet a publishing deadline. Stressful? You could say that.

It could have been much worse. We got an insurance settlement, and we moved - not without some hassles, but we did it, moving in to our current rental home in September.

Now, one year later, we mentioned to our current landlord that it's time to renew our lease. He said he'd come over for a visual inspection. That's his right, as he has only been on the property once since we moved in, when the dryer broke. (Interestingly, he questioned whether we had caused the breakdown through carelessness.) He also said there would be a "nominal" increase in rent.

We made a date, and he and his wife came to do a walk-through. Everything was fine, of course. A pot-light fixture has broken, and needs to be replaced. Mrs. Landlord implied that might have been our fault, just as Landlord had done with the dryer. I was puzzled, and assured her that the light bulb blew out in the normal manner, and when we tried to replace it, we discovered the broken fixture. They also saw the small garden that we had asked for permission to put in.

They said everything looks fine, and they would be happy to make a new lease. Then they said the rent would increase by $200 a month.

When I expressed some surprise, Landlord said he had much higher offers than what he was asking from us, but didn't take them because we're nice people.

I said, "Actually, you're not allowed to stop renting to us in order to get more money from new tenants."

He said, "Well, I could say I need the house back for my own use, but I won't do that. I do everything above-board."

One of the few legal grounds for a landlord to stop renting to a tenant in Ontario is if the Landlord or an immediate relative is moving into the house. So our "do everything above-board" guy is now telling us that he could lie and cheat in order to increase the rent even higher, but he won't.

Mr. Above-Board Landlord then requested that we pay the $200 increase in cash every month. Our 12 months of pre-dated cheques would be for the current rent, and the difference would be paid by cash, in an envelope.

I told him we don't mind paying cash, as long as the lease shows the full amount that we actually pay.

He said, no, he couldn't do that, as "that would defeat the purpose of the cash". Indeed.

I told him no, we would not pay one amount but get a receipt that says we pay a different amount. That would leave us unprotected if "anything happened". (To myself, I thought, What kind of idiots do you take us for? Did you really think we'd be that stupid?)

This applies to most units built before 1998. (Amazingly, for units built after 1998, there is no rent control. I could see a higher percentage, but none? I hear we have Mike Harris to thank for that.)

In addition, tenants must be informed of any rent increase in writing, with at least 90 days' notice.

If a landlord seeks to raise the rent more than the allowable rate, she or he must apply to the Landlord-Tenant Board for an exemption. Exemptions may be based on large-scale renovations or tax re-assessments, neither of which apply here.

A few calls to the City revealed that the house we rent was built in 1993.

We informed Mr. Above-Board of the current allowable rent increase, the notice period, and the requirement to inform us in writing.

Now the ball in his court.

I will not be at all surprised if he now informs us that a family member is moving in this house. I say: let him try it.

He has one son in university in Ottawa, another son who is 12 years old. This house has been a rental unit for many years. If Mr. A-BLL now produces a mystery relative who suddenly needs the house - after tenants balk at a 10.5% illegal rent increase - and after he tried to get that increase in cash, under the table - and after he said the property was fine and he was happy to renew our lease - it will look mighty suspicious. I'm thinking the Landlord-Tenant Board can see through that.

One interesting sidenote: had Mr. A-BLL asked for a $50 rent increase - still more than the legal allowable percentage - we probably would have paid it without question. It was only his greed that caused us to investigate and push back.