all working people must mobilize against right-to-work laws. but will we? 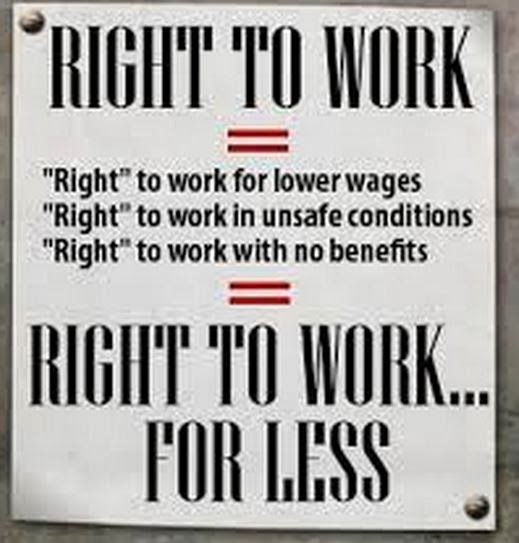 It's no secret that Tim Hudak, who wants to be Ontario's next premier, wants to break every union in the province. So-called right-to-work legislation - the name has been a persistent and successful piece of propaganda, used everywhere without quotes - is at the centre of Hudak's campaign agenda.

Will Ontario become a "right-to-work" province? Will Hudak become the new premier and succeed in dismantling Ontario's unions?

It's a prospect that frightens me deeply.

If every unionized worker in Ontario would join the fight against right-to-work, we'd win.

And if every worker who benefits from the presence of union workplaces joined the fight, we'd win for sure, because that would be all workers. People who benefit from unions far outnumber the people whose own economic interests cause them to oppose unions. That is, working people far outnumber the ruling class.

So many union members feel let down - worse than let down, they feel fucked over - by union leadership that imagines its role is to keep businesses functioning smoothly - conciliatory leadership that readily agrees to concessions and clawbacks and lower wages - that the members honestly can't say what their union membership means, or what their dues buy them.

Those are the cynical, and they've earned their cynicism, thanks to so-called union leaders who haven't represented their interests.

Other members would be perfectly happy to let others pay dues while they reap the rewards of collective bargaining agreements. They'd think they were very clever, getting a good deal, and look down on their dues-paying co-workers as suckers. Those are the freeloaders.

On the nonunion side, so many working people don't understand that they benefit from the presence of unions every day of their lives, as unions have raised workplace standards, salaries, and standards of living for all working people - not just historically, but right now. We've all seen the posters and slogans, like the button pictured here. But so many people imagine those gains are history. They imagine that child-labour and minimum-wage laws are permanent. What have unions done for you lately?

Here's an example of what they do. I am employed by the City of Mississauga. Only a small portion of City of Mississauga employees are unionized - library workers, transit workers, and a few others. When it's salary increase time, historically, the City has given its nonunion workers a slightly larger increase than their unionized workers. They want to keep the nonunion workers happy, so they don't get any ideas about forming a union! (By the way, they're not happy. Their working conditions are not good.) That is how unions help all working people: by raising standards.

But many or most people don't see that. Those are the ignorant.

Finally, there are the nonunion workers who believe anti-union propaganda, whose jealousy, greed, hatred, and general discontent cause them to align themselves with the ruling class, against their own interests. These are the people who post anti-union comments on news stories, saying things like, "It's time to end menial jobs earning CEO salaries!". Really. People say this.

Those are the diehard right-wingers. There's no talking to them.

Between the cynical, the freeloaders, the ignorant, and the right-wingers, I am frightened for the future of Ontario workers.

But there is some hope.

Tim Hudak hasn't won anything yet. Do Ontarians really want the return of Mike Harris?

Unions are mobilizing their memberships for fightbacks.

This is a bargaining year for many public-sector unions, and that's the time when membership is most active.

I keep thinking of what Chris Hedges said, when he was in Toronto last September. I quote my earlier post.

While talking about the differences between Canada and the US, and the relative strength of organized labour in each country, Hedges asked, "Do you have 'right-to-work' laws here yet?" The audience answered that we do not. And Hedges replied: "The minute Harper passes those laws, if you guys don't have a massive general strike, you're finished." He said, "You still have enough organized labour in Canada to mount a resistance."

When asked about the general strike during the Q&A, Hedges said that any and all civil disobedience is important. He mentioned the organizing fast-food workers as an important piece of resistance. "Anything that messes them up is good," he said. "Anything that interrupts the mechanisms of how they make money."

Again invoking the image of a terrified Nixon, Hedges wondered, what would happen if the French government announced that university tuition was now $50,000 per year? We don't have to look all the way to France for the answer: look at Quebec.

For the details on what's wrong with Hudak's plan, I'll re-post these two excellent letters in the Toronto Star.

So Tim Hudak is going to save Ontario. He is going to freeze the public service. Perhaps he didn’t notice that freezing the public service wages over the past five years to give tax breaks to corporations did not create jobs. Instead we lost 45,000 jobs last month. What did Kellogg’s and Heinz do with their tax windfall? Those two stalwarts of Ontario called the moving trucks.

He is going to create one million jobs. That would be 400,000 more than we need, or will the unemployed need two jobs to make a living at those created? His plan to reduce public sector jobs and replace them with low-paid private sector jobs will not help the economy and training for skilled trades won’t produce workers for these former government jobs.

Maybe by driving down the standard of living Mr. Hudak believes that he can lure back some of the manufacturing jobs other Tory governments helped leave Ontario. Surely cutting the green energy subsidies won’t create but will eliminate skilled jobs. Training skilled workers is a great idea if there are jobs for them to go to after the training.

Hudak has no plan for reducing energy costs even though he cites this as a reason for job losses. Too many friends at OPG?

He is from an era where cutting taxes was the mantra to create jobs. Employers who get tax cuts keep the money. They rarely invest in job creation without government welfare assistance. Families that get tax relief need the money to meet rising energy and fuel costs. Tax cuts will not now, nor have they ever, created jobs. Ideas from the 20th century that didn’t work then definitely won’t work now. Ontario has a business friendly tax structure and we are still bleeding jobs.

Do we need recycled Mike Harris ideas? I think not. Hudak’s plan is to continue the Conservative ideology of lowering the standard of living for working Ontarians and giving more to the 1 per cent will not save Ontario. We need to concentrate on the economy with 21st century solutions that will create sustainable jobs that pay above the poverty line.

I am wondering what exactly Ontario Tory leader Tim Hudak is referring to when he states, as part of his five-point plan for improving Ontario’s economy, that he will “end the bureaucratic runaround that inhibits job creation.”

Laws that favour business owners and resource developers over Ontario workers and citizens line the pockets of the rich while eroding quality of life for average Ontarians.