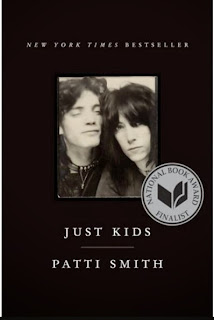 Just Kids is a memoir by the artist and musician Patti Smith, about her life and relationship with the artist Robert Mapplethorpe. The book is a memoir of both Smith's and Mapplethorpe's coming of age as artists, and of the path of their relationships, both with each other and with other people who were formative in their young lives. Just Kids is also a memoir of New York City in the 1970s, especially of certain slices of the art and music scenes.

Although Smith met and hung out with many famous musicians, artists, and writers during the time she writes about, Just Kids doesn't have a gossipy, name-dropping feel. Smith isn't saying, "Look at all the famous people I've known"; she shares interesting interactions she's had with noteworthy people. For example, when Smith takes 55 cents to the Horn & Hardart automat with a craving for a cheese-and-lettuce sandwich, only to find the price has gone up, the person who offers her the missing dime is the poet Allen Ginsberg. Ginsberg, who thought Smith was a boy that he might chat up, asks Smith if she's male or female. We see the scene with sweetness and warmth. When Ginsberg asks, "What will you say about how we met?" Smith answers, "That I was hungry and you fed me."

That is typical of Just Kids. Smith writes with warmth, respect, and love for almost everyone. Even if a relationship went awry or ended badly, Smith finds the positive, not in a strained, Pollyanna-ish way, but out of a genuine appreciation for the many experiences that helped her learn and grow. Smith's voice is modest, sober, respectful, and often innocent, almost naive. The book is intimate, but not explicit, focusing on love rather than sex.

Through most of the book, Smith is not a rock musician, and has no dreams of becoming one. She makes visual art, writes poetry, and doesn't even think about performing. Mapplethorpe creates jewelry and art installations. The man who would become a world-famous photographer cuts photos from magazines and re-purposes them in his own art. Together, Smith and Mapplethorpe support each other as each discovers their true artistic path. This is the story of a joined voyage of self-discovery; as Smith puts it, they were artist and muse, with both playing both roles.

Reading Just Kids, you would never know that Smith was a bold, brash, hyperkenetic rocker, that she was compared to a young Mick Jagger for her stage presence and frenetic energy. For most of the book, Smith is shy and socially awkward; she describes herself as a "skinny wallflower". She frequently mentions The Rolling Stones and Bob Dylan as her two primary rock influences, along with the poet Arthur Rimbaud and a host of other artists, such as Freda Kahlo and Edith Piaf. Early on, Smith mentions seeing The Doors' Jim Morrison perform, and thinking, "I could do that." Indeed, she could, and she did. Morrison and Smith, although they never met, are forever linked as the performers who brought spoken-word poetry to hard-edged rock-and-roll.

The stories from Smith's early life are poignant and illuminating. Working in a New Jersey factory, pregnant at 19 years old and surrendering the child to adoption, Smith hungered for a fresh start. She packed her few belongings in a plaid suitcase and boarded a bus for New York City, planning to stay with some friends who had moved to Brooklyn. But the friends had moved, and Smith was all alone. She slept in doorways and in Washington Square Park, scrounging for change, and hungry all the time. She searched for work that would sustain and not degrade her, eventually finding a job in Brentano's, a famous New York bookstore. She learned how to scour New York's many used bookstores for treasures that she could sell to private collectors for a small profit that would pay for food or rent.

Smith and Mapplethorpe meet by happenstance, and become the most important people in each other's lives. They live at the legendary Chelsea Hotel in a tiny room with their art, their dreams, and their hungers, and very little money.

Mapplethorpe was later and famously gay, and some readers might hope for some salacious details of Smith and Mapplethorpe's relationship; they'll be disappointed. There's no explicit sex. Smith refers to "romantic involvements" only obliquely, and keeps her most private life private. She refers to the "dual nature" of Mapplethorpe's sexuality and, later, to the S&M imagery in his work that she accepted but didn't understand.

In an afterward, Smith writes that Mapplethorpe asked her to write their story. She compares the pair to Hansel and Gretel, venturing into the dark and scary woods together, with "temptations and witches and demons we never dreamed of" and "splendor we only partially imagined".

Smith's writing is sometimes clear and precise, sometimes poetic, sometimes a bit mystical. She has the songwriter's knack for unusual phrases, describing someone with "a cowboy mouth" or saying, "He had that human saxophone thing" (whatever that means!).

I was a teen when punk was born, and saw Smith perform several times. I had a poster of the famous cover of Horses on my wall wherever I lived; I was fascinated with Smith, even idolized her for a time. I didn't follow her career as a poet or a visual artist, but she remained an iconic figure to me, especially in her deep connection to New York City, the New York City of my youth. So naturally, Just Kids was very compelling to me. Would this book be interesting to someone who doesn't already know Smith, who isn't familiar with the New York City art scene? Although I can't say for sure, I doubt it. In fact, for readers who aren't familiar with some of the references - if you don't know what the Chelsea Hotel or CBGB is, or who Sam Shepherd is - it might not even make sense.

This is not a book about Patti Smith, rock musician. In a 288-page book, Smith doesn't meet Lenny Kaye, the man who would become her rock partner, until page 179.  (Kaye was working in a record store on Bleecker Street. That's what I mean: if that doesn't strike you as a romantic and beautiful image, this book may not be for you.) When Patti Smith and Fred "Sonic" Smith leave New York City to launch their rock career, the book ends. It is all innocence and awakening and self-discovery, without the harsh realities of compromise and commerce and all that follows.

Smith does give you a glimpse into the birth of the punk movement, in this beautiful passage.

We imagined ourselves as the Sons of Liberty with a mission to preserve, protect, and project the revolutionary spirit of rock and roll. We feared that the music that had given us sustenance was in danger of spiritual starvation. We feared it losing its sense of purpose, we feared it falling into fattened hands, we feared it floundering in a mire of spectacle, finance, and vapid technical complexity. We would call forth in our minds the image of Paul Revere, riding through the American night, petitioning the people to wake up, to take up arms. We too would take up arms, the arms of our generation, the electric guitar and the microphone.

Just Kids has something in common with that greatest of personal essays, the one I seem destined to blog about every few years, Joan Didion's "Goodbye To All That". (Thank you to Julia Allison for putting the essay online, a much better link than I've used previously.) One passage in particular reminded me of the famous line that breaks my heart: "Was anyone ever so young?". Smith writes:

Where does it all lead? What will become of us? These were our young questions, and young answers were revealed.

It leads to each other. We become ourselves.

Just Kids is a quintessential New York story, and there's a subtext that, as a former New Yorker, I find inexpressibly sad. Throughout New York's history, there have always been pockets of cheap housing which enabled artists to live cheaply and focus on their work. The city was a magnet for young artists of all stripes; that was part of what gave New York its energy and edge. Artists would move into a low-income, dangerous neighbourhood, taking advantage of low rents, and they'd revitalize it. Then the neighbourhood would gentrify, eventually becoming too expensive for the people who had put it on the map. Artists would be pushed out, and another part of town would become an art mecca, and the cycle would begin again.

But the cycle sped up. Instead of taking several generations, it began to take only a matter of years. Then it sped up even more, neighbourhoods going almost directly from unsafe to pricey with barely an art scene in between. At the same time, fewer and fewer affordable neighbourhoods remained. Eventually the profit-seeking machine that is New York City cut its own throat. Although pockets of art and music scenes survive, they are tiny shadows of their thriving ancestors. David Byrne writes about it here. Smith and Mapplethorpe's story couldn't happen in today's New York. They would need a much higher income to survive, and that changes the entire equation.

There are some wonderful stories in Just Kids, about Jimi Hendrix and Janis Joplin, and Smith's pilgrimage to Paris in search of the ghost of Rimbaud, and how Sam Shepherd bought Patti Smith her first guitar, and taught her the secret of improvisation. I'll end this post with one especially illuminating story. Smith has accompanied Mapplethorpe to the club Max's Kansas City many times, but she is not comfortable socially, and no one pays much attention to her. Someone makes a snide remark about Smith's hair, which she always wore long, straight, and parted in the middle, like a folk singer. Although Smith tries to shake it off, and although she feels silly for caring, the comment stings. In frustration, she looks at photos of The Rolling Stones and takes a scissors to her locks, trying to cut her hair like Keith Richards'. She shows up at Max's sporting her new haircut, and suddenly, Smith is the talk of the club. Everyone wants to hang out with her. Everyone wants to see her work. Everyone suddenly pays attention. Because she cut her hair. The haircut was not Smith's "big break," but it showed her a lot about the way things work.