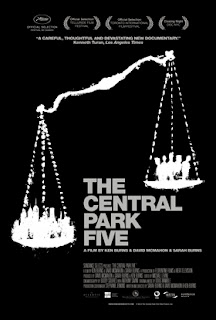 We've just seen "The Central Park Five," the Ken Burns film about five young men of colour who were wrongfully arrested, indicted, and convicted of rape and attempted murder, and who served seven, and in one case, thirteen years, in prison for a crime they didn't commit.

There was virtually no evidence linking the five teenagers to the crime, and enormous amounts of evidence showing they could not possibly have committed it. They were convicted on the strength of illegally obtained, coerced, false confessions.

In one sense, this story is one of the oldest in the United States. As former Mayor David Dinkins says in the film, it's Emmett Till. In another sense, that this happened in the late-20th-Century New York City still has the power to shock.

I feel connected to the events depicted in this film through the timeline of my own life. Even before watching it, I could recall every detail. The "other rape" that occurred the same night, of the black girl who was thrown off the roof in Brooklyn. The real Central Park rapist raping someone else, stabbing her in the eye, as five innocent young teenagers were interrogated and bullied and coerced - without an adult present, without being read their rights - into confessions.

I remembered Linda Fairstein and Elizabeth Lederer, how I used to admire them. In the movie, one of the young men describes how he thought of his father as a superhero. That's how I thought of Linda Fairstein, a woman who prosecuted rapists and murderers, and wrote crime novels to boot. I won't say that Fairstein never did good for the world, but for me, her complicity in this nightmare taints everything she has ever done or ever will do. She helped rob these boys of their lives, and allowed a serial rapist to continue to prey.

I remembered, years later, when I met Trisha Meili, her halting speech, her occasional blank stares into space. I remembered Meili describing how she learned how to talk again, how to add simple numbers, how she struggled to remember her old life. In the early 2000s, she described her brain damage as permanent.

I remembered reading details of the assault that were only made public after the original convictions were overturned: how Meili was tied up with a rope with complicated knots, how the drag marks at the crime scene were only 18 inches wide. Clearly not the marks of five or more teenagers on a crime spree.

In 1989, when "the Central Park Jogger" was raped, I had just begun to come out of the closet as a rape survivor. I was volunteering with an anti-rape group in Brooklyn called BWARE, my first foray into the anti-violence world. When CNN and other media came around, looking for survivors and activists to talk to, organizers sent them to me. (My segment was bumped because of the Tiananmen Square massacre! We didn't have cable TV and I never got to see it.)

The anti-violence-against-women community was rocked by the case, not so much by the rape itself as by the reaction and the aftermath. Brooklyn alone was logging three or four reported sexual assaults per day - and it's thought that anywhere from one in five to one in ten rapes are reported - but the media treated this as a rare anomaly. We were horrified at the racism permeating all discussion of the attack. We were heartbroken for the survivor, but we were heartbroken for every survivor, not only the young white professional who was supposedly assaulted by dark-skinned "monsters," as the young suspects were frequently called.

More than a decade would pass before I met Trisha Meile, after her book came out, and she attended some meetings at SAVI, the anti-violence group I worked with, and then later spoke at a SAVI fundraising gala. Many of us were surprised to realize that Meile didn't identify as a rape survivor; because of the traumatic brain injury she sustained in the assault, she has no memory of it. She identifies much more strongly as a survivor of traumatic brain injury. She very generously donated time to SAVI and spoke at the gala, and she acknowledged the great support she received from SAVI and from other rape survivors. But our experiences were worlds apart. While the rest of us had to learn to live with our memories, Meili had to learn to live without them.

A film that doesn't need to exaggerate, but does

"The Central Park Five" is an excellent movie in many ways. It demonstrates quite clearly how people come to make false confessions, and it makes fully clear the gross injustice done to the five men and their families by New York City police and prosecutors.

"The Central Park Five" is also a flawed movie, in ways that may seem minor but which bothered me. The film's opening depicts New York City in the 1980s as a crime-ridden wasteland, where residents scurried from home to work and back again, breathing desperate sighs of relief when they made it safely. I lived in Brooklyn and commuted to Manhattan during this time, and I can tell you, that is just bullshit.

Much of the footage the filmmakers used in this sequence seems to have been from the 1970s, when the state of decay was much more obvious. The film goes so far as to show scary-looking subway cars covered in graffiti, something very rarely seen in the 1980s. There was crime, of course, most of it in low-income neighbourhoods. A few people interviewed in the film do make that point. That has always been, and still is, true.

When the story of the vacated convictions broke, a co-worker of mine - a rabid rightwinger - absolutely refused to believe that the teenagers were not guilty. No matter what the evidence, he remained convinced that the boys were set free "for political reasons". I saw evidence of this man's racism on a daily basis. The (false) story of this crime and punishment meshed perfectly with his worldview, and no amount of evidence would change that.

At the end of the film, historian Craig Steven Wilder contrasts the media frenzy at the arrests, prosecution, and convictions with the relative silence - no more than a murmur - when the truth was revealed. It just wasn't a juicy story.