For Canadians who fear and distrust the steadily growing militarism suffusing the culture of our country, two recent books are indispensable: What We Talk About When We Talk About War, by Noah Richler, and Warrior Nation: Rebranding Canada in an Age of Anxiety by Ian McKay and Jamie Swift. 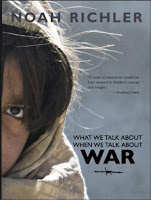 Richler's book focuses on the re-writing and re-framing the distant past. And as the title (with its homage to Raymond Carver) suggests, Richler focuses on language. He analyzes how Canada's image of itself, in relation to war-making and the military, has been radically altered, bit by incremental bit.

The book is not a play-by-play of the process; Richler assumes you know the general outline and the major players. It's a deep analysis of the language and symbolism of a right-wing cabal intent on discrediting Canada's history of peacekeeping, and changing its national self-image through revisionist history, from the War of 1812 to Vimy Ridge to Remembrance Day, right on up to the recent "mission" - never a war, merely a mission - in Afghanistan.

The forces behind this movement shouldn't be powerful enough to affect such a massive and wholesale change. But they (a) are unchallenged on a wide scale, (b) are echoed uncritically in the mainstream media, and (c) emanate from government or with the weight of government behind them.

McKay and Swift's book is also dense and veers towards the academic. Where Richler looks to the past of Pearson and peacekeeping with a clear admiration (although with his eyes open, and not uncritically), McKay and Swift see Harper's Canada as exchanging one set of myths for another, more dangerous master narrative.

Both books site the same group of academics, militarists, journalists, and politicians, ubiquitous in the Canadian media to anyone who has followed this shift: Bercuson, Granatstein, Hillier, Blatchford, and so on. McKay and Swift call them "the New Warriors". Both McKay/Swift and Richler decry the same trends. An uncritical view of history, a mass dissemination even of a historical record that has been proven false. A discrediting of the value of discussion, compromise, and peacekeeping. Worship of all things military, coupled with the jingoistic notion that criticism or even questioning is unpatriotic, and that genuine debate about the purpose of a war somehow puts Canadian troops at risk.

Why does any of this matter? This week in Canada, we see the slogan everywhere: "Lest We Forget". It might as well say "Let's Forget". Because under Harper and the New Warriors, Remembrance Day has become a collective act of forgetting.

Forgetting that millions upon millions of lives were lost for nothing.

Forgetting veterans and their families suffering from the effects of PTSD and traumatic brain injury.

Forgetting that war has never solved anything.

Forgetting that war is glorious only for those who stay at home and make speeches.

Forgetting that the peace that Canadians enjoy was not won on a battlefield, but hammered out through compromise.

Forgetting that what made Canada a great country, what gave Canada peace and prosperity, was not war. Never was war.