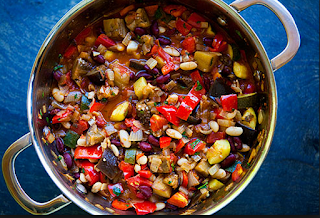 This has turned out to be one of our favourite slow-cooker meals. It's delicious, incredibly easy to make, super healthy, and inexpensive. Adapted from nowhere: it's my own.

Canned beans, properly rinsed and drained, have the same nutritional value as dried beans. They're much easier to use and work well with the slow cooker. Combined with brown rice, they make a perfect protein, and give you lots of fibre. And lots of yumminess.

Time-saving tip. While cleaning and slicing carrot, heat up the oil. Put carrot in oil to soften, and core and dice the bell pepper. Carrot goes in cooker, cover cooker, pepper goes in skillet. While pepper is softening, run onion through food processor. Pepper goes in cooker, cover cooker, onion goes in skillet. And so on; the order of vegetables doesn't matter.

Put colander in sink, and rinse and drain: black beans, chick peas, white beans, corn. Rinse and drain each can separately, put in cooker, repeat for the next can.

Add seasonings to taste and stir well. Cook for 6 to 8 hours on low, depending on how soft you like the beans and vegetables. If you're around, stir occasionally. If not, it might stick a little, but that's not a big deal.

For the healthiest meal, serve with brown rice and plain, low-fat, Greek-style yogurt.

For a more fun but less healthy take, serve with tortilla chips, grated cheddar, and full-fat yogurt, or mix a little sour cream in with the yogurt.
Posted by laura k at 6/14/2013 06:00:00 AM