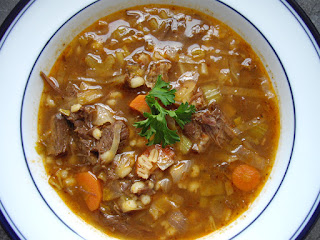 Barley is one of the four oldest grains to be cultivated by humans.* Unfortunately, whole-grain barley is difficult to find. The more common pearl barley is not a whole grain. I haven't found a convenient place to buy whole-grain barley, so I reluctantly use the pearl version. It's just as tasty and contains fibre, but lacks the full-impact health benefits of whole grains.

I don't know if it's cultural predisposition, being raised on mushroom-barley soup as I was, but to me barley's natural partner is mushrooms. I prefer the cremini variety, but you could use any kind you like.

This recipe was adapted from my friend and cooking guru Matthew Bin. I got the barley idea from Matt, but I suspect this version would be too mushroomy for him.

Brown the beef on all sides, put in cooker, cover.

Soften the vegetables in olive oil, one type of vegetable at a time, or skip this step. Add vegetables to cooker.

Add broth and wine, season with thyme and S&P according to your preference.

Cook for about 4 hours on low.

Add barley, stir, cook for another 4 hours on low. If it's too thick, add more broth.